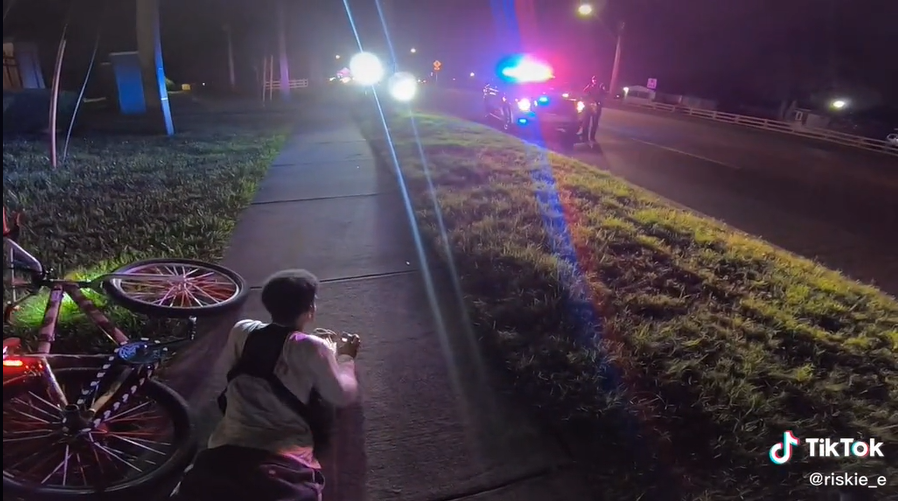 As captured by Ian Adams' GoPro camera Monday night by I-Drive, a screenshot of the viral TikTok video showing Jonathan Medina, 21, complying with Orlando Police orders to get on ground. The officers had guns drawn on the two men, mistaking them for armed robbery suspects.

Since then, OPD has released reports and bodycam footage, showing how officers followed procedure and released the men as soon as they found out they did nothing wrong.

The man who posted the video is 33-year-old Ian Adams, an electrician with a passion for cycling. He was riding that night with his friend, 21-year-old Jonathan Medina. Both men had just left their local 7-Eleven near I-Drive and were headed back home.

An OPD spokesperson said the officers were investigating a robbery, and the two friends matched the suspects’ description. A tourist had reported his golden money clip and digital camera stolen by two dark skinned men on bicycles who claimed to have a gun.

In the video, police can be seen drawing weapons, yelling at Adams and Medina to stop and drop to the ground. Medina complies immediately, but Adams takes his time.

Bodycam footage shows officers conversing, saying Adams wouldn’t listen and that he thought it was all a game, but the Guyana native said he was just trying to understand the situation and not die.

“Guns drawn and all of this yelling and screaming and anger and whatnot more,” Adams said. “So it was just like, here we go. What are we going to do?”

Adams’ GoPro camera remained on the entire time. With his earphones on playing music, several feet away from the cops, lights in his face and police yelling with guns out, he said he felt confused and hyper aware that he and his friend were on the losing side of a potentially bad situation.

OPD officers made Medina crawl to them before cuffing him and Adams.

The ordeal took almost one hour before OPD cleared the men and even apologized to them.

The amateur bike rider said he’s had previous misdemeanor charges and that he’s been tasered and chased by police in the past. But he has never had to fear being killed.

Adams did not accept the officer’s apology. He said he simply just can’t.

“No, I can’t do that,” he said. “There’s nothing in the world that no one can tell me to make me want to accept any apology from somebody who pointed a gun at me. That’s a no, no go.”

Adams said he understands the police were just doing their jobs, but he wants them to reassess their approach.

“It happened. We can’t take it back. We got to move forward,” he said. “And hopefully the cops they take it and learn from it and try to make it better.”

Having the event go viral on social media has been overwhelming for Adams, he said.

“Personally, I know I’m gonna have a nervous breakdown,” Adams said. “I just don’t know when it’s gonna happen, but I feel it. I literally feel like I’m questioning how I feel.”

But he said this experience won’t stop him getting back on his bike. He’s part of a community of amateur cyclists and likes to ride his customized, multicolored bike whenever he can.

While he hasn’t yet taken the time to process and cope with what happened Monday night, once he does, he said it’ll likely involve what he loves doing most, his “therapy,” bike riding.

“I could be going through the most horrible day, and I get on my bike, and I go take a ride, I have no worries, no problems, no bills, no nothing,” Adams said.