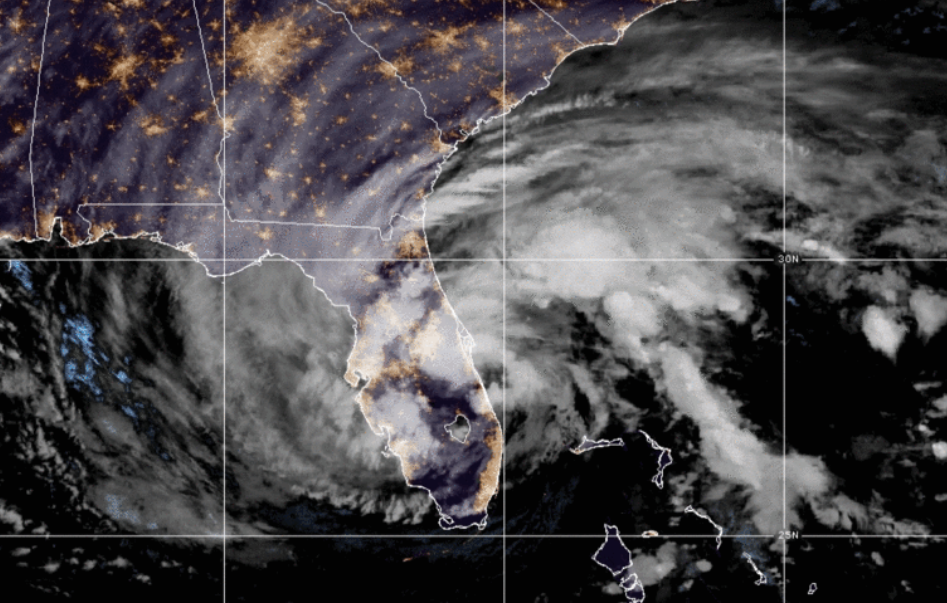 This article will be updated throughout the day. The latest post was at 5:07 p.m. with new information on airports reopening.

Nicole made landfall as a hurricane near Vero Beach early Thursday and was soon downgraded to a tropical storm again.

Here are updates from around Central Florida.

The St. Johns River has risen again to a major flood stage in Astor due to Tropical Storm Nicole.

The river was less than 3 inches below the record level on Thursday morning.

The National Weather Service also reports that water levels have risen to a moderate stage near DeLand, at Sanford, and above Lake Harney.

The river had dropped significantly in the weeks following Hurricane Ian.

As of 4 p.m. Thursday, about 225,000 electric customers were without power in Central Florida due to Tropical Storm Nicole.

As hundreds of thousands of customers throughout Florida are already without power due to Tropical Storm Nicole and many more could experience flooding before the end of the day, health officials are reminding residents to practice good food safety in order to avoid foodborne illnesses.

If there’s any doubt of whether a food item has been kept properly refrigerated at 41 degrees or lower, or if it has been contaminated by floodwater, throw it out.

Anyone who is preparing food should wash their hands, utensils and any surfaces they’re using to prepare it with soap and water.

Raw meat should always be kept separate from cooked meat. And all foods should be thoroughly cooked through.

Lynx buses have resumed some routes. You’ll find the most recent updates on the Lynx system at this golynx.com web page.

Public schools throughout Central Florida are closed Thursday because of the storm.

Major theme parks like Disney and Universal won’t welcome guests until later in the day.

Brevard County residents can call the Community Information Hotline at 211 for information regarding the storm.

Lake County public schools will be closed Thursday, because of Tropical Storm Nicole, and Friday for Veterans Day.

Two residential shelters opened on Wednesday. The shelters can accommodate residents with disabilities, pets, and the general population.

They are located at:
– Umatilla Elementary
– Lost Lake Elementary

The county has a special needs shelter in the Marion County Sheriff’s Office Multipurpose Room, 3300 NW 10th St. in Ocala.

In Orange County, two people are dead after they were electrocuted by a downed power line.

The Orange County Sheriff’s Office says it happened Thursday morning. A man was found unresponsive outside of his vehicle and declared dead at the scene.

A woman inside the vehicle was taken to the hospital, where she was declared dead.

The Sheriff’s Office is urging caution around downed power lines.

The shelters are pet friendly.

After Hurricane Ian, Orlando had sewage spills due do to wastewater systems overwhelmed with floodwater from the storm.

Now, after Tropical Storm Nicole, the city is asking residents to once again limit water use as a precaution.

Emergency Manager Bill Litton said the area has gotten about two to three inches of rain from the storm. That’s well below what Hurricane Ian brought.

And wind speeds at the Orlando International Airport clocked in at around 50 mph.

“But overall we were very fortunate with the plans,” Litton said late Thursday morning. “We’ve had a couple trees down and some power outages. I think last count, we had just over 2,000 residents without power here in the county and just some overtopping of roads with some water but no major issues with blockage of roads and those types of things.”

Litton said residents and tourists should still stay off the roads until officials give the all clear. He says downed power lines and trees are a real safety hazard.

Some vehicle crashes are already being reported in Seminole County.

The main message from emergency officials is to stay off the roads. Visibility is low and debris including tree branches have been blown onto roads.

“The conditions are just going to get a little worse,” Seminole County Emergency Manager Alan Harris said shortly before 7 a.m. “There are power outages so if you have to go to work. Please drive very slowly, very carefully. Traffic signals that are out are a four-way stop.”

Harris said there have already been thousands of power outages reported in the area and downed power lines and flooding should be expected.

Seminole County has a Citizens Information Line at (407) 665-0000. The county also urges residents to sign up for emergency alerts at AlertSeminole.org.

County officials say the shelters should be used as a last resort and cots are not provided at general population shelters.

Port Orange on the Volusia County coast is advising residents to evacuate low-lying parts of the Cambridge Canal area due to flooding.

Port Orange reported that the seawall and bank on the north end of the canal drainage system have been compromised. And the tide at Rose Bay is pushing rising water in the area.

Water levels are rising slowly, according to a city alert. High tide was expected at about 11 a.m.

Residents are advised to be aware of the potential for flooding of roads and structures.

The city of New Smyrna Beach is reporting impacts from Tropical Storm Nicole.

Standing water, storm surge, and high tide have also been reported in the Central Beachside and the Isleboro areas.

Emergency officials are asking residents to shelter in place, and stay off the roads as standing water, downed power lines and trees are making roads dangerous.

The Volusia County Citizens Information Center is open 24/7 until further notice. Residents may call 866-345-0345 for information on shelters, road and bridge closures, and additional storm-related resources.

The Volusia County Council has issued an emergency countywide curfew in effect from 7 p.m. Wednesday to 7 a.m. Thursday. The curfew exemptions include: law enforcement, workers traveling from their jobs, and all emergency workers.