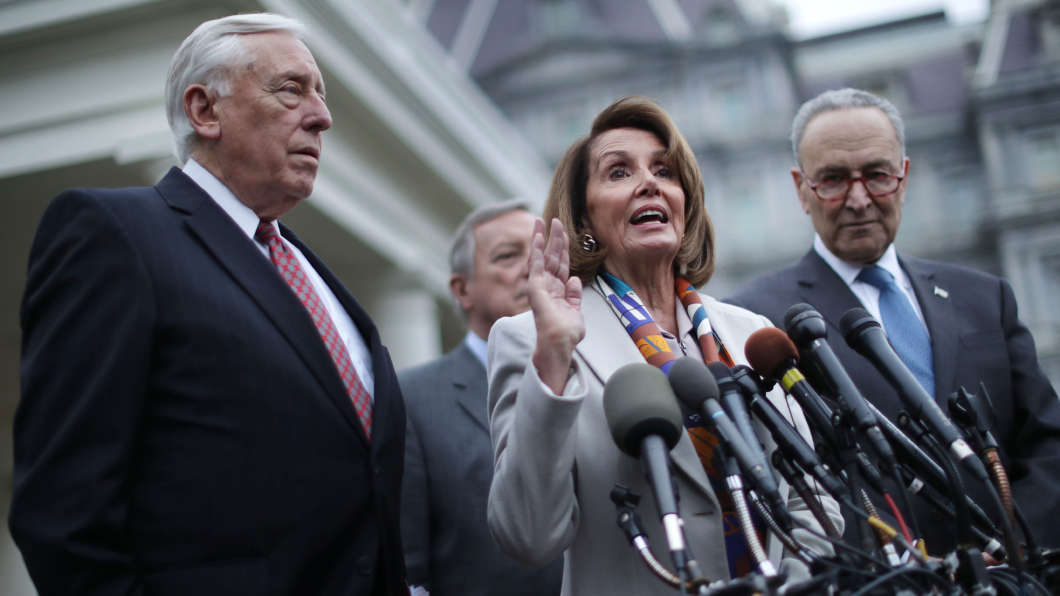 A closed-door briefing for congressional leaders in the White House Situation Room on Wednesday failed to resolve any issues between Democrats and the Trump administration over funding for border security.

The stalemate has led to a partial government shutdown, now nearing the two-week mark.

The lawmakers were invited to return to the White House on Friday to continue talks.

Democratic leaders said they pressed President Trump to accept their proposal to approve measures to fund through the end of the fiscal year those federal agencies that have run out of money and to provide a short-term funding bill for the Department of Homeland Security that would provide spending authority until early February. The proposal regarding DHS would give the two sides additional time to resolve the border security funding impasse.

Senate Minority Leader Chuck Schumer, D-N.Y., said Republicans and the White House “are now feeling the heat” over the shutdown. “It is not helping the president, it is not helping the Republicans to be the owners of this shutdown today,” Schumer said. “We gave them an opportunity to get out of that and open the government as we debate border security.”

Incoming House Speaker Nancy Pelosi, D-Calif., said Democrats “are asking the president to open up the government. We are giving him a Republican path to do that — why would he not do that?”

On Twitter Wednesday evening, the president said the day’s meeting had been an “important” one, adding that “Both parties must work together to pass a Funding Bill that protects this Nation and its people – this is the first and most important duty of government.” In a second tweet, Trump said he remained ” ready and willing to work with Democrats to pass a bill that secures our borders, supports the agents and officers on the ground, and keeps America Safe. Let’s get it done!”

Before the briefing with Capitol Hill leadership, Trump reiterated his demand for a border wall Wednesday, saying that the border “is like a sieve” and that adding drones and technology are not enough.

During a Cabinet meeting earlier, Trump said the government “is in a shutdown because Democrats refuse to fund border security.” But Democratic leaders on Capitol Hill have previously supported $1.3 billion for border security, an amount far less than the $5 billion the president has insisted on, and Democrats have refused to accede to Trump’s demand for funding specifically for building a border wall.

Trump also said Democrats are playing politics with the issue “because they have an eye on 2020.”

And the president repeated his call for a physical wall. “Everything else is bells and whistles,” he said. “I know more about drones than anybody. I know about every form of safety that you can have. It’s all good, but it’s just very minor compared to the power of a wall.”

Trump said he would keep the government in a partial shutdown “for as long as it takes,” adding, “I think the people of the country think I’m right.”

But a NPR/PBS Newshour/Marist poll taken before the shutdown began had a different finding. By a 21-point margin — 57 percent to 36 percent — Americans think the president should compromise on the wall to avoid a government shutdown.

Other members of the administration chimed in during the Cabinet meeting, with praise for Trump’s stance. Vice President Pence said, “I want to thank you for the strong stand you have taken on border security,” adding that the administration “is ready to deal, we have an offer on the table.”

That offer, however, reportedly made by Pence to Democrats for $2.5 billion for border security, was publicly rejected by Trump later in the Cabinet meeting, illustrating the difficulties Democrats face in negotiating with the mercurial president.

Lending an air of drama, Wednesday’s briefing for congressional leaders occurred in the White House Situation Room, which is normally used for military updates.

McConnell called it a civil discussion and said, “We’re hopeful in the coming days and weeks we’ll be able to reach an agreement,” an ominous sign for anyone hoping for a quick resolution to the shutdown.