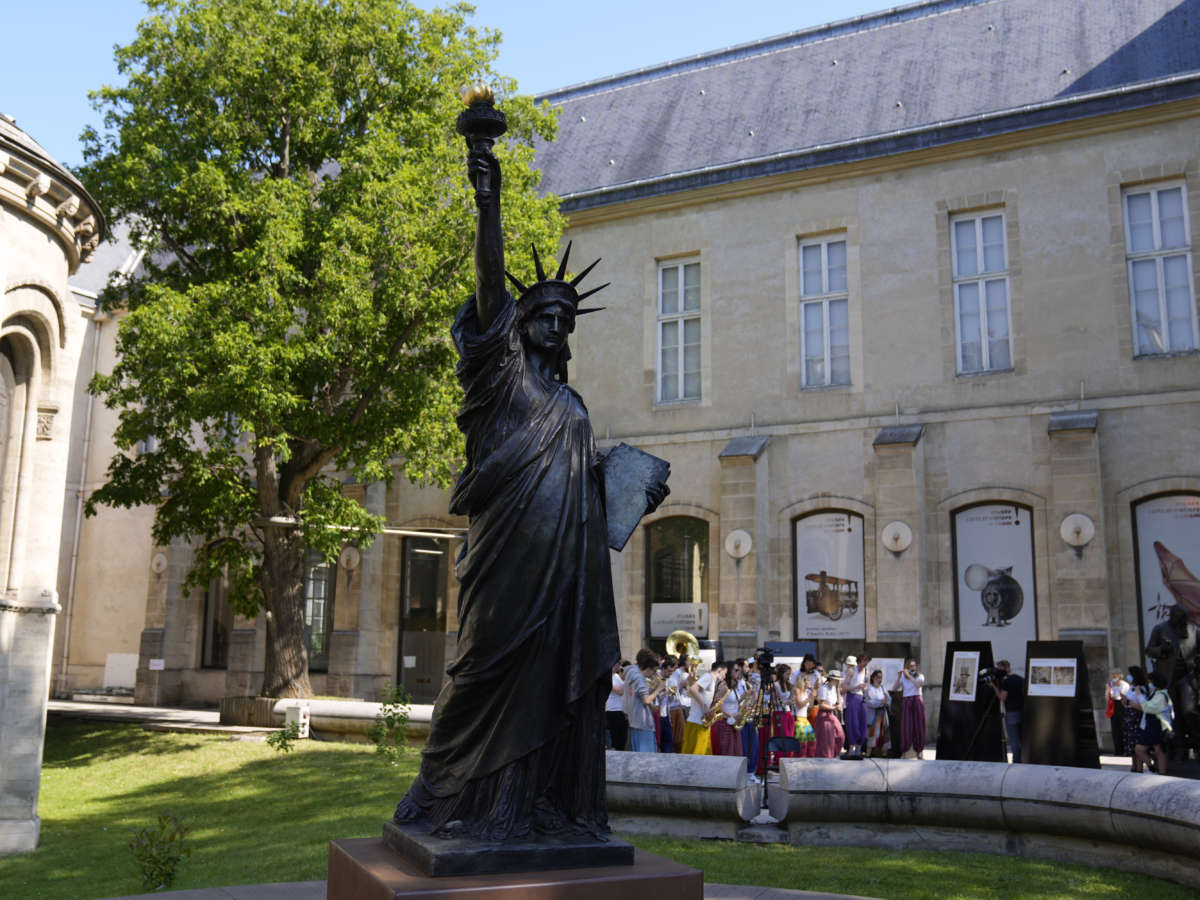 A mini replica of the French-designed Statue of Liberty will reach the U.S. on July 1. Here, the statue awaits its move in Paris on Monday.
Image credit: Francois Mori

The Statue of Liberty will celebrate Independence Day with her little sister this year.

One hundred thirty-five years after gifting the original Lady Liberty, France is sending a second, smaller Statue of Liberty across the Atlantic just in time for America’s July Fourth festivities. The bronze sibling statue, nicknamed the “little sister,” has been in France since its completion in 2009.

The statue has a lot to look up to in her big sister. Standing at 9 feet and weighing nearly 1,000 pounds, the replica is one-sixteenth the size of the original.

On June 19, the smaller sibling will board a shipping vessel in Le Havre, a port in Normandy, bound for New York Harbor and will be erected across from the original on Ellis Island after a nine-day voyage. Starting on June 20, its journey to New York can even be followed live online.

Both statues will stand facing one another from July 1-5, and then the smaller one will be taken to Washington, D.C., to be installed at the French ambassador’s residence. The “little sister” will be unveiled there beginning July 14, Bastille Day, and remain there for 10 years.

The sibling statue has spent the past decade in Paris, welcoming visitors at the entrance of the Musée des Arts et Métiers, the National Museum of Arts and Crafts. It was lifted and loaded into a special plexiglass container during a small ceremony on Monday to prepare for its trip to the states.

The 10-year loan is made possible by a partnership between the Embassy of France in the U.S., the National Museum of Arts and Crafts, and the CMA CGM Group, the shipping company that is helping transport the statue.

“The arrival of the new Lady Liberty statue will celebrate the most central value of the French-American partnership: freedom,” the organization said. “The technological, artistic, and logistics challenges to bring this new statue to America tell a modern tale of successful international cooperation.”

Created as an exact replica of Frédéric-Auguste Bartholdi’s original 1878 plaster model preserved by the national museum when it was donated by the sculptor’s widow in 1907, the statue was the first of an original set of 12 to be cast from the plaster model at Susse Fondeur, a foundry in Paris.

Pascal Confavreux, a spokesperson for the French Embassy in Washington, D.C., told NPR the statue serves as a reminder of shared values and friendship between France and the U.S.

“It’s good to go back to these core values. President Biden and Secretary of State Atony Blinken always say that they want to share values internationally, and this statue, which is at the core of Franco-American friendship, embodies that,” he said.