Listen in: Ten years after his death, where is Trayvon Martin’s place in history? 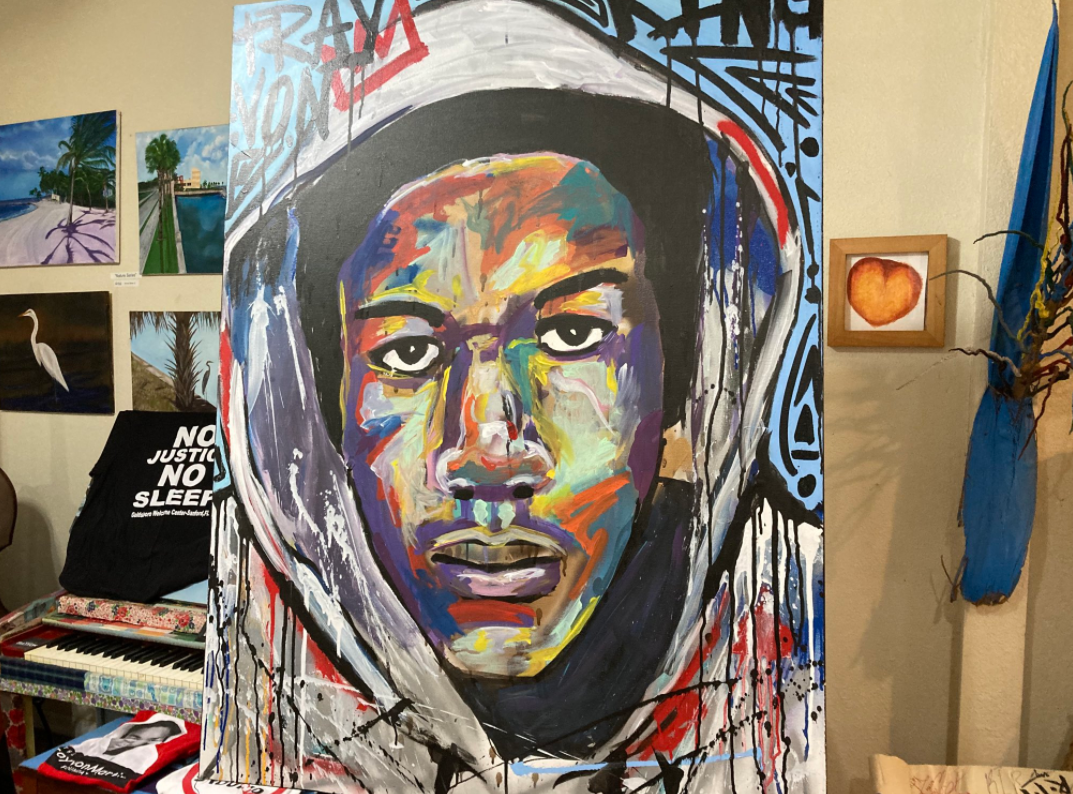 This week, WMFE is marking 10 years since Trayvon Martin was killed by a neighborhood watch volunteer in Sanford. Protests and anger took centerstage worldwide and forced us to once again examine the role race plays in America.

Martin was 17 years old at the time.

Many had hoped it would be a watershed moment. But since Martin’s death, the names and faces of Black people, who many believe were unjustly killed because of their color, have continued to grow.

Posh Baker stands inside the Goldsboro Welcome Center in Sanford in front of a giant portrait of Trayvon Martin.

The 17-year-old’s face is painted in rainbow colors like the Skittles candy he was carrying when he was killed. His dark brown eyes seem to stare directly at onlookers. He’s wearing a grey hoodie, like on the night when he was fatally shot.

Of the many items in Baker’s archives related to Martin, from protest signs to journals written in the days after his death, she says this portrait is the one that tells his story best.

“How was a young Black man, a young Black child, almost a man that went out, and you notice the different colors to get Skittles for his brother, but left this world untimely. And you notice how the crown is in red to symbolize the blood. And I think that’s how he would be remembered as a young man that we will never know his full potential,” said Baker.

Just think of all the names we’ve come to recognize over the past few years, she says, names like George Floyd, Breonna Taylor, and Ahmaud Arbery, all Black men and women killed by the police.

Much of the outrage surrounding Martin’s death at the hands of George Zimmerman had to do with the fact that a 28-year-old neighborhood watch volunteer, who was the aggressor, could kill a 17-year-old returning home from the store with candy.

“After the verdict that allowed George Zimmerman to go free, we had hashtag Black Lives Matter that exploded in the state of Florida and then exploded throughout the country into protest. And that gave birth to what we now know as a civil rights movement, called Black Lives Matter,” said Smaw.

In the wake of Zimmerman’s acquittal, protests like the Million Hoodie March in New York took place throughout the U.S. and the world. Smaw says those protests laid the foundation for future BLM demonstrations.

“So by the time George Floyd happened, the ground was already primed. And there was already grassroots efforts that had been continuous. So people were prepared and they went out to show that they stand in favor of the things that people have been asking for: banning of chokeholds, de-escalation training, banning of no-knock warrants, requiring police wear their body cameras and have the body cameras on at all times, and many other things,” said Smaw.

The conversation around race in America continues

Aaron Bryant, a curator at the National Museum of African American History and Culture that houses the hoodie Martin was wearing when he was killed, says simply put, Martin changed history.

“In many ways we’ve had throughout history, people who have really instigated a sea change in the course of history. And I think that Trayvon Martin’s death certainly reflects, you know, that sea change as we begin to look more closely at what it means to be an American,” said Bryant.

“What does it mean to live in a democracy and whether or not to take a phrase from one of our recent exhibitions make good the promises? Whether or not we are actually living up to the guarantees and promises of American citizenship, as promised to us by the constitution? So I think that Trayvon Martin, in many ways, represents a change in history and a moving closer to the American ideal,” said Bryant.

But back at the Goldsboro Welcome Center, Posh Baker says she thinks society isn’t any closer to allowing all people, regardless of their race, gender, or sexuality to move freely without the threat of discrimination and violence.

“History will repeat itself if you do not heed its warnings and unfortunately we have not done that yet,” said Baker.

Baker points to the February killing of Amir Locke by police in Minnesota along with new voting and protest laws in Florida to illustrate that not enough has changed. She says that’s why she’s getting ready to host a tour of the museum for a local Cub Scout group. The work to pass down Trayvon Martin’s story and to enact real change continues.