LISTEN: Dolphins Use Targeted Echolocation To Plan Their Hunting Dives 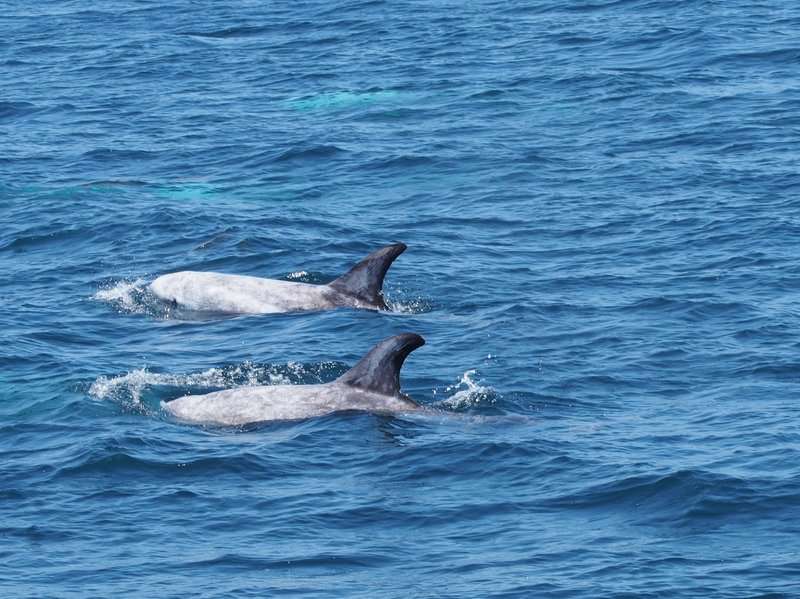 A new study suggests Risso's dolphins, which are common along the U.S. Pacific Coast, use past experiences to plan their dives for food. Photo: J. Maughn/Flickr

The central challenge of dolphin existence is that your oxygen is on the surface and your dinner is in the deep. Hang out breathing air too long and you’ll starve. Dive too deep for food and you’ll drown.

To thrive, dolphins must use their oxygen wisely. A new study of one type of dolphin suggests they do that by carefully planning each dive, using information from previous dives to predict where food might be.

The study, published Wednesday in the Journal of Experimental Biology, used a relatively new technology to record the locations and vocalizations of 33 Risso’s dolphins as they swam and hunted off San Clemente Island in Southern California. Researchers led by Patricia Arranz of the University of La Laguna in Spain used suction cups to attach small recorders to the dolphins.

The devices produced high-quality recordings of the sounds dolphins make when they are hunting. In the excerpt embedded below, you can hear the individual echolocation clicks a dolphin uses to search for food, Arranz explained via email, as well as what researchers refer to as “buzzes.”

Buzzes are “faster, lower-intensity click sequences [during] prey capture attempts,” she explained. You can imagine the dolphin using clicks to locate a squid, for example, and the buzzing as it approaches and attempts to catch the squid.

Here’s what the dolphins sound like when they’re in a group — the National Oceanic and Atmospheric Administration made this recording of Risso’s dolphins for separate research, using a special microphone placed directly in the water.

Using the recordings of individual animals, as well as detailed information about where prey were lurking, Arranz and colleagues in California and the United Kingdom set out to test the hypothesis that dolphins might be planning their dives. Such a finding would be controversial.

There is widespread disagreement about the ability of nonhuman animals to use past information (there was a fish at this depth recently) to inform future actions (therefore I should focus my limited oxygen on hunting at that depth now). A 2016 review of the scientific literature suggested that “only humans are able to construct and reflect on narratives of their lives — and flexibly compare alternative scenarios of the remote future.”

“This remains a contentious subject,” the authors of the new study write in their introduction, before laying out evidence that Risso’s dolphins were doing just that kind of planning.

The researchers found that after dolphins found success hunting at a certain depth, as evidenced by the buzzing sounds that accompany attacks on prey, they adjusted the volume and frequency of their echolocation clicks to focus on that depth during future dives.

Although it’s possible other air-breathing marine mammals have similar abilities, dolphins are particularly useful for research because they use audible echolocation, which announces their intentions.