Like Her ‘Radioactive’ Elements, Marie Curie Didn’t ‘Behave’ As Expected 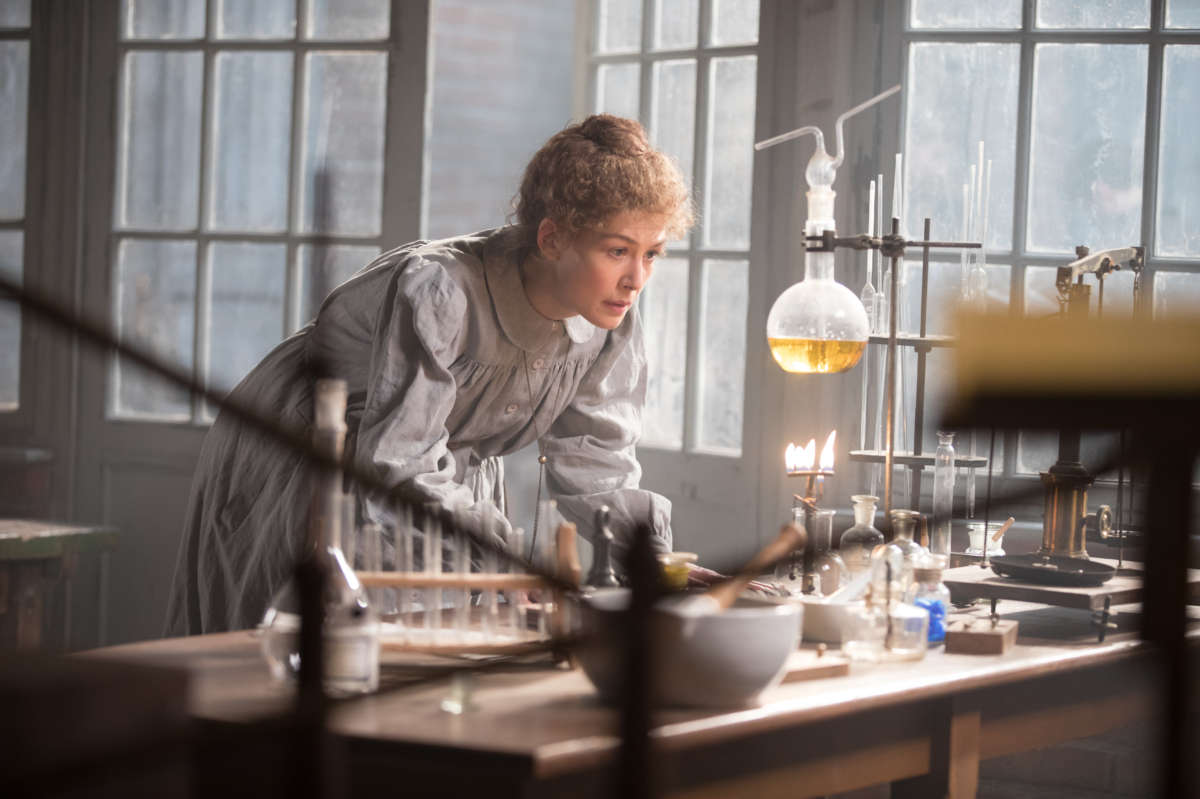 Like the elements that she discovered — polonium and radium — Marie Curie was “unruly,” says actor Rosamund Pike. Pike plays the famous scientist in the new biopic Radioactive.

The film, streaming on Amazon Prime, is about the power of science and how it can be harnessed in both positive and destructive ways. Curie’s discoveries led to medical breakthroughs, but they were also weaponized — into bombs and poison.

“[Director] Marjane Satrapi and I both had a vision of her as quite an ‘unruly element’ that does not behave as it should …,” Pike explains. She and her fellow filmmakers were “interested in really pushing how challenging we could make her, how much we could make her not conform to traditional standards of femininity.”

I’m very excited because I think there’s been a huge rise in people’s interest in science. And I think people are suddenly very, very curious as to who scientists really are. Who are these people who suddenly hold life in their hands?

She was really little more than a name that I recognized, if I’m perfectly honest. … I started having chemistry lessons … which was exciting as a female in film. Historically, a lot of my preparation has been involved, getting myself physically fit. And it was a really refreshing change to be having to get myself mentally fit.

No, in fact, quite the opposite, really. … I think it would be slightly wrong to say that she was in some way an ambassador for other women. I think women have certainly used her and celebrated her as a woman to emulate. But I think she was very single minded, maybe even narrow minded. She always seemed rather disinterested when people pointed out that she was one of very few women in the science faculty.

On the sacrifices Curie made for her work

I mean, it made me realize what it cost her — you know, the cost of pursuing one’s dreams so wholeheartedly. … I mean, when war broke out, I know that the first thing she did was take a precious gram of radium in a lead box down to the south of France where she thought it would be safe if Paris was bombed. So it really was the most precious thing in her life.

On the “wonderful love story” between Curie and her husband, Pierre

I really missed Peter and Marie when we finished filming. … I don’t think she ever got over him [after his death]. I can look at any photograph of her and know if it was pre-Pierre’s death or after. Grief is etched in her face in a different way.

[These roles] both came into my life at a similar time and … they both sort of stayed with me very profoundly. … Their lives were so complicated, brave, difficult, challenging. They had sorrows, they had sadness, and I think I took it all on, and took it all in. And I became quite confused with my own identity. I mean, it’s sort of partly what you’re aiming for, isn’t it, is to lose yourself in the character, but you don’t want to lose yourself completely. …

They were both uncompromising. … I aim to be uncompromising, I aim to make decisions that are just based on my understanding and I try not to be swayed by other people’s opinions in general — but it’s very hard to be true to that principle.

Sophia Boyd and Ed McNulty produced and edited this interview for broadcast. Beth Novey adapted it for the Web.