Lighting up the neighborhood: Two Orlando families make their street a winter wonderland 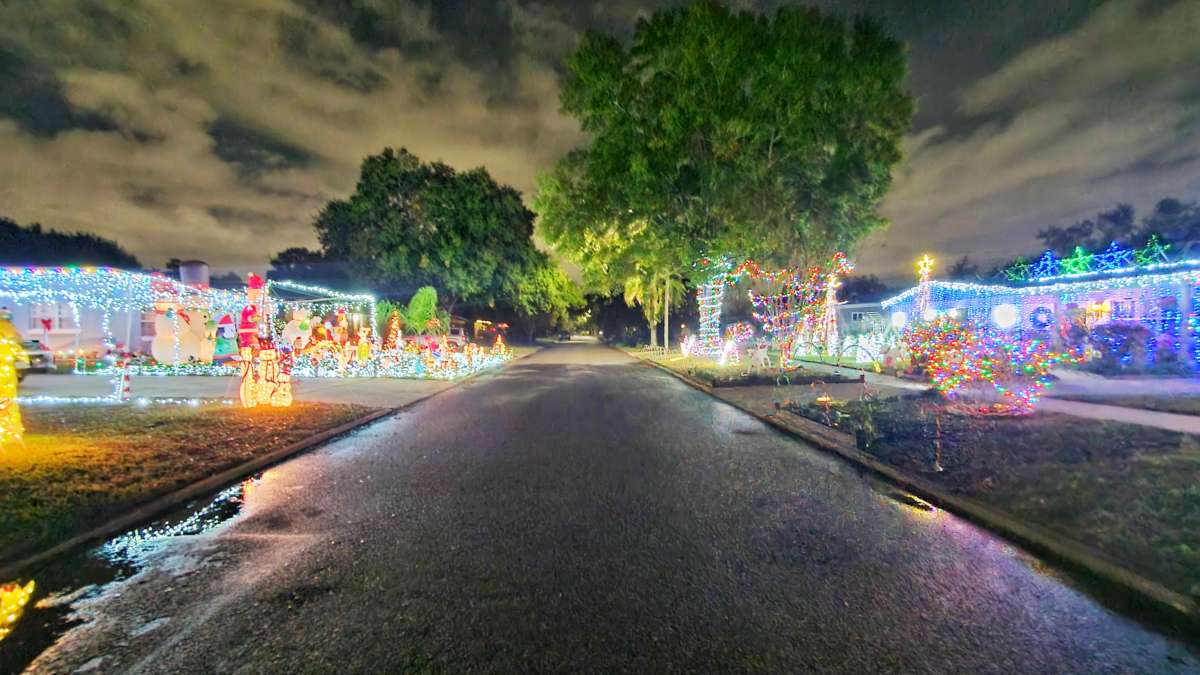 The Bells and the Byrds live across from each other on Adirondack Avenue in Dover Shores. They've been lighting up the neighborhood together for more than a decade.

We kick off our holiday series highlighting Central Floridians who work to make the world better on a small, usually quiet block in Orlando’s Dover Shores neighborhood.

For the holidays, it’s blazing with light on both sides as two families who live across the street from each other – the Bells and the Byrds – bring the neighborhood joy and delight with a “friendly competition” of increasingly elaborate decorations.

The Bells are known for their giant inflatables, while the Byrds have a moving light display programmed to dance along with holiday music pumping from hidden speakers. There’s even an animated Santa Claus face whose mouth moves like he’s singing the tunes.

Both families say the decorations are ultimately a labor of love for Central Florida kids.

Karisa Byrd and her husband John, an audio-visual engineer, have a series of lighted arches that look like waves leaping in time to the music, along with large stars standing tall in a line at the peak of their roof. The rest of their yard is populated with wooden or inflatable Disney characters, snowmen, reindeer, a toy shop storefront and spirals of lights shaped like Christmas trees.

“The ‘dancing’ part of the lights has gone up probably five, six years, maybe – that’s the lights hooked up to music,” says Karisa Byrd. “But lights in general, you know, the National Lampoon’s [Christmas Vacation movie] kind of lights, has been since we moved in, which has been 14 years.”

It’s been about the same amount of time for the Bell family across the street. Their front yard is a snowy wonderland of white LED lights, upon which stand immense inflatable snowmen, Santas, and gingerbread men, many stretching taller than the icicle-lined roof of the house.

Gazing over this year’s new addition of sparkling arches atop the driveway, professional landscaper Timothy Bell is quick to point out that the two families are a festive team.

“We work together as neighbors and friends,” he says. “What we do is not a rivalry. It’s not like a competition.”

“I would say it’s more of a friendly competition,” smiles Karisa Byrd, a prekindergarten teacher. She gives a quick rundown of what she says are her husband’s preferred rules for the friendly competition: “We’ve got to get set up first. And we’ve got to have new things each year. And we have to see what they have, versus what we have. And no duplicating, or any of that.”

All of these “rules” are tongue-in-cheek. Bell expresses the guiding philosophy for both houses when he says, “Every year, we try to go bigger.”

While the Byrds did fork over a bit of money for two of their centerpieces, for most of it, they’ve gone DIY in some clever ways.

“The stars are just wood. We just nailed them together,” Byrd says. “And the little trees, those are just tomato cages. They’re tomato cages that we zip-tied at the top, and then wrapped the lights around.” The dazzling leaping waves are simply PVC pipes, covered in tightly woven lights.

Both the Bells and the Byrds agree – all the work is worth it to watch the delighted reactions of neighborhood children.

“Seeing the kids come, and they’re excited, and they’re pointing out each of the characters or the song or the lights…it’s just awesome to see their little faces,” says Byrd. “They come and they dance and they’re like, ‘Oh, we love it!’ And oh, I love it, too! I’m so glad that we’re making them happy, as well as it makes us happy.”

“Last year, with the COVID stuff going on, kids didn’t want to get out and take pictures,” Bell recalls. “So this year, I’m happier that kids can actually walk up now and look at these lights, get to touch them, take pictures. It brings us joy. That’s why we do it, every year.”