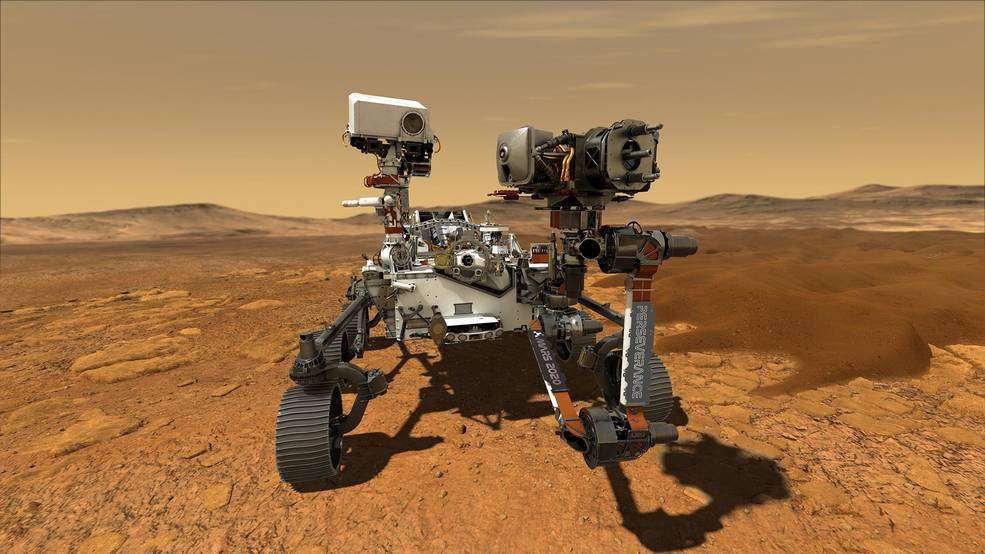 This is an illustration that depicts the Perseverance rover on the surface of Mars. Photo: NASA

A robotic explorer more than 190 million miles away from Earth is celebrating its first year on Mars. The car-sized robot is searching for ancient signs of life on the red planet, and hopes to send back chunks of rocks from the crater it now calls home.

The rover began its journey on Jul 30, 2020, blasting off from Cape Canaveral in Florida. It took about seven months to reach its destination — landing on Feb 18, 2021.

LISTEN: Hear about Perseverence’s first year on Mars and what’s ahead for NASA’s robotic explorer on WMFE’s Are We There Yet? podcast.

NASA’s Perseverance rover aims to characterize the planet’s geology and climate. Perseverance will collect over 30 Martian rock samples and NASA plans to send them back to Earth within the next decade.

“This rover is an incredibly ambitious mission,” says Briony Horgan, a planetary scientist at Purdue University and scientist working on the mission. “NASA is asking us to drive more, drill more, and do more than any space mission ever.”

Horgan works with the eyes of the rover which she uses to scout the area to see where to send the rover next. The rover is currently exploring Jezero crater, which is about 29 miles wide.

“We started getting back some early images, just from where we are right now, of the valley,” says Horgan. “It really is like Monument Valley on Mars. It’s fantastic.”

Scientists think the crater was once filled with water — fed by ancient Martian rivers. That’s important to searching for life. Astrobiologists believe water is the key to life in the universe and searching an area once believed to be filled with it could yield evidence of Martian microbes.

“We’re seeing lots of great signs that Jezero crater was a very habitable environment for ancient microbes,” says Horgan. But exploring on the surface isn’t enough for scientists. They want to get their hands on samples of Martian rocks to test for these microbes back here on Earth. Perseverance is laying the groundwork for that mission by collecting samples of dirt and rocks from the surface.

“It’s amazing to realize that we’re doing all this work to get this piece of rock 150 million miles back to Earth, right, as someday I could actually hold this rock in my hand” Horgan said.

Perseverance successfully collected six of these rock samples and can collect up to about 40. These rocks will launch off the surface of Mars and make the trip back to Earth, hopefully by 2031.

It may be lonely to roam unknown lands, but Perseverance is not alone. The rover brought with it a tiny aircraft named Ingenuity. The helicopter hitched a ride under the rover and it accompanied the Perseverance to Mars.

Ingenuity was sent along on this mission to test out controlled flight on another planet. With that mission objective complete, it’s now helping the rover explore Jezero crater.

“There’s places that are hard for the rover to go to,” says Perseverance deputy project manager Rick Welch. “[The rover] has been able to fly a few 100 meters and get some great imagery. That’s helped inform the science team about where they want to go next.”

Ingenuity is helping the rover navigate to an area of interest to scientists: a river delta thought to hold lots of geological history. But even before getting there, Perseverance is collecting valuable science data.

The first science paper that came out of the mission, once we’ve landed, was confirming that the delta structure that we went to explore in this crater is actually formed by aqueous processes formed by water,” says Amy Williams, an astrobiologist at the University of Florida and science investigator on the mission.

The findings show that the hard lava rock that makes up the crater floor experienced flowing water. “Finding environments where we know water flowed is one of the big boxes we can check off to say, this is a really great location for us to perform this investigation,” Williams said.

Collecting these samples and bringing them back will be considered a historic accomplishment for NASA and help scientists answer the question: Was there life on Mars?

“I really want to get those rocks back on the ground and apply our whole suite of cutting edge technologies that we have on Earth to answering that question,” Williams said.