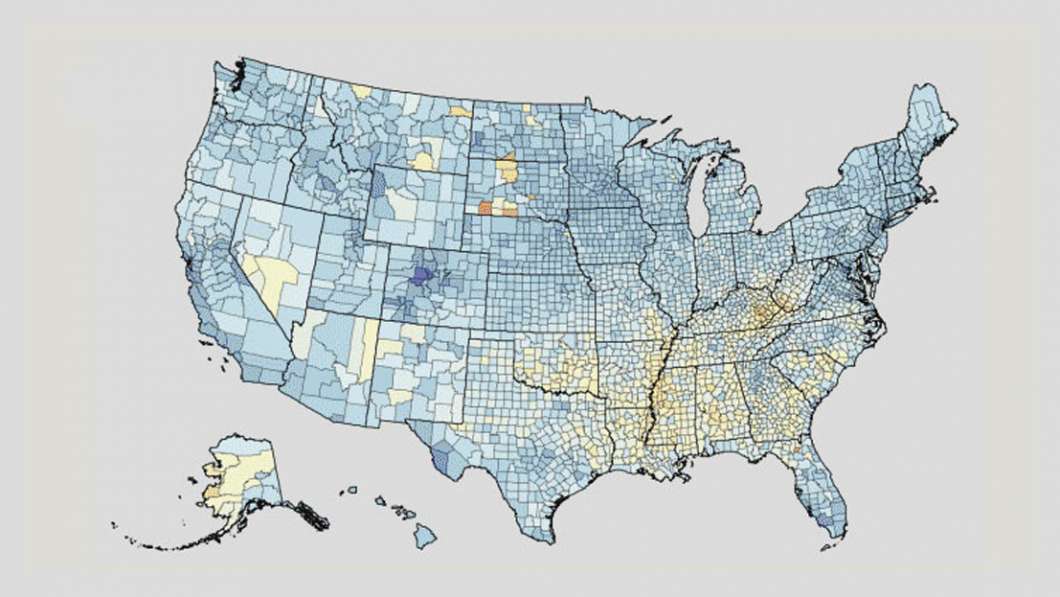 New research documents significant disparities in the lifespans of Americans depending on where they live. And those gaps appear to be widening, according to the research.

“It’s dramatic,” says Christopher Murray, who heads the Institute for Health Metrics and Evaluation at the University of Washington. He helped conduct the analysis, published Tuesday in JAMA Internal Medicine.

Health experts have long known that Americans living in different parts of the country tend to have different lifespans. But Murray’s team decided to take a closer look, analyzing records from every U.S. county between 1980 and 2014.

“What we found is that the gap is enormous,” Murray says. In 2014, there was a spread of 20.1 years between the counties with the longest and shortest typical lifespans based on life expectancy at birth.

In counties with the longest lifespans, people tended to live about 87 years, while people in places with the shortest lifespans typically made it to only about 67, the researchers found.

The discrepancy is equivalent to the difference between the low-income parts of the developing world and countries with high incomes, Murray notes.

For example, it’s about the same gap as the difference between people living in Japan, which is among countries with the longest lifespans, and India, which has one of the shortest, Murray says.

The U.S. counties with the longest life expectancy are places like Marin County, Calif., and Summit County, Colo. — communities that are well-off and more highly educated.

Counties with the shortest life expectancy tend to have communities that are poorer and less educated. The lowest is in Oglala Lakota County, S.D., which includes the Pine Ridge Native American reservation.

Many of the other counties with the lowest life expectancy are clustered along the Mississippi River Valley in parts of Alabama, West Virginia and Kentucky, according to the analysis.

There’s no sign of the gap closing. In fact, it’s appears to be widening. Between 1980 and 2014, the gap between the highest and lowest lifespans increased by about two years.

“With every passing year, inequality — however you measure it — has been widening over the last 34 years,” Murray says. “And so next year we can reliably expect it’ll be even more than 20.”

“That is probably the most alarming part of the analysis,” he adds.

The reasons for the gap are complicated. But it looks like the counties with the lowest lifespans haven’t made much progress fighting significant health problems such as smoking and obesity.

“It’s this steady process where many parts of the country have been steadily getting better, and then there’s a segment of America where things have not progressed in a generation and a half,” Murray says.

Counties in central Colorado, Alaska and along both coasts experienced much larger increases in life expectancy, according to the researchers, while some southern counties in states stretching from Oklahoma to West Virginia saw little, if any, improvement between 1980 and 2014.

Researcher Ellen Meara, who studies health policy at the Dartmouth Institute, speculates that the findings could be another manifestation of the economic inequality plaguing areas of the country. She was not involved with the study.

“One of the things we’ve seen in this country is that for some groups their possibilities look worse than those of their parents, and that’s after generations of always doing better than the previous generation,” Meara says.

The study comes on the heels of other research that found death rates rising dramatically among middle-aged white Americans, a trend researchers Anne Case and Angus Deaton call “deaths of despair.”