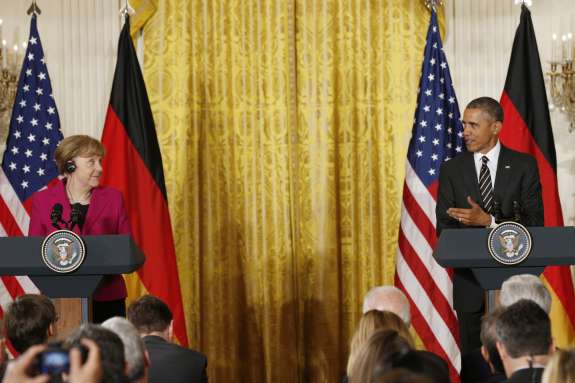 President Obama said “lethal defensive weapons” to Ukraine is one option being considered by the White House if diplomacy with Russia fails to end the fighting that pits Ukrainian troops with pro-Russia separatists.

“If, in fact, diplomacy fails, I’ve asked my team to look at all options, what other means can we put in place to change Mr. [Vladimir] Putin’s calculus,” Obama said in a joint news conference at the White House with German Chancellor Angela Merkel. “And the possibility of lethal defensive weapons is one of those options that’s being examined. But I have not made a decision on that yet.”

Germany and other European countries are against arming Ukraine, preferring to rely solely on diplomacy and other means of pressure.

Today’s comments follow news that the sides will restart talks for peace in Ukraine. As NPR’s Scott Neuman reported Sunday, “If all goes to plan, Merkel will join Russian President Vladimir Putin, Ukrainian President Petro Poroshenko and French President Francois Hollande in the capital of Belarus on Wednesday.”

The conflict in Ukraine, which began last April, has killed more than 5,300 people; the fighting has spiked over the past two weeks.

Russia is under U.S. and EU sanctions for its role in the crisis, but that has not resulted in a let up in the fighting.

Merkel and Obama are discussed the threat posed by the self-described Islamic State, with Obama vowing to “destroy this barbaric organization.”