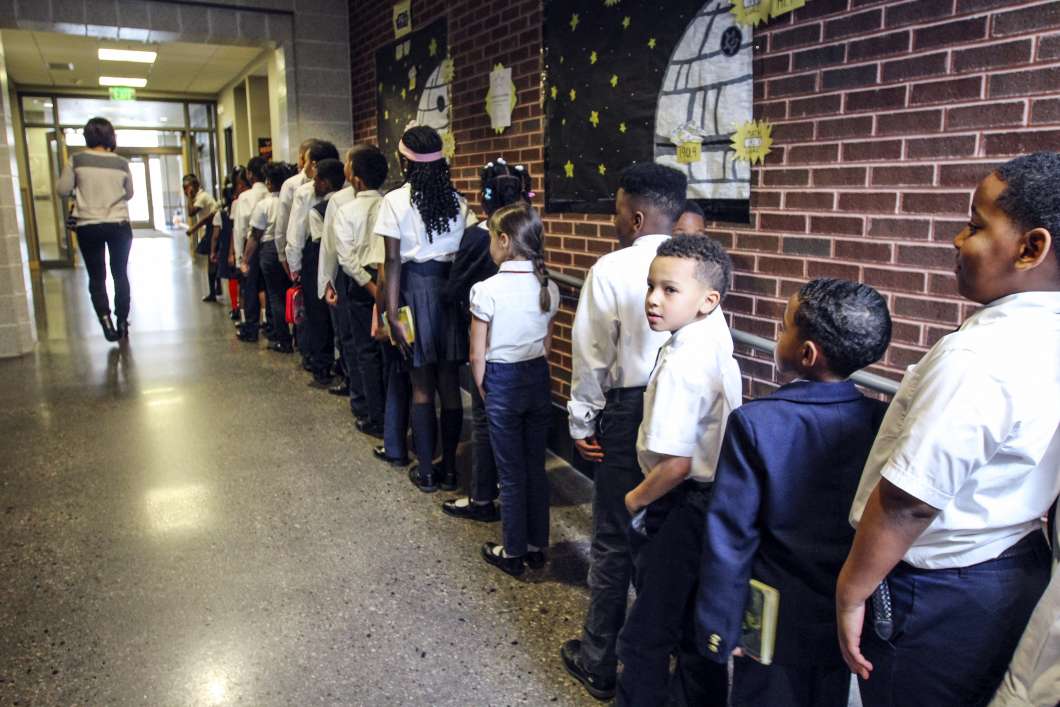 For 27 years it has targeted African-American kids from low-income families, children who otherwise could not afford the tuition at a private or religious school.

The vouchers are issued by what’s known as the Milwaukee Parental Choice Program. Some some see vouchers as a beacon of hope in a public school district where student achievement lags far behind the state average, and where only 20 percent of students are proficient in English language arts and fewer than 15 percent in math.

Others say the program is a failed experiment that has siphoned away money desperately needed by the city’s struggling schools.

As part of our reporting on vouchers around the country, and to get a look at the program as it stands today, we visited several schools in the voucher program.

Texas Bufkin Christian Academy has operated for 16 years. It occupies an old building that once housed a nursing home. The school’s founder, Texas Bufkin, is wary of visitors, especially reporters.

“We don’t let people from the media in our building,” says Bufkin. Why? I ask. “Because I just don’t feel like I need to talk to reporters.” Eventually, I’m allowed inside but, Bufkin says, just for a few minutes.

Of the 121 private and religious schools in Milwaukee’s voucher program, this is the lowest-performing, according to state education officials.

All of the 94 students enrolled from pre-K to 12th grade are African-American, Bufkin says.

All have a voucher worth up to $7,900, depending on the grade they’re in. The school’s latest scores on state tests show that not a single student is at grade level: not in math, not in reading, science or social studies, according to state education officials.

Texas Bufkin’s daughter, Nicole Bufkin, who helps run the school, says there’s a reason for the students’ poor performance: Most of the children that the school takes in arrive four to six years behind.

Howard Fuller helped write the voucher law back in 1990. He agrees that some voucher schools are doing no better than the city’s public schools.

He should know. Fuller is a former superintendent of Milwaukee’s school district. But he insists that for most of the 28,000 students in the program, vouchers are a lifeline.

“There are thousands of children whose lives are much better today because they were able to access better schools than they would have had if the voucher program had not existed,” says Fuller.

His support for vouchers is pretty straightforward.

“I don’t believe that we should have an America where only those of us with money have the ability to choose.”

While vouchers in Milwaukee have definitely given poor families more choices, have they given children a better education?

Critics and supporters can both find, in the thick stacks of research on the program over the years, support for their arguments. That debate has long been muddied by ideologicial, and methodological, differences.

Over the years much of the research found test scores flat, lower in some cases or slightly improved in others. Some more recent studies have shown students in the program making modest gains compared with children in the city’s public schools, especially in terms of college attendance and high school graduation.

But it has not over the years produced the large benefits in achievement that some had predicted. There’s been no miracle here, says Wendell Harris, a member of the Milwaukee school board. He says one group that has benefited from vouchers are private and religious schools.

“If you set up a Christian academy and your main interest is to get a few hundred children to improve your [school finances],” he argues, “and you use Christianity as the draw, these schools have exploited persons’ beliefs for their own private gain.”

The rates of joblessness, crime and poverty in Milwaukee are among the highest in the nation. Vouchers don’t address any of that, says Harris.

Howard Fuller and other voucher proponents agree that the program needs to weed out the lowest-performing schools and build support for the best ones.

Schools like St. Marcus Lutheran School, just north of downtown Milwaukee. Almost all the students at St. Marcus are African-American. Nine out of 10 are low-income, so they qualify for a voucher that helps cover the $8,500 tuition.

The school doesn’t offer transportation, so Henry Tyson, the man who runs St. Marcus, is known to shuttle kids to and from school whenever their parents can’t. This morning, he’s on his way to pick up a little boy named Jeremiah. Tyson says Jeremiah is a talented child who lives in a rough neighborhood where kids often get lost.

“It’s one of the great tragedies in a city like this,” says Tyson. “How do you give kids a vision for their future especially when they’re growing up in these tough, tough neighborhoods.”

Margaret Katherine has a grandson at St. Marcus. The voucher that he uses was an opportunity she says she couldn’t pass up.

“You better grab it while you can,” she says, “because once it’s gone, you’re gonna be like me.”

Katherine says not a day goes by that she doesn’t regret dropping out of school, not learning how to read or write properly. “I don’t want my child to be lost.”

For her, all this back and forth about vouchers is not about pitting private schools against Milwaukee Public Schools.