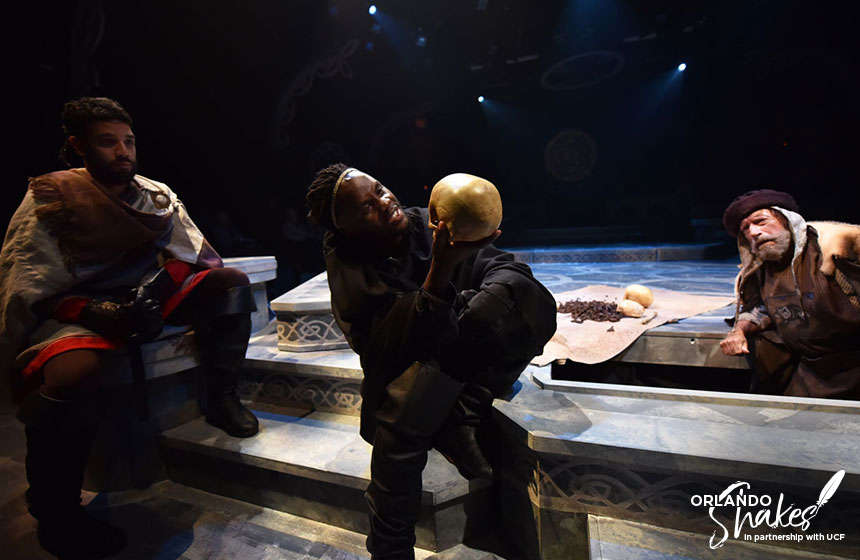 On a recent Saturday night at the Orlando Shakespeare Theater, actors Junior Nyong’o and Greg Thornton verbally spar over an open grave as Hamlet and the Gravedigger, respectively, in Orlando Shakes’ production of Hamlet.

The theater is packed, the audience members laughing and gasping in all the right places. They have no idea that someone from this production was slashed even before the curtain even went up…cut not by a sword, but by a budget.

“Hamlet, which is supposed to have a cast of eighteen to twenty, we did with sixteen,” Orlando Shakes Artistic Director Jim Helsinger said earlier in the week. It’s just one item in his list of cuts the organization had to make because of the drastic drop in its share of state grant money, from $50,000 last year down to $9,000.

“In the Heights, which is supposed to have 24 people in it, we did with 23,” he continued. “So, there are these little slices at the body of our work artistically throughout our entire season.”

That’s not to mention the impact on employee pay and the theater’s reserves for repairs and emergencies, Helsinger said.

Orlando Shakes is one of hundreds of nonprofit arts groups – theaters, museums, science centers and the like – that are grappling with the unprecedented cut in state funding.

“The Division of Cultural Affairs funding has gone from a high of $43 million four years ago to a low of $2.6 [million],” she says. “So it’s a huge decline in a very short period of time.”

Arts organizations don’t rely solely on the state to keep the lights on, but as Garcia explains, state funding is flexible in a way many grants are not. Each individual group can decide how to use it.

For large organizations like Orlando Shakes, it can support paychecks or an operating budget.

For smaller groups, Garcia says the cuts often affect outreach projects that can’t fund themselves with ticket sales, like school programs in underserved and rural communities. “So, those are programs that go into areas where in many cases they would have no arts at all.”

Garcia and others are pressing state lawmakers not only to reverse the cuts, but to put a higher level of arts money in next year’s budget.

Several of Central Florida’s state lawmakers are on board. Democratic Representative Anna Eskamani held a town hall in January and she’s working with United Arts and the Florida Cultural Alliance advocacy group to push for an increase.

Advocates want a funding level of $61 million in 2019’s budget, Eskamani says, “to fully fund the about 664 non-profits who qualified and are well-vetted and ready to make magic with these resources, which would leverage over a billion dollars in economic return.”

And that billion-dollar figure may be conservative. A 2018 study by the Department of State found Florida’s creative industries responsible for $4.7 billion in total economic activity.

Arts funding is earning some applause from both sides of the aisle. Central Florida Republican Senator David Simmons says he’d like to see an increase, and he’s not alone in his chamber.

“If we have the funds, I know that there are senators who believe very strongly that we have an opportunity to increase funding for the arts,” Simmons says.

And as the Orlando Shakes production of Hamlet ends to a standing ovation, arts leaders across the state are hoping their proposal to reinstate arts funding to $61 million will earn a similar reception in the state House and Senate.