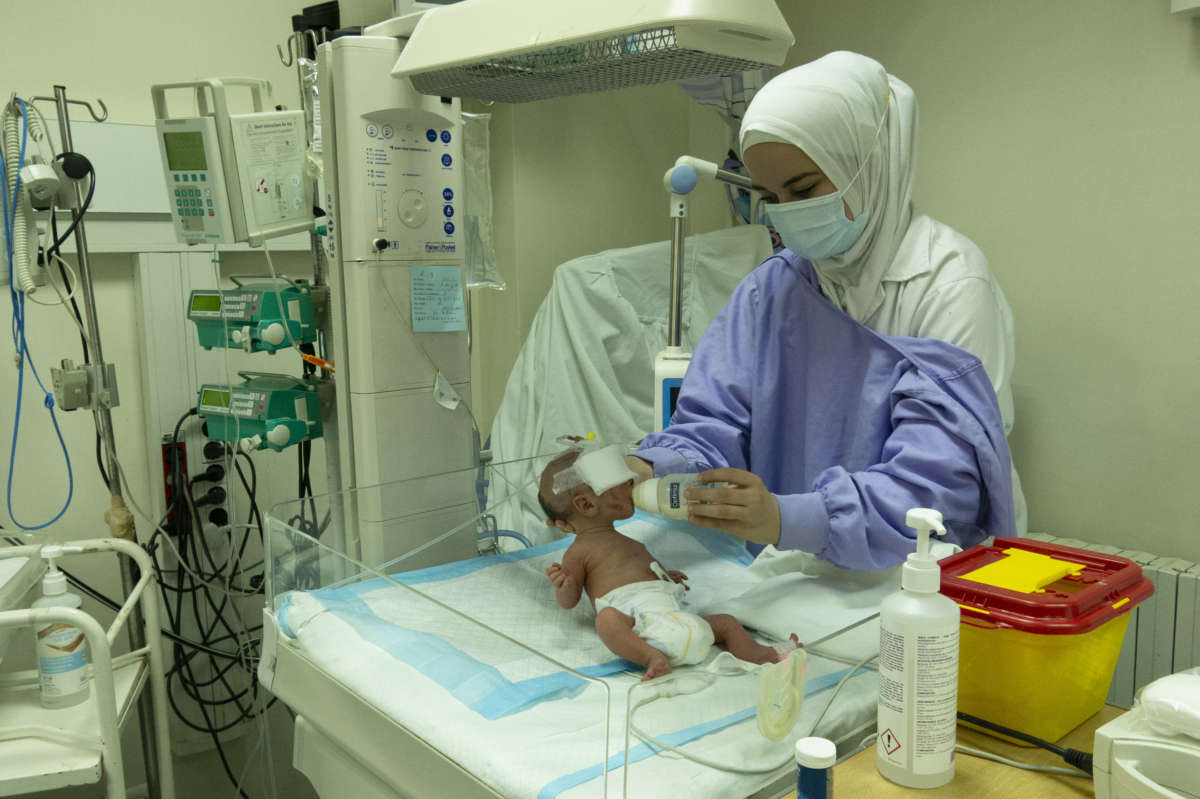 A baby receives care in the neonatal intensive care unit of the government hospital in Tripoli, Lebanon. Because of the lack of prenatal care amid the country's massive economic crisis, medical staff members say more newborns are born sick and weak. From time to time, when parents don't have the funds to pay for additional care, they go home — and leave their infant stranded at the hospital.

TRIPOLI and BEIRUT, Lebanon — Katya El Rahi is relieved her pregnancy is over.

“I had a herniated disk, and the medication I needed was hard to find,” says the 27-year-old homemaker, who just delivered her baby and is recovering in the maternity ward of Tripoli’s government hospital. “And when I did find it, it was super-expensive.”

Lying alongside her newborn, Suleiman, El Rahi says she and her husband won’t be having more kids anytime soon — not until her country’s economy stabilizes.

Lebanon is in the grips of a devastating economic crisis. For years, the government and banking sector mismanaged and squandered the country’s cash reserves until the financial system finally collapsed in 2019. That has triggered severe shortages of everything from food to fuel to medicines and has sent health care costs soaring, making it perilously difficult for people to get treated even for serious illnesses.

The head nurse of the pediatric intensive care unit, Taha Lara, has witnessed the impact of the crisis on some of the hospital’s youngest patients.

“A lot of the babies we see, the mother hasn’t been to a doctor, hasn’t been taken care of throughout her pregnancy or she has the baby at home,” he says. “And the outcomes are worse.”

Because of the lack of prenatal care, he says, he sees more newborns who are sick and weak. From time to time, some are left stranded at the hospital.

“If you had come yesterday, we had two babies — their parents had left them because they didn’t have the money to take them home,” he says. They didn’t have the funds to pay for the additional care needed, so “they just left the babies.”

Baby Suleiman was born into this crisis. His grandmother Diba Aysatado, who gazes adoringly at her grandson, says she has one simple hope for him:

“May he live to see better days than what we’re living through.”

Now, many of the hospital’s shelves, like the one for epinephrine, a treatment for severe allergic reactions, are nearly empty.

The shortages are so bad that she has noticed that some patients have been rationing treatments or skipping them altogether.

“Two days ago, we had a patient who hadn’t been taking his anti-diabetic medicines and he had to have both legs amputated,” says Bitar. “All the complications are coming from shortage of medications or prices have increased so much that patients can’t afford them.”

The shortages and the costs have hit Lebanon’s cancer patients particularly hard.

“You see these people over and over for several months, and then you hear their situation has deteriorated — we stop seeing them, and I guess we’ve lost them,” says Bitar.

Dr. Issam Chehade, the head of the hospital’s oncology department, says there’s no doubt the crisis has cost people their lives.

“This shortage of medication has led to the deterioration of some [cancer] patients, leading to the death of these patients,” he says.

One of the patients currently in Chehade’s care is 65-year-old Mohammad Halabi.

Last year, he started experiencing a strange sensation in his ears and frequent nosebleeds.

A biopsy revealed a rare form of organ cancer, near a cavity by the nose. For the last five months, the retired plumber has been getting treated at the hospital, but it has been a strain on his finances.

“Yesterday, I bought five medications. I paid $32,” he says. “When I started my treatment earlier this year, it cost me $5.”

He says his friends and family have been helping him pay for it.

“Alhamdulillah” — thank God, he says. But it may not be enough.

Lebanon’s economic turmoil has also prompted an exodus of doctors and nurses who are departing the country for more stable work abroad, leaving the country’s hospitals desperately understaffed and patients dangerously underserved.

A dwindling number of doctors and nurses

Dr. Mahmoud Hassoun hasn’t been getting much sleep lately.

The director of Rafik Hariri University Hospital, Lebanon’s largest public hospital, has been scrambling to find doctors to perform urgent surgeries, like a craniotomy on a patient who recently came in with a brain hemorrhage.

His hospital is now down to 15 doctors from the 60-some who worked here a few years ago, and about a third of the nursing staff — 128 of them — have also left since the start of the economic crisis.

“We may be obliged to close one or more departments,” says Hassoun.

It’s a trend playing out in hospitals across Lebanon. Approximately 3,000 nurses have left the country since October 2019, according to the nurses union, the Order of Nurses Lebanon.

He and several other nurses and doctors say they can no longer afford the gas it takes to drive to and from work and are struggling to pay for food and electricity.

“I used to make $1,800 a month in this job, and now that salary is worth $120,” says Kataya, who has taken on a second nursing job to survive. “The first opportunity I will leave. I’ve sent my CV to several countries.”

On a chair in his office is a pile of food — cans of beans, rice, noodles. Higher-paying staff members have been donating food to junior nurses struggling to get by.

Bitar, the chief pharmacist, has also hit her limit.

The thought of leaving weighs heavily on Chehade, the oncology department physician. He says he has been grappling with it a lot lately, but he just can’t bring himself to do it.

“Who will take care of these poor patients?”