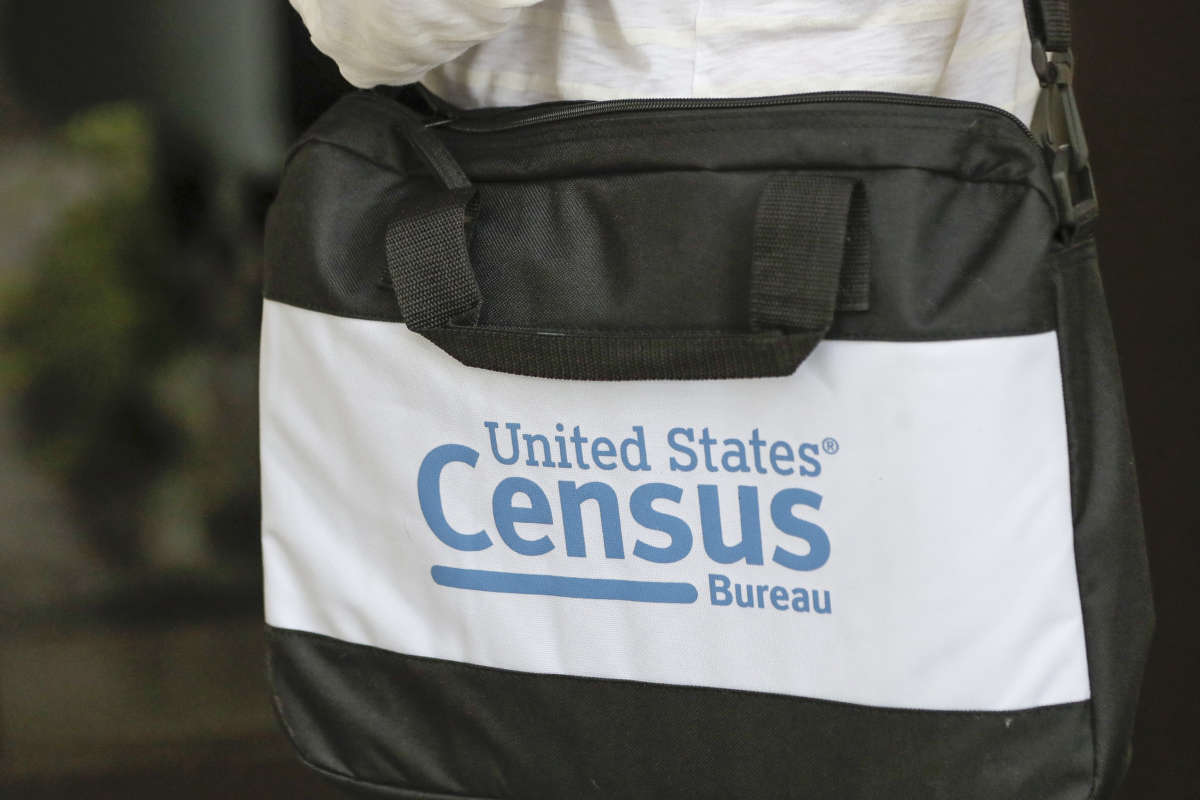 A U.S. Census Bureau worker carries a briefcase while knocking on the door of a home in August in Winter Park, Fla.
Image credit: John Raoux

A Census Bureau analysis has concluded that its curtailed schedule for the 2020 census increases the risk of “serious errors” in the results for the national head count, according to an internal bureau document obtained by the House Oversight and Reform Committee.

The document — a slide deck dated Aug. 3 and marked “Not for Public Distribution” — warns that “serious errors discovered in the data may not be fixed — due to lack of time to research and understand the root cause or to re-run and re-review one or multiple state files.”

The revelation marks the first substantial disclosure of concern from within the bureau about the potential impact of its shortened timetable for completing the national head count.

It comes almost a month after the bureau confirmed that last-minute changes directed by the Trump administration had forced it to speed up its timeline to finish counting and prepare the latest state population totals to be delivered to President Trump by the end of this year as currently required by federal law.

Those changes have not only cut counting efforts a month short but also truncated the time left for the bureau to review and check all of the data it has collected this year for the once-a-decade, constitutionally mandated head count.

Commerce Secretary Wilbur Ross, who oversees the bureau, has emphasized in recent weeks that the bureau is “on its way to delivering a successful count” by incentivizing its door knockers to work more hours in trying to get unresponsive households counted “without sacrificing quality.”

But with about three months to process the count’s results after counting is set to end on Sept. 30, many former Census Bureau officials and other census advocates have been sounding the alarm about the potential threat to the accuracy of numbers used for reapportioning seats in Congress, redrawing political maps and distributing an estimated $1.5 trillion a year in federal funding for public services.

The Census Bureau has declined to comment on the document, the bureau’s chief spokesperson Michael Cook tells NPR.

In a press release on Wednesday, Rep. Carolyn Maloney, a Democrat from New York who chairs the House Oversight and Reform Committee, noted that the bureau’s leaders did not provide the committee with the document, which the congresswoman said was obtained from “another source.”

Under the time pressure, the bureau’s plan has deprioritized the other legally required set of census results — detailed demographic data that state and local officials need for redistricting next year.

“Delivery of redistricting data products will be negatively impacted under this revised plan and we are determining full impacts,” the document warns.

The slide deck also notes that the cancellation of a key part of the bureau’s count review operation that was scheduled to take place this month is likely to lead to “virtually certain vocal objections” from state demographers involved in the program and from state governors. The operation has already helped the Census Bureau gather input from local officials to identify more than 240,000 housing units and 6,500 group living quarters, including nursing homes and prisons, that were missing from the bureau’s records.

A growing number of mostly Democratic lawmakers in Congress have been urging leaders in both the House and Senate to include legislation in the next coronavirus relief package that would extend legal deadlines for reporting census results, which could give the bureau more time to finish the count and process the results.

In a letter to congressional leaders released Wednesday, Maloney cited the slide deck as additional evidence that “makes clear that Congress must act now to fulfill our responsibility under the Constitution to help ensure an accurate and complete count for the 2020 Census.”

“If we do not, our constituents — both Democrats and Republicans — could be directly harmed,” Maloney wrote.