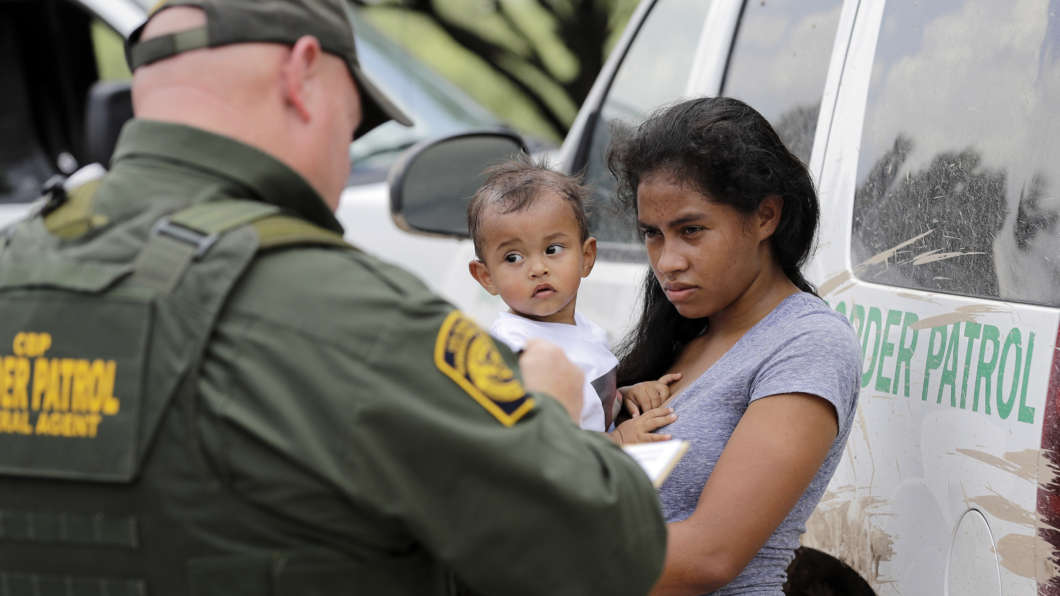 A mother migrating from Honduras holds her 1-year-old child as she surrenders to a U.S. Border Patrol agents after illegally crossing the border, near McAllen, Texas, in late June.
Image credit: David J. Phillip

Migrants detained in recent months at the U.S.-Mexico border describe being held in Customs and Border Protection facilities that are unsanitary and overcrowded, receiving largely inedible food and being forced to drink foul-smelling drinking water.

In a lawsuit filed against Attorney General Jeff Sessions by the Los Angeles-based Center for Human Rights & Constitutional Law, some 200 individuals detained under the Trump administration’s “zero tolerance” policy were interviewed, many of them relating poor conditions.

In the suit, filed Monday in U.S. District Court in California and viewed by NPR late Tuesday, the group is demanding that the government meet minimum standard conditions as laid out in the 1997 Flores Settlement Agreement. The Department of Justice could not immediately be reached for comment.

The filing contains the stories of migrants arriving mainly from Honduras, Guatemala and El Salvador who were detained at various locations at different times, including one facility referred to by several interviewees as the “Dog House” or “Dog Pound,” and another as the “Ice House.” Last names of detained interviewees have been redacted.

Fatima O. of Honduras, presented herself and a young daughter at the border on May 15. She said the facility where they were initially kept, which is not named in the court filing, had no access to showers.

“On the second or third day there, my daughter soiled herself … I asked if I could clean her because her underwear [was] soiled,” Fatima said. “The guards said, ‘No.’ … She remained in her dirty underwear until we arrived at Dilley [Texas] several days later.”

Several of the interviewees complained about the lack of, or poor quality of, drinking water and many others said they were offered sandwiches that were frozen solid, appeared to be spoiled or that they otherwise found inedible.

“[T]he worst thing was the water,” said Delmis V. of Honduras, the mother of a two-year-old boy. “I had to plug my nose to be able to drink it. It came out of the faucet and smelled terrible.”

Mayra S., the mother of children aged 2 and 9 years, said she “begged for water” for her daughter but was refused. “My daughter started crying. The officers told me to shut up.”

Iris A. was one of several who complained about getting “frozen” food that she said “smelled bad” and was “not fit for consumption.” Another said lettuce was “black.”

Others complained about sleeping in cold rooms or of several people being jammed into a small room without enough mattresses.

At the El Centro CBP facility, in one room with three mattresses, “[Eighteen] women are in this room. Three are teenagers/minors,” a 15-year-old identified as Anet M. said. “We have 15 sheets of nylon. We asked for more mattresses but the officers said no. Some of us slept on the benches,” she said, adding that it was “very cold.”

Karen B., who was detained with two children, ages 4 and 5, said “At the [CBP] facility it is very, very cold. Especially when we were wet from the river. There were no clean clothes or towels available.”

Karen said she could not sleep because it was so cold. “[M]y children cry from fear and from the cold. I can only hold one at a time to keep them warm. Whoever I am not holding is cold,” she said.

Blanca M., who is from Guatemala and arrived on May 24 with a 4-year-old girl, said she was not able to shower for several days after she was detained.

“The only bathrooms were the small plastic bathrooms that do not flush,” she said, apparently referring to portable toilets. “The officials told us that there were too many people and we could only shower after we had been there for five days.”

Lidia S., 22, from El Salvador, and her 4-year-old son were apprehended by CBP on June 13 and taken to the South Texas Residential Center in Dilley. “[T]he only food we were given were sandwiches that were frozen and not able to be eaten,” Lidia said.

“My son was crying from hunger,” she said, adding that neither she nor her son were able to eat the food.

The suit on Monday is one of several that the Center has filed against Sessions on behalf of migrants. A hearing in the latest case is set for July 27.