Lawmakers Defy Warnings, Continue To Meet In Capitals Across The Country 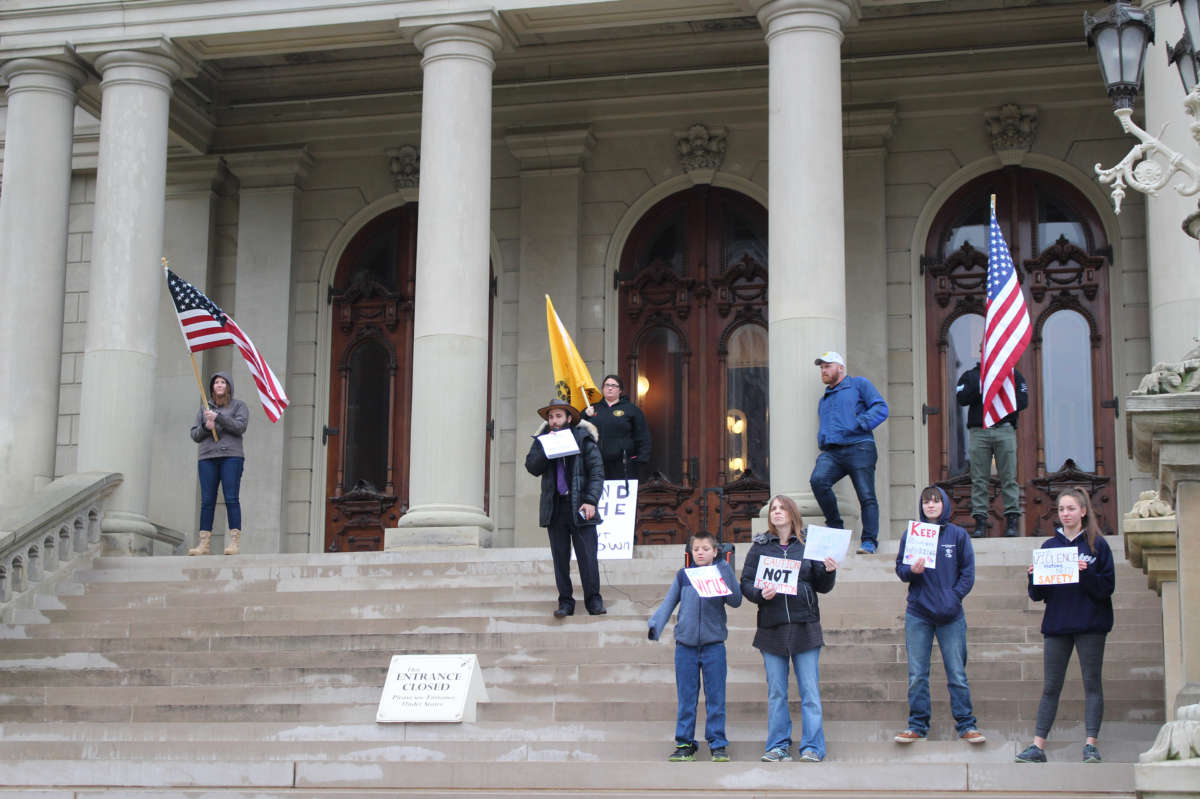 Despite a plea from the governor not to, Michigan's lawmakers met Tuesday at the state's Capitol in Lansing amid the coronavirus pandemic. On the Capitol's steps, demonstrators protested the closure of businesses across the state and the ability to travel freely under the state's stay-at-home order.
Image credit: Abigail Censky

Ben Paviour of VPM, Jeff Tiberii of WUNC, Bente Birkeland of CPR and Ryland Barton of WFPL contributed to this report.

Michigan’s lawmakers returned to the Capitol Tuesday as the state recorded its highest daily number of COVID-19 related deaths in 24 hours. The legislature convened despite the warnings from Democratic Gov. Gretchen Whitmer and public health officials who’ve called for limited gatherings to slow the spread of the coronavirus.

As they entered the Capitol, each lawmaker underwent a health screening and temperature check. Many donned homemade masks while the Lieutenant Governor presided over the Senate wearing an “Everybody vs. COVID-19” shirt.

Black fabric was draped over Democratic Rep. Robinson’s desk in the chamber to mourn the passing of the 44-year-old Detroit representative who died from a presumed COVID-19 infection. His name glowed in white on the electronic roll call. Two other Democratic Representatives from Detroit were also absent from the session after testing positive for the virus.

In an interview Friday, Gov. Whitmer implored lawmakers to proceed with caution. “Rep. Isaac Robinson passed away just a few days ago from suspected COVID-19 — he was 44-years-old,” she said. “And so, bringing in people from all parts of the state to congregate then sending them back to their district, I think, flies in the face of what all the epidemiologists and public health officials are telling us.”

Republicans contended it was absolutely necessary to meet in Lansing in order to extend the Governor’s emergency powers. Democrat’s argued the session was a “political stunt.”

In the end, Republicans — who’ve been unhappy with the rigidity of the governor’s stay-at-home order — prevailed, extending the emergency powers through April 30th, far short of the 70-day extension Whitmer requested.

Senate Democrat Jeremy Moss, who represents heavily affected Oakland County, posted a video message from his car lamenting the fact that lawmakers didn’t extend the emergency declaration further, meaning lawmakers will have to convene again at the end of the month.

“We cannot wait, nor attempt, to achieve a no-risk environment. The only guaranteed outcome of seeking to achieve no risk is no freedoms and no liberties,” said Republican Senate Majority Leader Mike Shirkey in a Youtube video posted shortly after the session.

These debates are happening among state lawmakers across the country. Many state legislative sessions were abruptly cut short because of social distancing and stay-at-home orders. That means unfinished business, as necessary as passing state budgets, has been left on the table.

In New York, where a handful of lawmakers have tested positive for COVID-19, the legislature met despite lawmakers’ anxiety about the virus. They did manage to pass a budget but without many pre-coronavirus priorities. In California, meanwhile, legislative leaders have extended their emergency recess to abide by Gov. Gavin Newsom’s lockdown measures.

In Virginia, Democrats barely had time to celebrate their rise in power before the outbreak struck. The legislative priorities that seemed just within reach for the new Democratic majority a month ago, such as raising the minimum wage, may never see the light of day.

Business groups, as well as Virginia’s cities and counties, are urging Democratic Gov. Ralph Northam to delay the minimum wage increase; Northam hasn’t ruled it out. And the governor will likely have to take a machete to the two-year state budget; pay raises for teachers and state employees are likely on the chopping block.

As for meeting, lawmakers plan to do that again in two weeks — the same day one popular projection predicts COVID-19 deaths will peak in the state.

Virginia Speaker of the House Eileen Filler-Corn says house members plan to hold the session outdoors, possibly on the grounds of the Capitol. The state senate, meanwhile, is set to meet at a separate location, an airy pavilion at the Science Museum of Virginia.

“They have a great sound system, table desks and seating, internet infrastructure AND 250 parking places!” wrote senate clerk Susan Schaar in an email to senators.

Colorado’s legislature is tentatively planning to come back to work next month, even if the state is still under the governor’s stay-at-home order.

Democratic House leaders say everything from meeting remotely, to outfitting lawmakers with personal protective equipment to allow them to work inside the building, are possibilities. Some lawmakers say the governor’s executive orders cannot prevent them from gathering.

“We’re a separate branch of government, so we can decide for ourselves what we need to do,” said KC Becker, Democratic Speaker of the House. “The reality is there’s just certain work that we’re going to have to get to.”

Lawmakers in Colorado still need to pass a budget but others are wary of returning to the state Capitol too soon. Democratic state Sen. Jeff Bridges says some members of the house are sending mixed messages to Coloradans about the importance of staying at home, “Those mixed messages are dangerous to our constituents and especially to the immunocompromised members of my family. I really wish they would pause, look at the science, and truly commit,” he said.

A couple of weeks ago, lawmakers in North Carolina began meeting telephonically to consider things like how to provide tax relief and get money to all the people who are suddenly out of work.

“For the first time in the history of the state of North Carolina, the Legislative Branch of government is meeting, instead of in this building, remotely from around the state. And I think it’s a sobering thought for a lot of us for where we are right now,” said House Speaker Tim Moore, a Republican.

The full legislature is scheduled to convene for session April 28, but the plans for how to do that are still unclear. Staff and attorneys have been exploring whether they can meet at a location outside the Capitol building, but some lawmakers have indicated that the constitution requires they meet in person.

One Kentucky state senator, Robin Webb, a Democrat from eastern Kentucky, criticized legislative leaders for continuing to meet in Frankfort long after knowing about the coronavirus pandemic. In late March, lawmakers were still meeting to hear or vote on controversial bills from voter ID, to abortion.

“We continued on to get where we are to today, where we could have easily been done a couple weeks ago,” Webb said.

But while meeting to pass a one-year budget, most members of the state’s House of Representatives voted from their offices or cars after adopting rules allowing them to submit votes electronically.