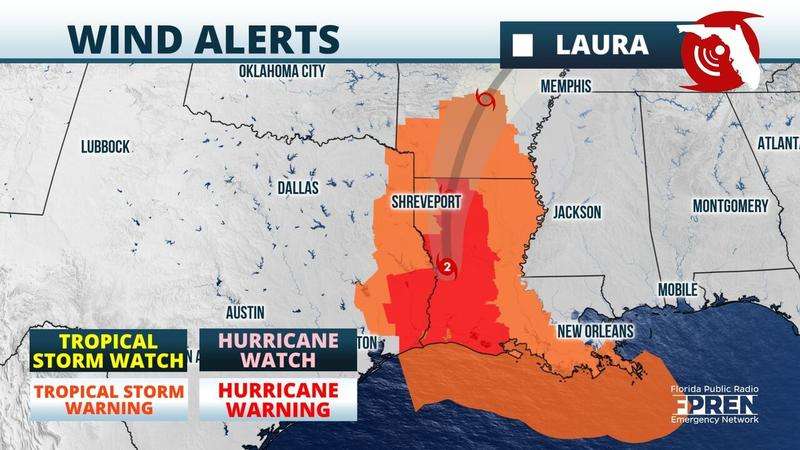 Laura made landfall at 1 AM CT (2 AM ET) near Cameron in southwestern Louisiana, a town about 30 miles from Lake Charles, LA; 105 miles from Galveston; and 190 miles west of New Orleans. Based on preliminary data, Laura’s 150 mph maximum sustained winds at the time of landfall made it the strongest hurricane in the historical record to directly strike the state of Louisiana. Its central pressure of 938 millibars made it the 4th-strongest on record in the state. Records in the North Atlantic date back to 1851. It is important to note changes to the landfall intensity are possible after a thorough storm survey is conducted at a later date.

As of mid Thursday morning, Laura was moving inland through western Louisiana and was expected to pass east of Shreveport Thursday afternoon as a hurricane. It is forecast to be at tropical storm strength as far away as Little Rock, Arkansas late Thursday night, where tropical storm warnings are in effect. Widespread flash flooding is ongoing in much of northern and western Louisiana and these flooding rains are expected to spread into Arkansas, Tennessee, Kentucky, and southern Illinois on Friday according to the latest National Weather Service forecasts.

Tornadoes are becoming an increasing concern over the Southern United States. Two were observed on Wednesday afternoon in southern Louisiana based on preliminary reports from NOAA’s Storm Prediction Center. Forecasters there said additional tornadoes are possible Thursday afternoon and evening in Arkansas, Mississippi, and southwest Tennessee. The tornado chances spread into the Tennessee River Valley and lower Ohio River Valleys on Friday.

As the remnant of Laura moves eastward ahead of a cold front from the midwest, the risk of damaging wind gusts and isolated tornadoes are forecast to spread eastward into South Carolina, North Carolina, Virginia, and the Mid Atlantic states on Saturday. Strong wind shear associated with Laura’s remnant and typical summer heat and humidity may lead to environment that favors longer-lived thunderstorms than what are typically observed in late summer. The details of the forecast are likely to change and residents are encouraged to monitor the latest forecasts Friday and Saturday for updates.