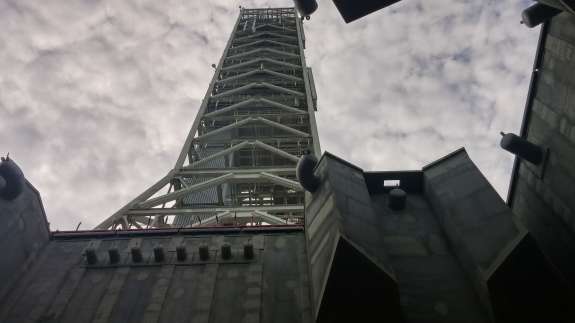 A launch pad that could one day help blast astronauts off to Mars is nearing completion. It’s not new, instead NASA is recycling an older structure.

Their job is to move an SLS rocket from Kennedy Space Center’s Vehicle Assemble Building to the launch complex. Then, the structure needs to stand up to the force of a lift off.

Engineers modified a launch structure that was once used for the Ares I rockets.  Project manager Eric Ernst said that was no easy feat. “It’s amazing. We essential had a giant jenga game. We took this entire structure from the tower forward apart without it falling forward, without it setting, without it falling apart and then rebuilding.”

The SLS rocket that will carry the Orion capsule to deep space weigh around 5-million pounds – twice the weight of the earlier Antares rockets. “I think the first challenge is being able to adapt a structure that was built for a much smaller rocket to handle a much heavier, more robust rocket. That was a huge challenge,” said Ernst.

The final step of construction is installing the so-called umbilicals – the lines that connect the rocket to the tower pre-flight.

Contract for that work was awarded to a Central Florida company.