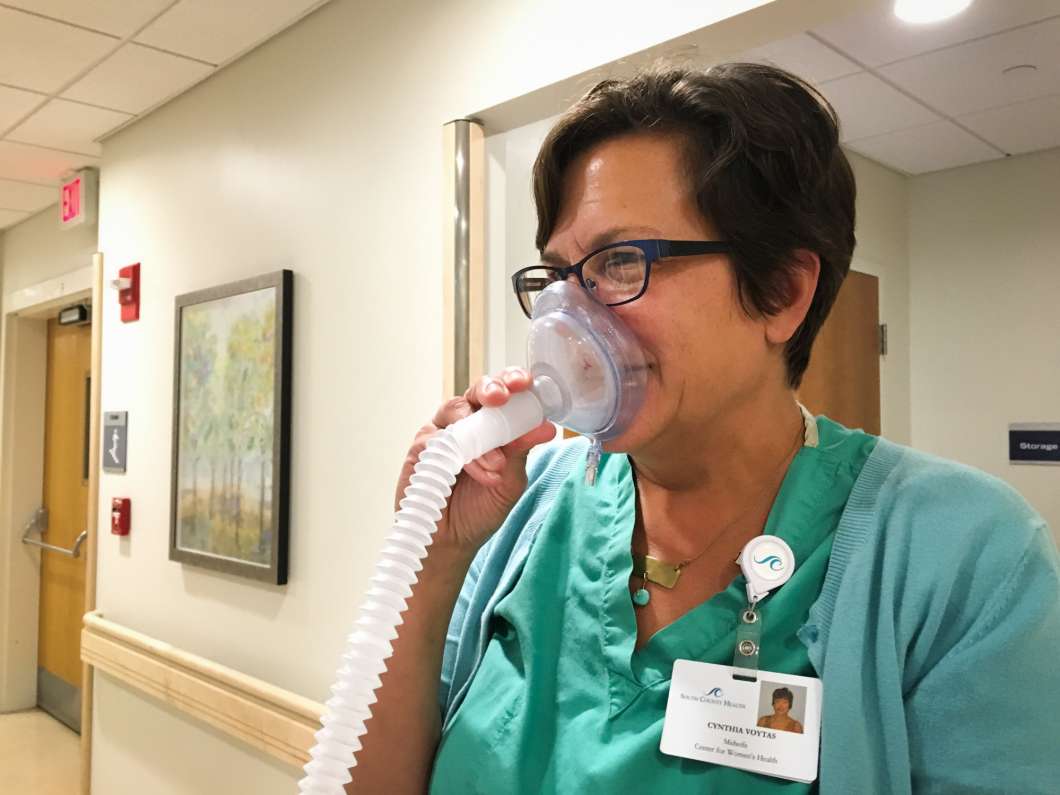 Since the mid-1800s, laughing gas been used for pain relief, but these days it’s usually associated with a visit to the dentist.

In the early 20th century, women used laughing gas to ease the pain of labor, but its use declined in favor of more potent analgesia. Now a small band of midwives is helping to revive its use in the U.S.

One hospital in Rhode Island, South County Hospital in South Kingstown, has just added nitrous oxide, the formal name for laughing gas, to its menu of pain relief options for labor.

Amy Marks jumped at the chance to use it because she wanted to avoid an epidural — an injection in the fluid around the spinal cord that blocks feeling below the waist. Now she sits with her son, Ethan Thomas, barely a day old, snug in the crook of her arm.

“When the contractions started getting pretty intense, I was like, wow, this is pretty bad,” says Marks, who is 31 and lives in Wakefield, R.I. “So they brought it in and it really took the edge off.”

If you’ve been through labor, you know it hurts. Is taking “the edge off” really enough? It was for Marks, once she got the hang of breathing in the gas through a face mask, timing it to anticipate the peak pain of a contraction by 15 to 30 seconds.

“It gives you this euphoria that helps you sort of forget about the pain for a little bit,” Voytas says.

Voytas shows me a little cart stocked with two gas tanks. It’s mobile, so nurses can roll it up to the woman’s bedside. There’s a hose with a breathing mask. When she wants a little gas, a woman can just pick up the mask and breathe. Voytas says it gives a mom more control over her pain relief.

Until 2011, only a couple of hospitals in the United States offered nitrous oxide to women in labor. Today, it’s in hundreds, according to the two main manufacturers of nitrous oxide systems. One of those manufacturers, Porter Instrument, maker of Nitronox, says nearly 300 hospitals and birth centers use the option for pain management.

Michelle Collins, a professor and director of nurse midwifery at Vanderbilt University School of Nursing, is helping lead the charge to bring back nitrous oxide as one of several options women should be offered for pain relief during childbirth. She sees the effort as being in line with what midwives have always done: advocating for women to have more control of the experience of giving birth.

Prior to the 1950s, Collins says, nitrous oxide was commonly used in labor. But then doctors started using more powerful anesthetics. Women would go to the hospital, be completely knocked out, and wake up with a baby in their arms. Epidural anesthesia, which came on the scene in the 1970s, gave women the possibility of a pain-free labor while awake. But it came with trade-offs: epidurals can make it difficult to move around, and can prolong the second stage of labor.

Women want more options, Collins says. They want to be more involved in the birth of their baby. “Now women are more informed, and they’re demanding that their voices be heard, which is a really great thing in my book,” she says.

Nitrous oxide has continued to be used regularly in Europe for labor pain, so there’s data that shows it’s safe, especially in smaller doses. It doesn’t reduce pain, like an epidural. Rather, it induces a sense of euphoria or relaxation.

Another leader of this mini-revolution, retired nurse midwife and epidemiologist Judith Rooks, says the gas leaves the body in seconds.

“It does pass the placenta and go into the fetal circulation, but as soon as the baby takes a breath or two, it’s gone,” Rooks says.

The American College of Nurse Midwives came out with a position paper in 2011, saying it’s important for midwives be aware of nitrous oxide as a good option for women in labor and get trained in how to administer it.

Obstetricians don’t have an official position on use of nitrous oxide, says Dr. Laura Goetzl, a professor at Temple University’s Lewis Katz School of Medicine in Philadelphia and a member of the American College of Obstetricians and Gynecologists. She helped draft the College’s 2002 guidance about analgesia for labor, which, she says, “did not discuss nitrous oxide as an option since its use in the U.S. was exceedingly rare at the time.” She adds, “However, I can speak as an expert on obstetrical analgesia that it is a safe and reasonable option. We are actually currently trying to add a service to our hospital.”

The American Society of Anesthesiologists reviewed research on nitrous oxide in May 2011, and said that there needs to be more studies, and more rigorous studies, on its safety and effectiveness — much of the research is decades old. They also warn that facilities should have a good system for capturing any gas that escapes into the air, so those nearby don’t breathe it in. But they also say its use in Europe shows “good safety outcomes for both mother and child.”

Nitrous oxide is less expensive than an epidural by hundreds, sometimes thousands of dollars. Collins says the disposable patient breathing circuit and mask cost about $25 and the gas alone might cost about 50 cents an hour. Porter Instruments, which manufacturers the Nitronox system, says the equipment itself will cost a hospital or facility just under $5,000. An anesthesiologist does not need to administer it — that can be done by a nurse midwife or other trained medical staff. Though hospitals are having a hard time figuring out the billing because it’s so new, says Collins.

“The interesting thing is that there’s not a charge code for this particular use of nitrous oxide in labor,” she says. “So places around the country are being very creative in how they’re approaching the charge portion of it.”

One insurer in Rhode Island covers it as it would another painkiller. Some hospitals, says Collins, just swipe a patient’s credit card, or don’t charge at all.

This story is part of a reporting partnership with NPR, local member stations and Kaiser Health News.