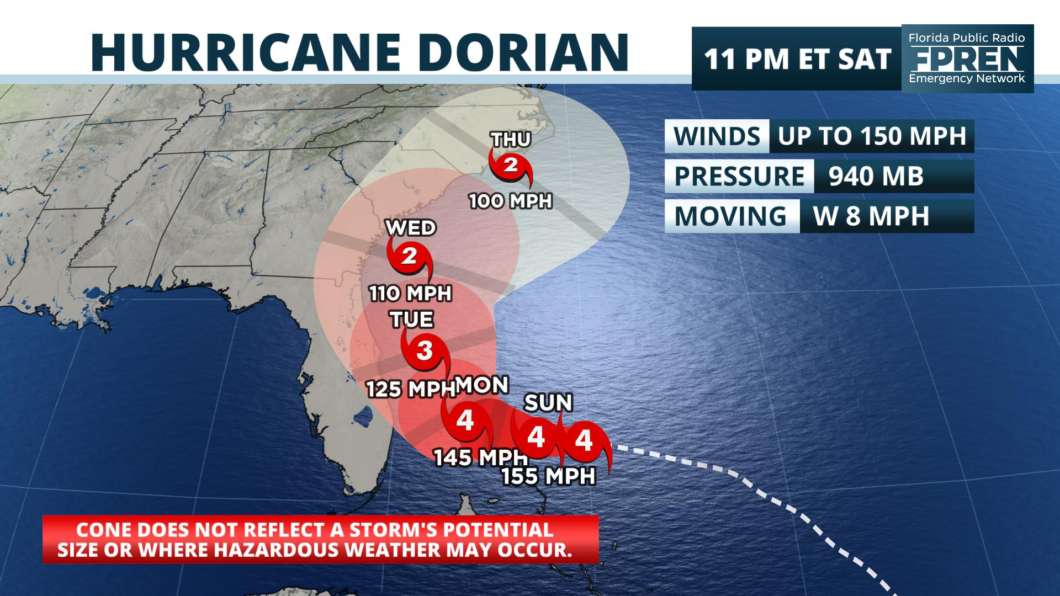 Florida is spared of a direct hit in the latest forecasts Saturday that show Hurricane Dorian on a path toward the Bahamas and then north toward the Carolinas.

The projections take the Category 4 hurricane on somewhat of a boomerang route away from Florida, prompting a sigh of relief for many in the state as leaders are urging continued vigilance for outer bands that threaten heavy rain and wind for coastal areas.

A significant change in the weather pattern that is steering Dorian is likely to keep the worst of the hurricane just offshore the Florida east coast. However, the hurricane is large enough and Dorian may come close enough to spread tropical storm force winds to portions of southeast and east-central Florida.

Tropical storm force winds extend about 105 miles from the center, and National Hurricane Center forecasters say that could expand. For these reasons, the center issued Tropical Storm Watches from Deerfield Beach in Broward county to Sebastien Inlet near the Brevard/Indian River county line. High surf and rip currents are expected this weekend into early next week, regardless of the exact track of Dorian.

“Even if it doesn’t directly strike Florida this is a big powerful storm,” Gov. Ron DeSantis says. “You’re still looking at really significant storm surge on the east coast of Florida. You’re looking at major flooding events in different parts of the state.”

A ridge of high pressure that meteorologists had thought would steer Dorian directly into Florida turned out to be weaker than expected, says Ray Hawthorne of the Florida Public Radio Emergency Network.

“This has opened the door to a northward turn,” he says. “There are still several reliable models that bring the hurricane close to the east coast and residents there should not let their guard down yet.”

He says the east coast may still see direct effects, including strong winds and heavy rain Tuesday and Wednesday depending on how close Dorian gets before turning north. Higher seas and dangerous rip currents are expected along the Atlantic coast this weekend, well before the storm makes its closest approach.

Tropical storm force winds are expected to reach parts of South Florida and the Space Coast on Monday, gradually spreading toward Daytona Beach and the First Coast on Tuesday. Hurricane force winds are becoming less likely and should stay offshore.

Coastal flooding is likely, regardless of how close Dorian gets to the state. The new moon is causing high astronomical tides during the times of high tide. The National Weather Service in Jacksonville has issued Coastal Flood Advisories. Tidal departures may reach 1 to 2 feet above normal this weekend.

The Florida Department of Agriculture says oil tankers in the Atlantic Ocean and Gulf of Mexico are on standby and ready to resupply the state with fuel once it is safe enough after the storm to come to port.

The U.S. Army Corps of Engineers is redirecting resources to Florida from Puerto Rico and the U.S. Virgin Islands.

In Orange County, Mayor Jerry Demings says leaders are “cautiously optimistic” about the new forecast. He says shelters will open Sunday for evacuees from coastal areas.

“The most critical period of time that we are looking at here within Orange County is from about midnight on Monday morning, Sunday night to about 8 a.m. on Tuesday.”

He says more than 150,000 sandbags have been handed out as earlier forecasts showed Central Florida in the crosshairs of what would have been the most significant hurricane to strike Florida’s east coast in some 30 years. Sixty Red Cross tractor-trailers are on the way with supplies. The county also suspended garbage collection Monday and Tuesday.

In Volusia County, leaders are bracing for tropical storm conditions.

“Volusia County can expect right now approximately 40 to 50 mile per hour tropical storm force winds for eight to 12 hours and even potentially longer. We could expect gusts up to 50 miles an hour,” Volusia emergency manager Jim Judge says. “We continue to monitor the system as it moves along the coast and hopefully offshore.”

County leaders say the new forecast prompted them to move back evacuation plans to Monday. Brevard County also pushed back a mandatory evacuation order for some residents. But DeSantis says he isn’t instituting one-way traffic flows or waiving toll fees yet.

“If the traffic becomes abnormal then we will take needed action to alleviate. However at this point we do not see any abnormal traffic on the roadways. So those options are on the table if need be can be exercised.”

Brevard County spokesman Don Walker says the causeways to the barrier islands will not close before or during a storm, but “what the problem is with staying on the barrier island is that if you have an emergency, and we’ve got winds above 60 miles per hour, it’s very unsafe for high-profile vehicles like ambulances or fire trucks to cross the causeways.”

He says the county is working with public transportation should residents with special needs require assistance getting to shelters.

Colleges and public schools are closed through at least Tuesday.

Water managers are bracing for heavy rain associated with the storm.