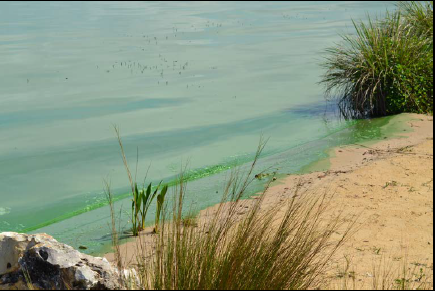 Blue-green algae began to bloom about a month and a half ago on Lake Minneola. Photo courtesy Lake County

Tests show the outbreak of blue-green algae has been toxic, but not enough to close the lake ahead of a triathlon this weekend.

The bloom began about a month and a half ago. Ron Hart of the Lake County Water Authority describes the outbreak of blue-green algae or cyanobacteria as severe.

He says the county is working with a contractor that is sampling the water to identify the source of the nutrient pollution responsible for the bloom.

“It’s a concern because it’s not occuring to anywhere near this extent on any of the other Clermont chain of lakes. You would expect that if it was coming through the chain and passing through you should have these types of issues also going on on Lake Minnehaha, and we don’t.”

In the meantime the county has asked the state Department of Environmental Protection to include the lake in a test of a new treatment aimed at controlling the algae.