Kurds Say They Have Halted ISIS Advance Near Syria-Turkey Border 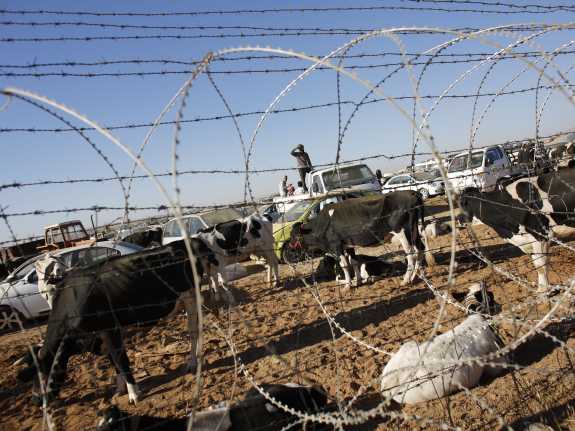 Syrian Kurds with their livestock wait behind a border fence near the southeastern town of Suruc in Sanliurfa province on Monday. Some 100,000 Kurds have fled from Syria into Turkey amid intense fighting between peshmerga forces and ISIS.
Image credit: Murad Sezer

Kurdish fighters claim to have halted an advance by self-described Islamic State militants in an area of the Turkish-Syria border region that has seen masses of refugees fleeing the fighting in recent days.

Reuters quotes a spokesman for the YPG, the main Kurdish peshmerga group in the region, as saying “fierce clashes” were still underway with ISIS, but that the extremist group had been halted in its advance just east of the town of Kobani in northern Syria. The monitoring group Syrian Observatory for Human Rights confirms that the group calling itself the Islamic State, also known as ISIS or ISIL, have not made any substantial gains in the past 24 hours, Reuters says.

NPR’s Deborah Amos reports that Kobani “had been a safe enclave for Syria’s Kurds about 10 miles from the Turkish frontier, but since June, ISIS has been attacking it and stepped up these attacks with tanks and artillery over the past couple of days.”

The intense fighting, she says, is what has caused an “exodus of people” across the border into neighboring Turkey. The estimate of the number of refugees that have crossed over in recent days varies, but Turkey’s Deputy Prime Minister Numan Kurtulmus has put the number at 130,000.

As we reported over the weekend, tens of thousands of Kurdish refugees have fled.

By way of background, The Associated Press says:

“The extremists’ offensive on the Kobani area near the border with Turkey prompted the leader of Iraq’s Kurdish region to urge the international community to intervene to save Syria’s Kurds from the militant onslaught.

“In a statement posted on his website, the president of Iraq’s largely autonomous Kurdish region, Masoud Barzani, said the Islamic State group’s ‘barbaric and terrorist acts’ on the Kobani area in northern Syria ‘threaten the whole entirety of the Kurdish nation and it has targeted the honor, dignity and existence of our people.’ “

Turkish security forces, meanwhile, clashed with refugees, and Turkey has closed some of its border crossings. The BBC says: “Some of the new arrivals are being sheltered in overcrowded schools, as Turkey struggles to cope with the influx.”