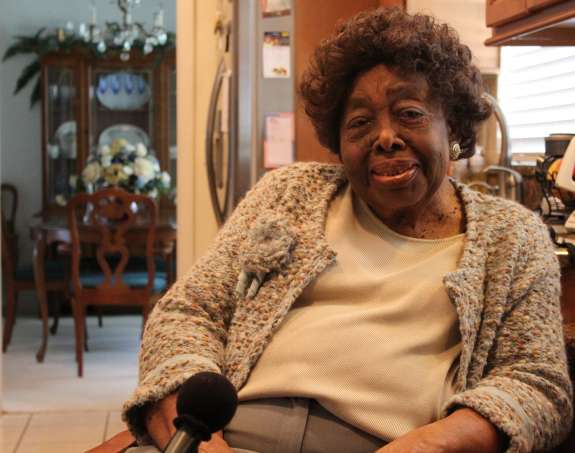 Dr. Charlie Jean Salter is one of the few living activists who was present during Dr. King’s visit to Central Florida. Photo: Renata Sago.

Charlie Jean Salter was at Tinker Field Stadium in Orlando when Dr. King came to speak in 1964–just months after giving his historic “I Have A Dream” speech in Washington. Salter remembers the crowd in the stadium as “sparse” during King’s visit. Tensions were high.

“When he finished speaking, he made this statement and I never will forget it. He said, ‘Orlando is not ready for Civil Rights, and I won’t be back,'” Salter says.

Since then, 86-year-old Salter, who was born and raised in Orlando, has played a role in desegregating schools and the police force. However, she believes real progress will come with the creation of policies that support fair housing, access to jobs, and better education.

“The dream has not been fulfilled, and for us to allow this thing to go unnoticed would be a disgrace,” she insists.

Salter represents a historic era that younger civil rights activists in Central Florida are hoping to draw on today. Hundreds of local leaders are calling for an overhaul of the legal system in the wake of police-involved shootings in Florida and other states.

Natalie Jackson is a civil rights attorney whose clients include the family of Trayvon Martin, the black teenager fatally shot by George Zimmerman in Sanford. She believes recent incidents in Ferguson and New York reflect a breakdown in race relations.

Jackson and local activists are advocating for new policies that will require greater scrutiny of law enforcement officers in Orlando.