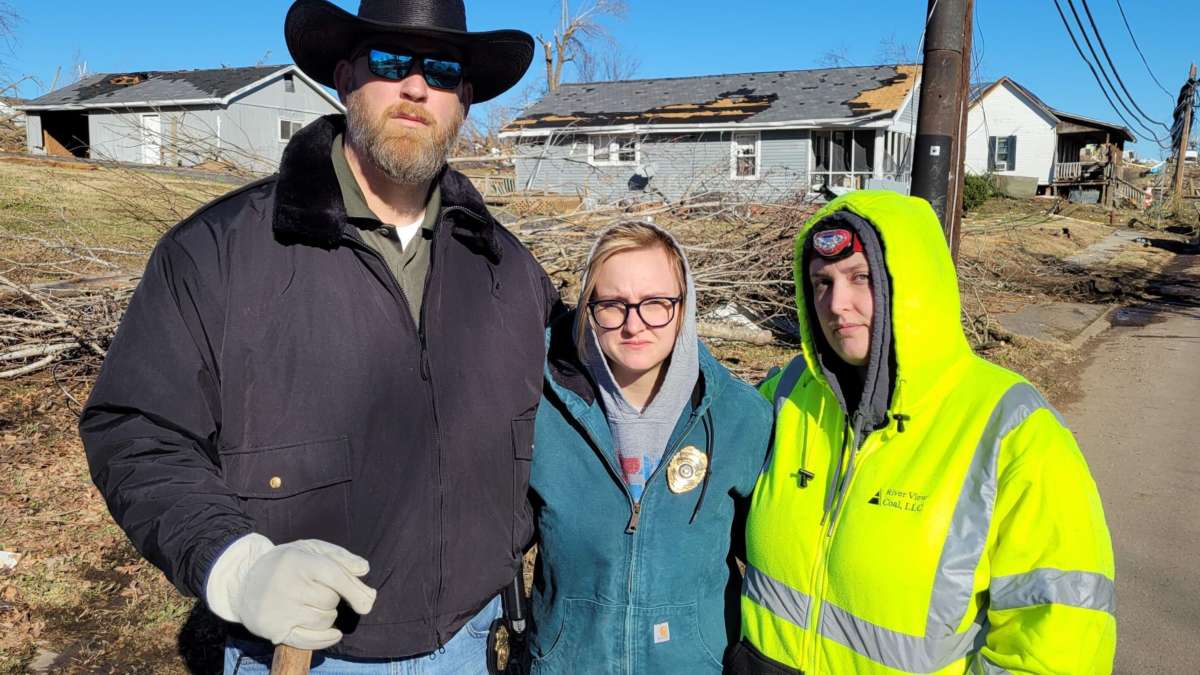 Under a chilly blue sky, a dozen men and women stood in a line on a devastated street in Dawson Springs, Ky., one of the small towns hit hardest by the swarm of tornadoes that raked the nation’s midsection Friday night into Saturday.

Geoffrey Deibler, a police chief from neighboring Morganfield, came to volunteer on one of the search-and-recovery crews fanning out across Kentucky on Monday.

“We’re going through every bit of that,” Deibler said, pointing wearily to a dense snarl of downed trees and debris as he waited for the signal to begin marching. “If there’s pieces of roofing or swimming pools or tin, we’re picking that up and moving it.”

The goal is to find survivors — or recover the remains of victims. As of Monday night, the official death toll in this community of 2,600 people stood at 12.

A four-wheeler rumbled past and gave the signal. The searchers set off, moving carefully through what used to be a cluster of small homes. They used sticks and heavy leather gloves to shift the rubble.

“We hope somebody connects to them and they’re out there and we just don’t know where they are yet. Maybe they don’t have cell service,” the governor said.

Meanwhile, teams like this one, crewed by volunteers and National Guard troops, are going house to house and also searching fields and woodlands.

“It’s something else, ain’t it?” said Jason Cox, leader of this search team, shaking his head at the scale of destruction.

Cox, a deputy fire chief from the nearby town of Sturgis, marched along in heavy firefighter’s gear, working to keep his team evenly spaced. He said this kind of recovery work takes a heavy emotional toll.

“It’s extremely hard,” he said. “We’re all adequately trained … so we just do the best we can with what we’ve got.”

Members of this crew haven’t found anyone alive so far, but they did recover one body during a previous day’s search.

“We found a gentleman,” said Deibler, who tipped back his cowboy hat and said quietly, “It’s difficult.”

As the team moved up a low hill, another searcher knelt to shine her headlamp into the darkness of a collapsed garage.

“I was a nurse for several years,” said Bobbie Brown, who works now as a police dispatcher in Morganfield. “Unfortunately, I’ve learned to shut my brain off when it comes to these types of situations.”

But many of these rescue workers here acknowledge being uniquely vulnerable to the pain and loss of this disaster.

“We have family here, as well,” said Ryan Linton, a member of the Dawson Springs Volunteer Fire Department. “So everybody’s trying to make do with what’s going on.

“Unfortunately, it’s like a movie that just won’t stop playing.”