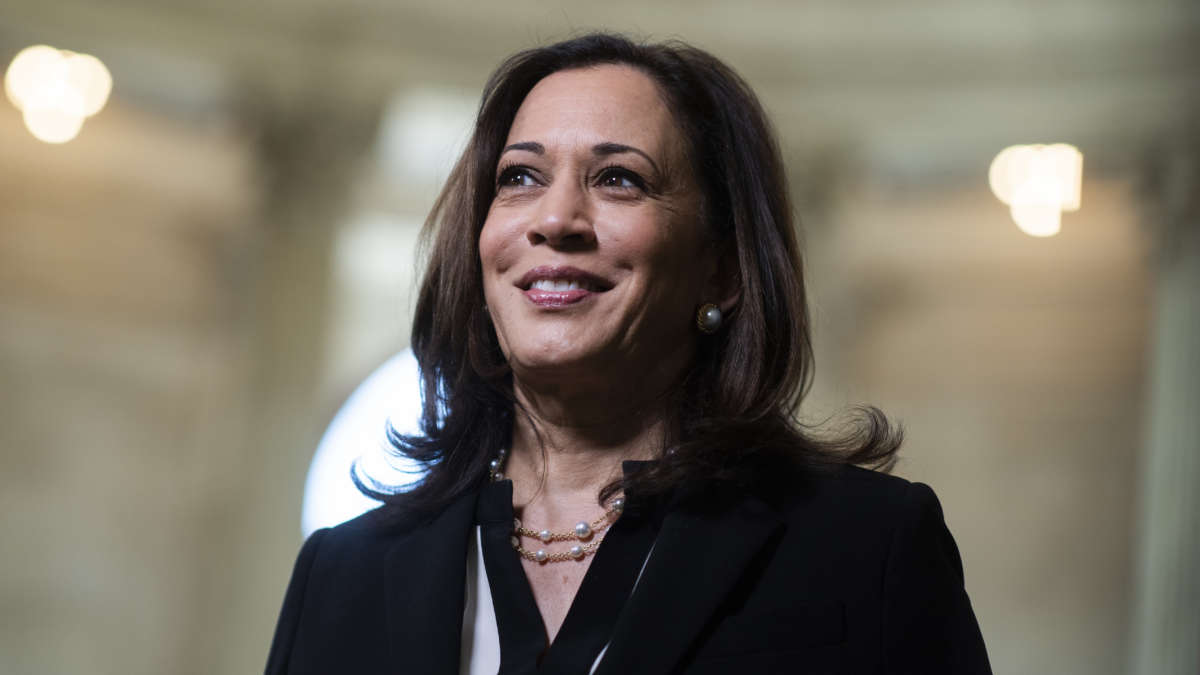 Sen. Kamala Harris is Democratic presidential hopeful Joe Biden's pick as his running mate — a choice that many are celebrating in India, where Harris' mother was from.
Image credit: Tom Williams

Many Indians are tweeting support Wednesday for Kamala Harris, celebrating their connection to the new presumptive Democratic nominee for vice president, whose mother was from India.

Harris is not only the first woman of color to appear on a major U.S. presidential ticket, but she is also the first person of South Asian descent.

“This is a historical, transformational, and proud moment for… all women of colour, all Black women, and all South Asian women,” Bollywood actress Priyanka Chopra tweeted. “Pride for India!!” says another.

Harris’ mother, Shyamala Gopalan, who died in 2009, was a Hindu whose family hails from Tamil Nadu, a state in southern India. Gopalan moved to California for graduate school before Harris was born.

“It is a moment of pride for Indians and Tamil Nadu especially,” tweeted the state’s deputy chief minister, Thiru O. Panneerselvam.

It is a moment of pride for Indians and TamilNadu especially, as Kamala Harris, the first Indian senator, whose mother hails from TamilNadu has been nominated as the Vice Presidential candidate by the US Democratic party. My hearty wishes to her. #KamalaHarris pic.twitter.com/6le16uS0oV

While Harris has most often identified herself as Black, and on occasion, as African American, she wrote about her Indian mother’s influence on her in her 2019 memoir, The Truths We Hold. Harris has previously spoken about her family’s Indian heritage, including in a giggly cooking video with actor Mindy Kaling. Harris has said she has fond memories of strolling Tamil Nadu’s beaches with her late grandfather.

But some supporters of India’s Hindu nationalist government also took to social media Wednesday to criticize Harris for her stance on Kashmir, India’s only Muslim-majority region.

“This is one of the reasons I don’t support #KamalaHarris. She’s the favorite candidate of those who want to break my ancestral homeland of #Kashmir away from India,” one tweet read.

This is one of the reasons I don’t support #KamalaHarris. She’s the favorite candidate of those who want to break my ancestral homeland of #Kashmir away from India. Kashmir is the seat of Hindu spirituality. I can’t support any candidate who goes to bat for Kashmiri terrorists. https://t.co/bUEu9S3VY4

Last year, the Indian government canceled the special autonomy of what was then the state of Jammu and Kashmir and put the region under direct central government control. Afterward, Rep. Pramila Jayapal — a Democrat and Indian American congresswoman — introduced a U.S. House resolution urging India to uphold human rights and refrain from the use of violence in Kashmir. Harris then tweeted her support for Jayapal when India’s foreign minister abruptly canceled a meeting with U.S. lawmakers because Jayapal was included.

In September 2019, as a presidential candidate in the Democratic primaries, Harris also responded to a question from a Kashmiri American at a campaign event by saying: “[Kashmiris] are not alone. We are all watching. So often, when we see human rights abuses… the abuser will convince those that they abuse that nobody cares, and that nobody’s watching, and that nobody is paying attention — which is a tool of an abuser.”

Still, the national general secretary of India’s ruling Hindu nationalist party on Wednesday tweeted his congratulations to Harris for her nomination.

First Indian and Asian woman to get the nomination as official VP candidate. 👍 https://t.co/zrGa612Rio