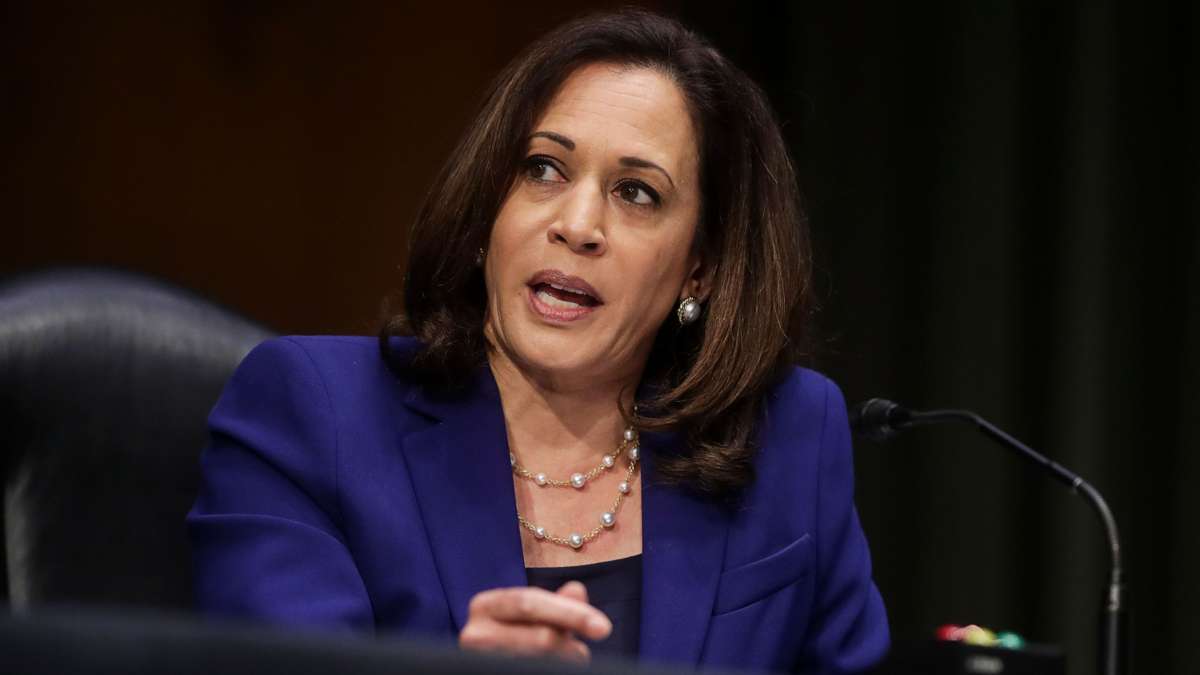 Speculation about running mates can be wrong, of course. Ultimately, the choice is Biden’s and Biden’s alone — just as it was Barack Obama’s call to tap Biden in 2008.

But Harris is often the first name mentioned by Democrats inside and on the edge of the Biden campaign’s orbit. She topped a recent national poll asking respondents for their preferred Biden running mate. And, for what it’s worth, she’s the runaway favorite on online betting sites.

That’s all despite the fact that Harris’s own presidential campaign was a disappointment, having never even made it to the Iowa caucuses.

Still, Harris allies see the first-term California senator and former state attorney general and San Francisco district attorney as bringing needed demographic balance to Biden’s ticket. They also see her prosecutorial resume as the ideal professional background in a political climate intensely focused on racial justice and policing, and her reputation as a sharp attack dog in Senate hearings as a key asset for a running mate.

Perhaps most importantly for Harris’s chances, though, many Democrats believe she has more political and governing credibility than any other potential picks, save perhaps Massachusetts Sen. Elizabeth Warren.

“She knows the system from inside, and she knows we have to have this whole cultural shift in policing in this country,” said California Rep. Barbara Lee, who endorsed Harris’s presidential campaign. “She’s very well-qualified, because of her background, to understand how we have to dismantle many of those systems.”

Biden is facing increased pressure from other Democrats to select a woman of color.

“There is a cry, there’s a clarion call, for us to do something different, for this country to literally face structural racism. … We feel like a Black woman could actually bring that to the ticket,” LaTosha Brown, the co-founder of Black Voters Matter Fund and a political strategist, recently told NPR.

Minnesota Sen. Amy Klobuchar joined the push last week, when she took herself out of contention for the job and urged Biden to pick a woman of color as a running mate.

“If you want to heal this nation right now — my party, yes, but our nation — this is sure a hell of a way to do it. And that’s just what I think after being through this in my state,” Klobuchar, another former presidential candidate herself, told MSNBC on Thursday.

“I’d be honored, if asked, and I’m honored to be a part of the conversation,” Harris told late-night host Stephen Colbert on CBS last week. “Honestly, let me just tell you something: I will do everything in my power, wherever I am, to help Joe Biden win.”

“Joe Biden would be a great running mate”

Even before the coronavirus crisis and the outcry over systemic racism and police violence upped the pressure on Biden to pick a Black running mate, Harris was seen as a natural, maybe inevitable, running mate if Biden won the Democratic nomination.

Harris, a 55-year-old Black woman, would complement the demographic weaknesses of a 77-year-old white man trying to lead a party increasingly focused on, and energized by, younger voters and voters of color. And Biden and Harris have seemed comfortable with each other: In 2018 and 2019, the two posed for pictures together on social media after chance encounters on the street and on Amtrak trains. Harris has a close relationship with many people in the Obama administration orbit, and had worked alongside Biden’s late son, Beau, when both served as state attorneys general.

Campaign chatter about Harris as a veep-in-waiting percolated to the point that more than a year ago, she felt the need to deflate it with a sarcastic comment to reporters.

“If people want to speculate about running mates, I encourage that,” she said at a May 2019 press conference, months after the launch of her own campaign. “Because I think that Joe Biden would be a great running mate. As vice president, he’s proven that he knows how to do the job. And there are certainly a lot of other candidates that would make, for me, a very viable and interesting vice president.”

“That little girl was me”

The chatter suddenly came to a halt the first debate of the Democratic primary.

Just before it, Biden had caught heat from progressives for talking nostalgically about his working relationship with two noted segregationist senators.

“It was hurtful to hear you talk about the reputations of two United States senators who built their reputations and career on the segregation of race in this country,” Harris told Biden during the debate. “And it was not only that,” she continued, “but you also worked with them to oppose busing. There was a little girl in California who was part of the second class to integrate her public schools. And she was bused to school every day. And that little girl was me.”

The attack on Biden, who was then the front-runner, had clearly been planned and practiced. Shortly after the debate ended, Harris’s campaign began selling T-shirts emblazoned with its most quotable line: “That Little Girl Was Me.”

“It was a debate!” Harris said just last week, laughing, when Colbert noted on his show that Biden’s “teeth were like Chiclets all over the stage” after the attack, and asked her how she and Biden can now get along. “It was a debate! The whole reason — literally, it was a debate. It was called a debate.”

She added: “In all seriousness, I’ve known Joe a long time and I care about him deeply.”

Many Democrats do not view the confrontation as something that would block Harris from getting the vice presidential nod.

“[Biden has] been in politics long enough that nothing is irreparable,” said one Harris ally who asked for anonymity to speak about the issue. “He gets primaries and debates and yelling one day and getting along the next. It’s a Senate training.”

Perhaps more harmful to Harris’s chances as a running mate, though, is the fact that the debate exchange marked the high point of her campaign. Harris briefly surged in the polls after the first debate, and Biden sunk. But soon after, Harris did something that would occur time and time again during her run: She appeared to retreat from the bold position she had previously taken. On busing, she struggled to make it clear how her views were substantially different than Biden’s.

“Kamala is a cop”

During the primary Harris also faced withering progressive attacks about her time as a prosecutor. “Kamala is a cop” became a shorthand attack in the vocal world of progressive activists on social media.

Up until the presidential run, Harris had tied much of her political identity around the idea of being a more progressive, more nuanced prosecutor who championed what she called “smart on crime” approaches: addressing systemic problems like truancy, and trying to return people with criminal records to the workplace.

Harris struggled to respond to the sustained attacks and her campaign stopped highlighting her prosecutorial background.

By mid-summer, she was running on what she called “3 a.m. issues”: economic policies designed to appeal to “a parent, after feeding the kids and putting them to bed, is sitting at the kitchen table until midnight, figuring out to to make everything run, make everything work.”

By the fall, facing dropping poll numbers and campaign contributions, Harris returned to her time as a prosecutor, telling rallies that “in 2020, justice is on the ballot.”

“There was never a clear rationale of why her, and why she was running. She was running for too many reasons — every week there was another major policy thing,” said Brian Brokaw, a longtime Harris adviser who ran her two campaigns for California attorney general. “People knew they liked her, but didn’t know what she stood for.”

But since the coronavirus crisis began, Harris has been at the forefront of the congressional Democratic response. She’s played a leading role in highlighting the fact that COVID-19 has hit African Americans harder than any other demographic group, and has repeatedly pressured the federal government to collect more data on that.

She also joined Vermont Sen. Bernie Sanders and other lawmakers pushing for monthly $2,000 payments to every American for as long as the pandemic lasts.

“People should be able to count on their government to see them and create a safety net for them, so that these families don’t fall into poverty, or further into poverty, during the course of this pandemic,” Harris told NowThis News.

Then, Harris leapt to the next crisis. When protests filled streets across the country to rage against the killing of George Floyd and other African Americans in police custody, Harris was one of the first lawmakers to join the protests herself. She appeared in front of the White House, and on Washington, D.C.’s newly designated Black Lives Matter Plaza.

The longtime prosecutor with the reputation for playing it safe played a lead role drafting a broad bill ending so-called qualified immunity for police, the use of chokeholds and no-knock warrants, and making several other changes demanded by protesters. Joining House Speaker Nancy Pelosi, New Jersey Sen. Cory Booker and other Democrats to unveil the broad measure, Harris put it bluntly: “We’re here because Black Americans want to stop being killed.”

Even critics like Bazelon have taken notice. “She did champion progressive causes,” Bazelon said. “And her record has been consistent, and it’s been good.”

Bazelon said she was particularly impressed by an appearance Harris made on The View, where conservative co-host Meghan McCain pressed Harris on whether or not she supported the “defund the police” movement.

“I thought that Kamala Harris did a really masterful job of defining what needed to happen to reform the police,” she said. “And then when Meghan McCain pressed her to say yes or no, she said, ‘What do you mean by defund?’ And Meghan McCain had no answer for her.”

For the people who want to see Harris on the Democratic ticket, it wasn’t too far of a leap to envision the fall debate, with Vice President Mike Pence in the spot of McCain.