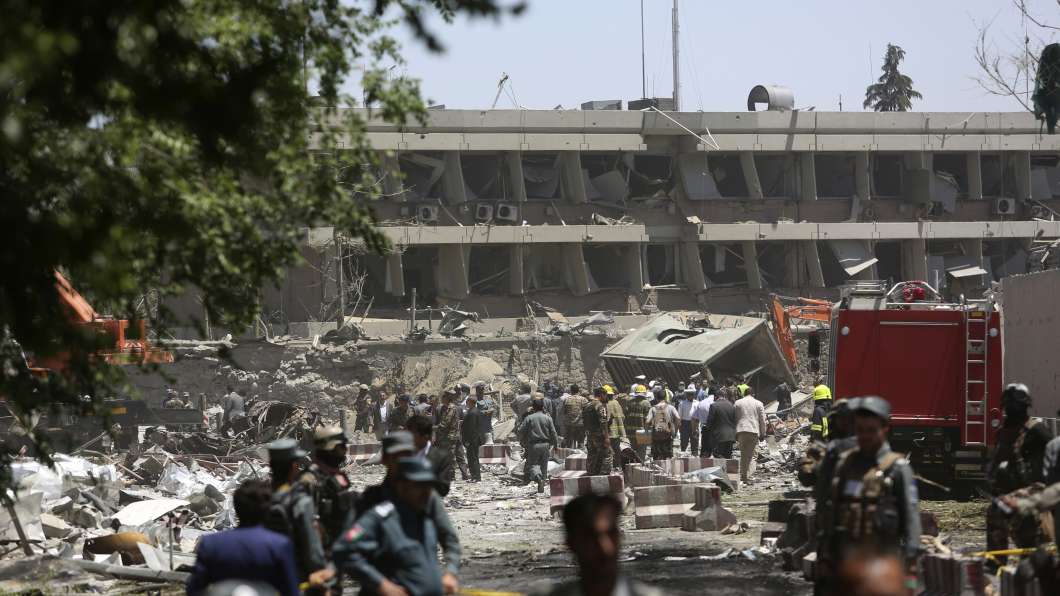 Security forces inspect the site of a massive explosion in a busy area not far from the German Embassy in Kabul, Afghanistan, on Wednesday.
Image credit: Rahmat Gul

The bomb was detonated near Zanbaq Square outside the “Green Zone,” according to the NATO-led Resolute Support mission, which adds that Afghan security forces kept the car bomb from entering the Green Zone, “but the explosion caused civilian casualties in the vicinity.”

The neighborhood is home to several embassies and is not far from the presidential palace.

“The car bomb exploded at the height of the morning rush hour on one of Kabul’s main streets, not far from the German Embassy, at the entrance to the offices of a major Afghan cellphone company and popular TV station.

“It’s not clear what the target was, but as is often the case, many civilians were injured by the blast.

“A mile away there was first a low rumble like an earthquake, then the shock wave from the blast followed and blew open doors and windows. Closer to the explosion it shattered glass in homes, offices and cars.

“Both the Taliban and Islamic State have stepped up attacks on Kabul and elsewhere in Afghanistan.”

An Afghan security officer who had been protecting the German Embassy died in the attack, and while members of the embassy’s staff were injured, “All are now safe,” says German Foreign Minister Sigmar Gabriel.

So far, no group has claimed responsibility for the bombing. Taliban spokesman Zabiullah Mujahid said the group’s fighters weren’t involved and that it “strongly condemns today’s attack,” according to news site Khaama Press.