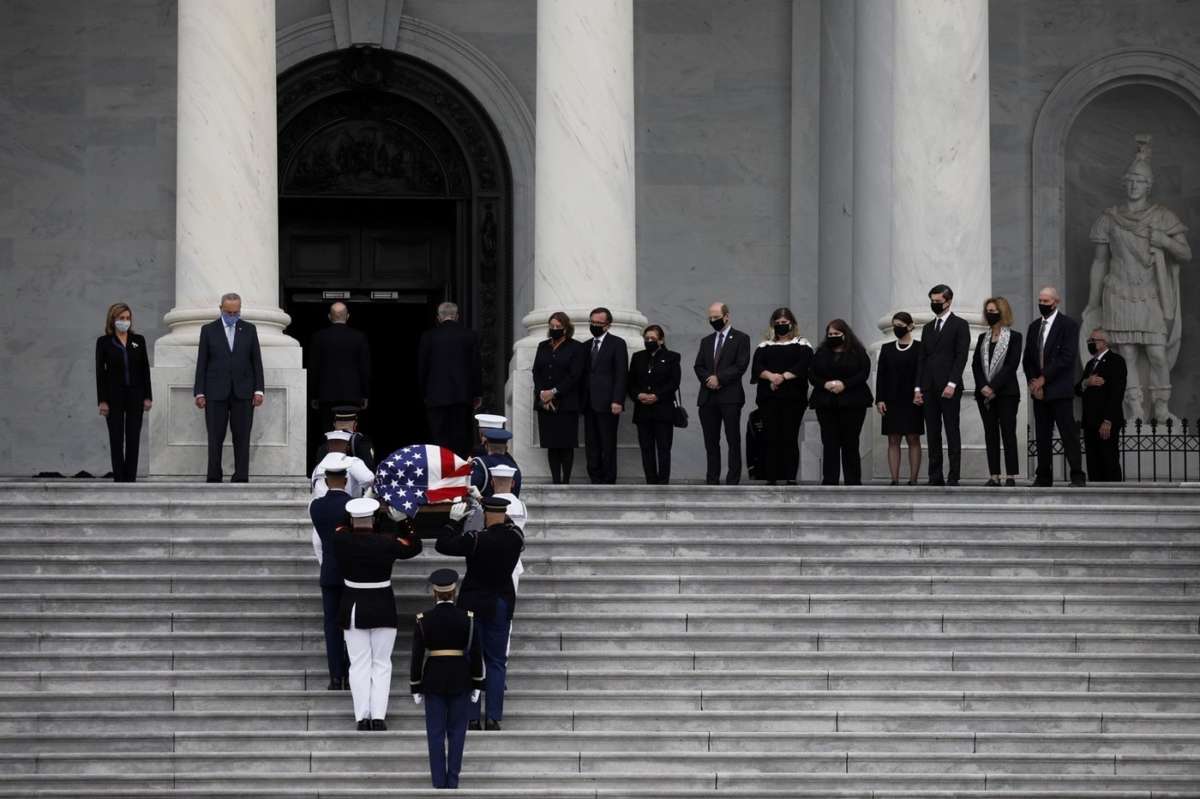 The flag-draped coffin of the late Supreme Court Associate Justice Ruth Bader Ginsburg arrives to the U.S. Capitol where she will lie in state for two hours in Washington, D.C. Cheryl Diaz Meyer for NPR

Supreme Court Justice Ruth Bader Ginsburg is lying in state Friday at the U.S. Capitol, the first woman to be given that honor in the nation’s history.

Ginsburg’s casket was carried into Statuary Hall, just outside the House of Representatives’ chamber, by an Armed Forces Honor Guard. House Speaker Nancy Pelosi, D-Calif., presided over the brief ceremony.

Rabbi Lauren Holtzblatt, who also eulogized Ginsburg as she lay in repose at the U.S. Supreme Court, said of Ginsburg Friday, “As a lawyer she won equality for women and men, not in one swift victory, but brick by brick, case by case. Through meticulous, careful lawyering, she changed the course of American law.”

Ginsburg, who died at the age of 87 from pancreatic cancer, was only the second woman to be nominated to the Supreme Court. Cheryl Diaz Meyer for NPR

Mezzo-soprano opera singer Denyce Graves performed a tribute to the late justice — who was an opera aficionado — and members of Congress filed past Ginsburg’s casket.

Thousands of mourners paid their respects to Ginsburg during the two days her casket rested at the top of the Supreme Court steps, including former President Bill Clinton, who nominated her to the high court in 1993, and President Trump.

Trump’s visit prompted shouting from the crowd of “honor her wish,” referring to the justice’s hope that she would not be replaced on the court “until a new president is installed.” Trump has said he will announce his choice to succeed Ginsburg on Saturday.

Ginsburg will be interred at Arlington National Cemetery on Tuesday, after Yom Kippur, next to her husband, Marty.