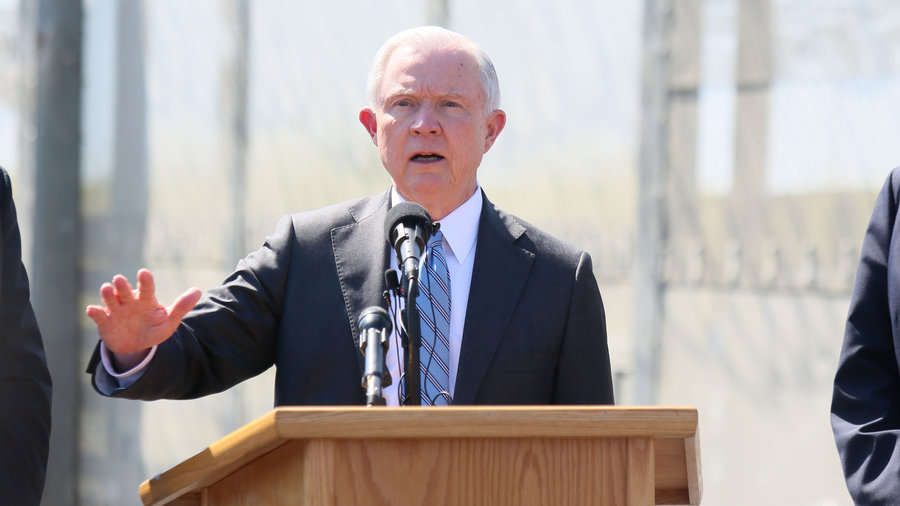 OTAY MESA, CA - APRIL 21: Department of Homeland Security John Kelly and Attorney General Jeff Session speak to the media during a tour of the border and immigrant detention operations at Brown Field Station on April 21, 2017 in Otay Mesa, California. Secretary Kelly and Attorney General Sessions are on the second leg of a tour together this week after visiting El Paso and were joined by U.S. Senator Ron Johnson, Chairman of the Senate Committee on Homeland Security and Governmental Affairs.(Photo by Sandy Huffaker/Getty Images)

Former U.S. Attorney General Jeff Sessions knew his “zero tolerance” policy on illegal entry along the Southwest border in 2018 would separate children from their parents, a watchdog office reported on Thursday. Despite warnings that the government couldn’t care for the children, he pushed forward with the policy. As a result, more than 3,000 children were separated from their families.

Department of Justice Inspector General Michael Horowitz released a critical review which found the department “failed to effectively prepare for and manage the policy’s implementation.”

Trump administration officials “significantly underestimated [the policy’s] complexities and demonstrated a deficient understanding of the legal requirements related to the care and custody of separated children.”

The review concludes that the Justice Department’s “single-minded focus on increasing immigration prosecutions came at the expense of careful and appropriate consideration of the impact of family unit prosecutions and child separations.”

The administration had told federal prosecutors in 2017 to prioritize immigration prosecutions. Throughout the year, the DOJ and the Department of Homeland Security discussed possible policy changes, including criminally prosecuting “family unit adults” and separating them from their children, the report said.

At the same time, the Western District of Texas U.S. Attorney’s Office had begun prosecuting adults in certain instances, even if it resulted in separation from their children. It was referred to as the El Paso Initiative. Prosecutors and judges noted concerns about the whereabouts of the children of approximately 280 broken families.

Following the perceived success of the El Paso Initiative, Sessions’ policy went into effect on April 6, 2018.

Days after his speech in San Diego, U.S. attorneys along the border raised concerns about family separations as well as the whereabouts of children, the review notes. Sessions promised additional resources, but instructed them to stay the course.

The review says Sessions had grossly underestimated the legal and logistical challenges accompanying his policy. His department also failed to effectively coordinate with other agencies, including the U.S. Marshal’s Service, who were given no advanced notice, the review said. The USMS told the DOJ there would be resource shortages, which would impact the safety of the public, courthouses, detention facilities and staff.

Federal judges and other stakeholders along the border grew concerned as the courts became burdened with cases. On June 20, 2018, President Trump issued an executive order that curtailed the policy, replacing it with a similar one that kept families together. The damage had already been done.

Denise Bell, researcher for refugee and migrant rights at Amnesty International USA, called on the incoming Biden administration to make families whole and provide pathways for them to obtain legal status.

“This report reinforces what we already knew: the cruelty was the point and the government ripped families apart intentionally to keep families from seeking safety here,” Bell said in a statement. “This utter disregard for people’s lives caused irreparable harm.”