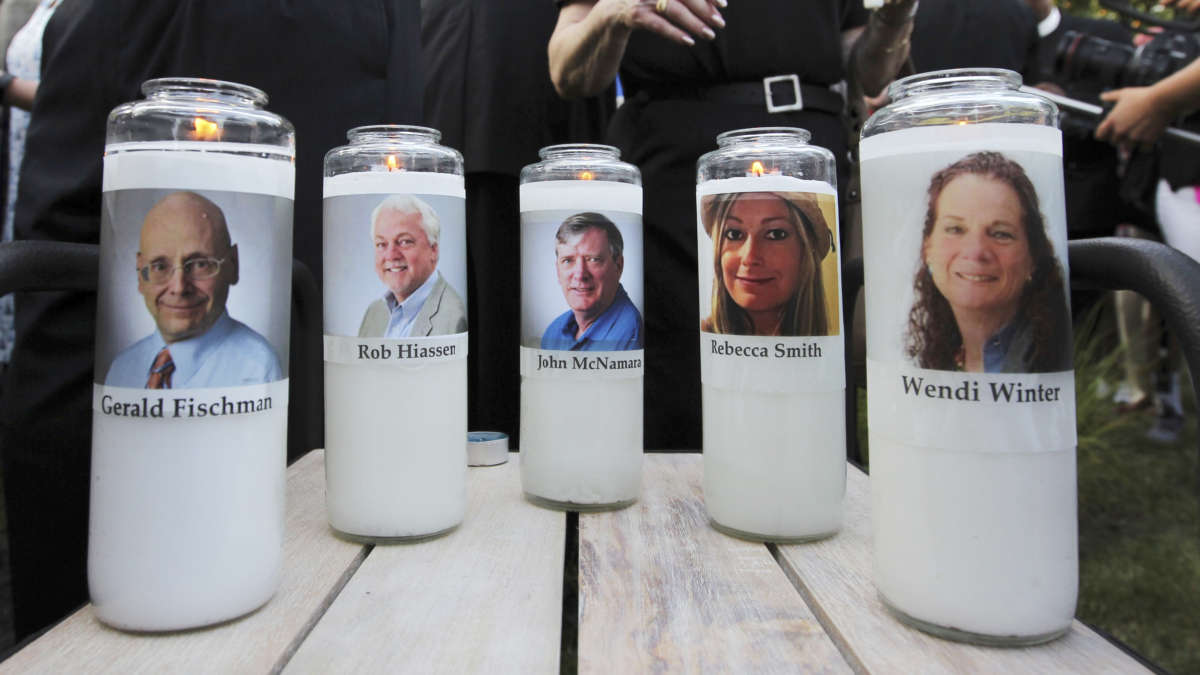 Five employees of the Capital Gazette newspaper are honored across the street from where the the newsroom where they were killed in Annapolis, Md.
Image credit: Jose Luis Magana

The gunman who admitted to a shooting attack on the newsroom of Maryland’s Capital Gazette three years ago, has been found criminally responsible for the massacre of five people.

Jarrod Ramos had maintained he was not responsible because of mental illness but on Thursday the jury rejected that defense, saying the 41-year-old did understand the criminality of his actions when he attacked the newsroom on June 28, 2018.

The verdict means Ramos, who has already pleaded guilty to 23 counts against him, will be sentenced to prison, not a maximum security health facility.

The jury of eight men and four women heard that on June 28, 2018, Ramos traveled to the Capital Gazette newsroom in Annapolis, Md., with a shotgun, hand grenades and several rounds of ammunition, then barricaded the exit doors before opening fire on those working inside. The shooting, the deadliest attack of its kind, left five employees dead: John McNamara, Rebecca Smith, Rob Hiaasen, Gerald Fischman, and Wendi Winters.

The trial began on June 29, one day after the three-year anniversary. The defense asserted that Ramos was not criminally responsible due to insanity, that he was not fully cognizant of what he was doing; prosecutors described the events of that day as a violent act of revenge, the culmination of Ramos’ twisted vendetta against the paper.

According to Ramos, a 2011 article in the Capital Gazette detailing his criminal conviction for stalking a high school acquaintance was slander. He sued the paper for defamation but the case was dismissed.

Ramos did not let up, and in the following years lobbed violent threats at the paper numerous times, according to a report by the Committee to Protect Journalists. He planned the shooting for nearly two years and chose the date and time because he suspected an editorial board meeting would attract more employees to the office that day, Katy O’Donnell, Ramos’ public defender, said.

It was a horrific day that changed everything

Numerous survivors of the shooting took the stand to share their emotional testimonies. Paul Gillespie, a photographer who was at the office that day, recalled hiding among the cubicles, the Capital Gazette reports. He told the court, “I thought ‘oh my god, I’m going to die.’ ”

Some who escaped were forced to avoid the bodies of their murdered coworkers on their way out of the building. Some were shot at but miraculously survived. All have lived with the trauma of that day in the years since.

And after the shooting, Ramos’ attorney said, he was not remorseful, WMAR 2 News reports.

“He believes it was just and fair and it was the only option he had,” O’Donnell said, citing his deluded belief that he’d been wrongly targeted and persecuted by the 2011 article.

Although Ramos, 41, pleaded guilty two years ago to the 23 counts against him, the trial largely focused on his capacity to be held criminally responsible for his actions. He lived alone in Laurel, Md., and his only emotional connection was with his cat. He reportedly blamed the 2011 article about his stalking/harassment conviction for his lonely life and harbored growing resentment and anger toward the paper and the court system. But that obsession stemmed from a host of disorders, the defense claimed: autism spectrum disorder, obsessive compulsive disorder, and delusional disorder were a few that his attorney mentioned in opening statements, according to the Gazette.

Experts hired by the prosecution challenged the validity of those diagnoses, claiming that not enough evidence existed to reach the diagnostic criteria in many cases. One health professional pointed instead to narcissistic personality disorder; another, schizotypal personality disorder.

Prosecutors said Ramos was fully aware of the criminal magnitude of what he was doing. A clinical psychologist called to the stand by the prosecution said that more than eight hours of testing showed that Ramos was not insane and did not have some of the disorders that the defense claimed he did, WBAL-TV reports. Another expert said Ramos had admitted to a state psychiatrist that he’d studied a diagnostic manual so that he could ensure that he came across as mentally ill during interviews about his mental health, according to another WBAL-TV report.

The attack was planned with great detail, prosecutors said, according to NBC Washington. And his personality disorders may have made him “eccentric or odd,” prosecutors said — but “[not] insane.”

“Ladies and gentlemen, this case is about revenge by a person who had a well-planned out scheme,” Anne Colt Leitess, State’s Attorney for Anne Arundel County, said. “He had contingencies in place if his plan didn’t work.”

Prosecutors have asked for a minimum of five life sentences without the possibility of parole.