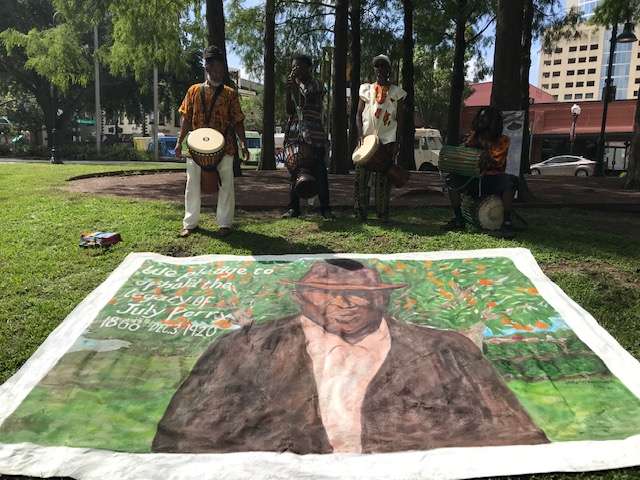 A mural of July Perry outside the event. Photo: Danielle Prieur

A marker unveiled  in downtown Orlando commemorates the lynching of July Perry.

The African American resident was killed during the Ocoee massacre that began on election day in 1920.

Stephen Nunn is a pastor in Tampa and Perry’s great grandson.

He says the marker is both a reminder of the racial violence that killed Perry and a call for tolerance.

Watch history being made in Heritage Square today. https://t.co/cUQQ7gkFlC

“Because I understand one thing. Racism is not something that you’re born with. You have to be taught it. So just as we teach racism. We can teach love and unity and oneness and that’s what we’re going to do.”

Nunn says he wants his great grandfather to be remembered for his courage.

Perry was shot and lynched by a white mob.

Orange County Mayor Jerry Demings says it’s only the start of the reconciliation process with communities who have been targeted by racial violence.

“But I want to be clear this morning that I have no illusions or delusions that anything that we do here today will right the wrongs of a racist past. But what we can do is respect the attempt.”

Equal Justice Initiative Director Bryan Stevenson says that’s why he wants to see other markers like this one for Native American tribes who were the victims of genocide.

“We killed millions of native people. We kept their words. Ocoee these words are native words. But we made the people leave. And it was a genocide. We didn’t call it a genocide because we said these native people are racially different.”

Soil from the site where Perry was lynched was on display-it will be added to the National Memorial for Peace and Justice in Montgomery Alabama.