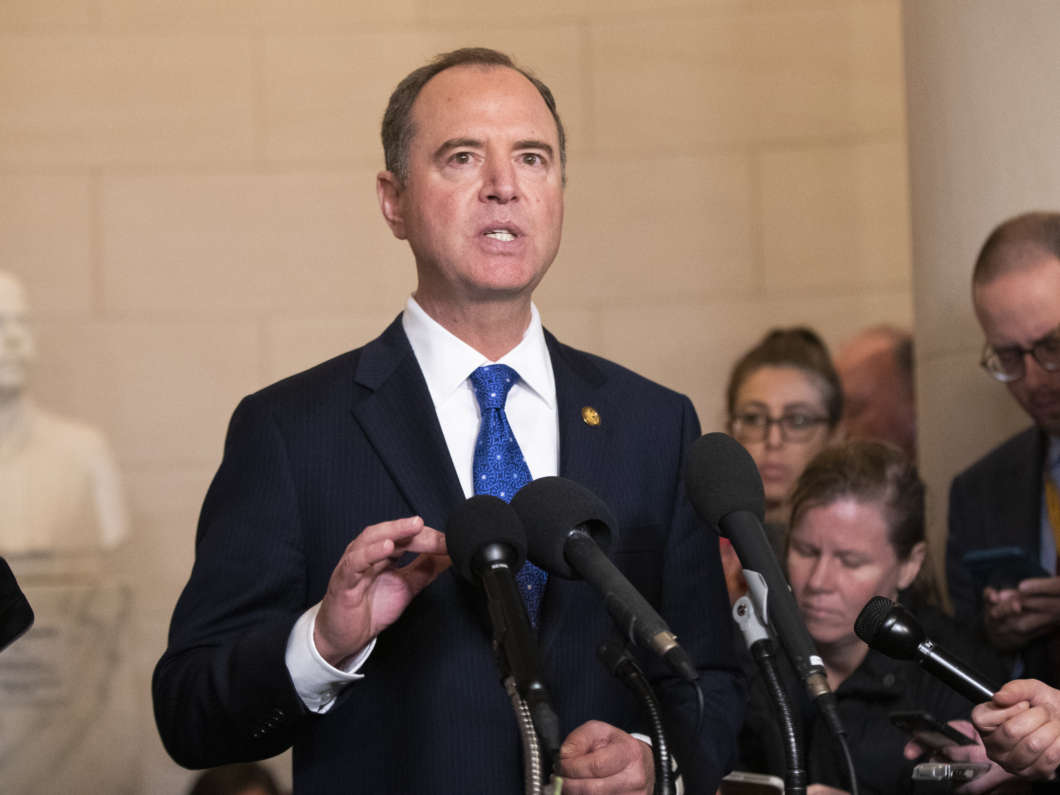 House Democrats are moving closer to impeaching President Trump with two big developments this week — the release of the House Intelligence Committee’s report summarizing their investigation and the Judiciary committee holding its first hearing.

Intelligence Committee Chairman Adam Schiff, D-Calif., said public hearings are over for his panel. He and his staff worked over the Thanksgiving recess to pull together the committee’s findings and recommendations. In a letter to lawmakers before the holiday, Schiff noted that the open hearings included testimony from 12 witnesses, and those were supplemented with 17 closed-door interviews conducted with two other panels — the Oversight and Foreign Affairs committees.

The release of the report and the Judiciary hearing, timed with the return of lawmakers this week, indicate that top leaders are still aiming to wrap up House action on impeachment before the Christmas holiday break.

Schiff had indicated that he won’t wait for ongoing litigation about current or former administration officials appearing before Congress, noting in his letter, “we will not allow the President or others to drag this out for months on end in the courts.”

On Sunday evening, the White House said it would not appear at Wednesday’s Judiciary hearing but declined to comment on future participation.

Here’s what the next steps in the impeachment process look like:

Will the public see the report?

What are the requirements for the Intelligence Committee report?

The House resolution directs the House Intelligence committee to prepare a report with recommendations and send it to the House Judiciary Committee.

The report is also required to be released publicly, but it could have some redactions to protect classified materials. Schiff is also supposed to consult with the chairs of the Oversight and Foreign Affairs committees on the report.

Republicans on the Intelligence committee are expected to produce their own report on the investigation, which is likely to reiterate the complaints that GOP lawmakers have made since the inquiry began — that the process was unfair and did not provide the president or his legal team to respond to allegations. House Speaker Nancy Pelosi, D-Calif., has argued that if the president wanted to correct the record or weigh in with new evidence that he should do so “under oath.”

What is the House Judiciary Committee’s role and what is it planning?

The committee is holding a hearing on Wednesday, December 4, with some legal experts on the nature of impeachment and the standard set out in the Constitution for “high crimes and misdemeanors.”

Under the House impeachment resolution the Judiciary committee is directed to review the report from the Intelligence committee. It is also supposed to take recommendations from the other committees who have investigated the Trump administration about any other possible impeachable offenses.

It will then determine which, if any, articles of impeachment should be drafted. So far Pelosi has signaled that she wants to keep the focus narrowly on the issues around the Ukraine investigation. But some in her caucus have raised the possibility of other articles related to questions about the president’s financial dealings and issues stemming from Special Counsel Robert Mueller’s report looking in to Russian interference in the 2016 election.

Judiciary would hold a markup on any articles, and if the committee approves any, they would be referred to the full House of Representatives for a vote.

Will the president’s team get an opportunity to present their own evidence or respond to the report?

Yes. After the House adopted the resolution establishing the ground rules for the impeachment inquiry, the Judiciary committee released its own set of procedures for its part of the process. Those rules provide the president and his counsel the ability to attend any sessions and question witnesses, respond to any evidence presented by Democrats and give a closing argument.

In announcing the December 4 hearing, Nadler sent a letter to the president notifying him about the hearing and giving his legal team a deadline to respond if they plan to participate.

“At base, the President has a choice to make: he can take this opportunity to be represented in the impeachment hearings, or he can stop complaining about the process. I hope that he chooses to participate in the inquiry, directly or through counsel, as other Presidents have done before him,” Nadler said.

Democrats maintain that these Judiciary committee procedures mirror the ones used for both the impeachment proceedings for Presidents Nixon and Clinton. But Republicans on the panel have already complained about the rules and submitted letters to Nadler pushing for “procedural fairness.”

On Sunday, the White House said Trump would not participate in the Wednesday hearing but did not comment more broadly on whether the president and his counsel would attend any future sessions.

What articles of impeachment are Democrats considering?

Schiff proclaimed after key testimony in his committee’s open hearings that there was evidence of bribery. He has also cited the multiple refusals by Trump administration officials to comply with subpoenas or requests to testify as grounds for an article of impeachment on obstruction of Congress.

Pelosi is expected to consult with House Democrats after the report is released to decide what action the caucus backs. Only two House Democrats opposed the initial resolution formalizing the impeachment inquiry — Rep. Collin Peterson of Minnesota and Rep. Jeff Van Drew of New Jersey. But as the process moves closer to taking a vote on the House floor, it’s possible some Democrats, especially those from competitive districts, may back away.

When could the House vote on any articles of impeachment?

The full House vote on any articles of impeachment is likely to happen this month.

“Speaker Pelosi remains absolutely committed, so I just think she is hell bent on getting this wrapped up by the end of the year,” Rep. Jim Himes, D-Conn., a member of the House Intelligence Committee, told reporters last week.

Pelosi has been careful not to guarantee whether the House will consider articles of impeachment or put a hard deadline on the process, but she has said the evidence related to the Ukraine matter is “uncontested.”

The House is scheduled to be in session through December 20 — which is also the deadline for Congress to approve a funding bill to avoid a possible shutdown. It’s also possible that the session is extended if lawmakers are still debating the issue.

If the House impeaches Trump will he be removed from office?

Senate Majority Leader Mitch McConnell, R-Ky., has said that it’s “inconceivable” that there are the votes in the Senate to convict and remove the president — a two-thirds majority would be needed (67 votes). McConnell said the Senate will quickly proceed to hold a trial, but it’s unclear how long that process would take.

When would a Senate trial take place and how long would it take?

McConnell said he wants to work with Senate Minority Leader Chuck Schumer, D-N.Y., on a resolution establishing the rules for a trial. Those negotiations could happen in early January if the House transmits any articles of impeachment by the end of the year. McConnell has said he didn’t know how long a trial would take, noting that the Senate spent two months dealing with the Clinton impeachment once the House transmitted articles of impeachment.

He also recently noted that a trial would tie up those Senate Democrats running for president. “I’m sure they are going to be excited to be here in their chairs — not being able to say anything during the pendency of this trial. So hopefully we’ll work our way through it and finish it in not too lengthy of a process.”

Republican Senators have already been meeting with White House officials to map out a trial and have discussed the possibility of one lasting just two weeks.