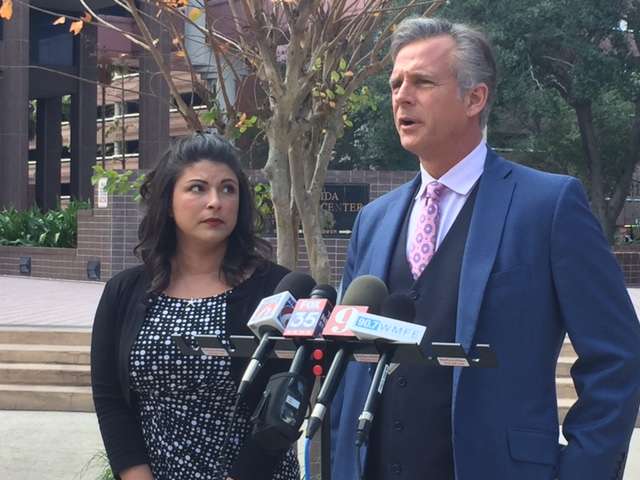 Jessica Realin and her attorney Geoff Bichler spoke to reporters Monday after a judge heard the Realins workers compensation case.

The city of Orlando was in court Monday arguing against paying workers compensation benefits to a police officer with post-traumatic stress disorder.

Realin’s lawyer Geoff Bichler argued his hypertension is a physical manifestation of the PTSD and so the lost wages should be paid.

“What we tried to argue today was sort of a novel legal argument, that because Mr. Realin also suffers from hyper tension, that was a physical manifestation of PTSD that therefore implicated payment of monetary benefits,” Bichler said. “So it’s a relatively novel argument.”

No word on when the judge will rule. Either way, it will likely be appealed. Bichler said they’re asking for about $25,000 from the city.

“You’re sitting there watching them pick apart a person, and this person served this community for 13 years proudly,” Realin said. ” For them to tear him apart as if his service didn’t matter, it’s disgraceful.”

The city of Orlando says it’s committed to the health and wellbeing of officers.

“The City does not determine what is and is not covered under workers comp; that is per state law,” the city wrote in a statement. “For background, following the Pulse tragedy, when Mr. Realin was unable to come to work, he was offered counseling and was paid his salary for over a year. At that point Realin voluntarily requested a full disability pension, which the City granted and as a result Realin receives 80 percent of his salary tax-free, plus health insurance, for life.”

Tallahassee lawmakers are considering a change to the workers compensation laws for first responders with PTSD.