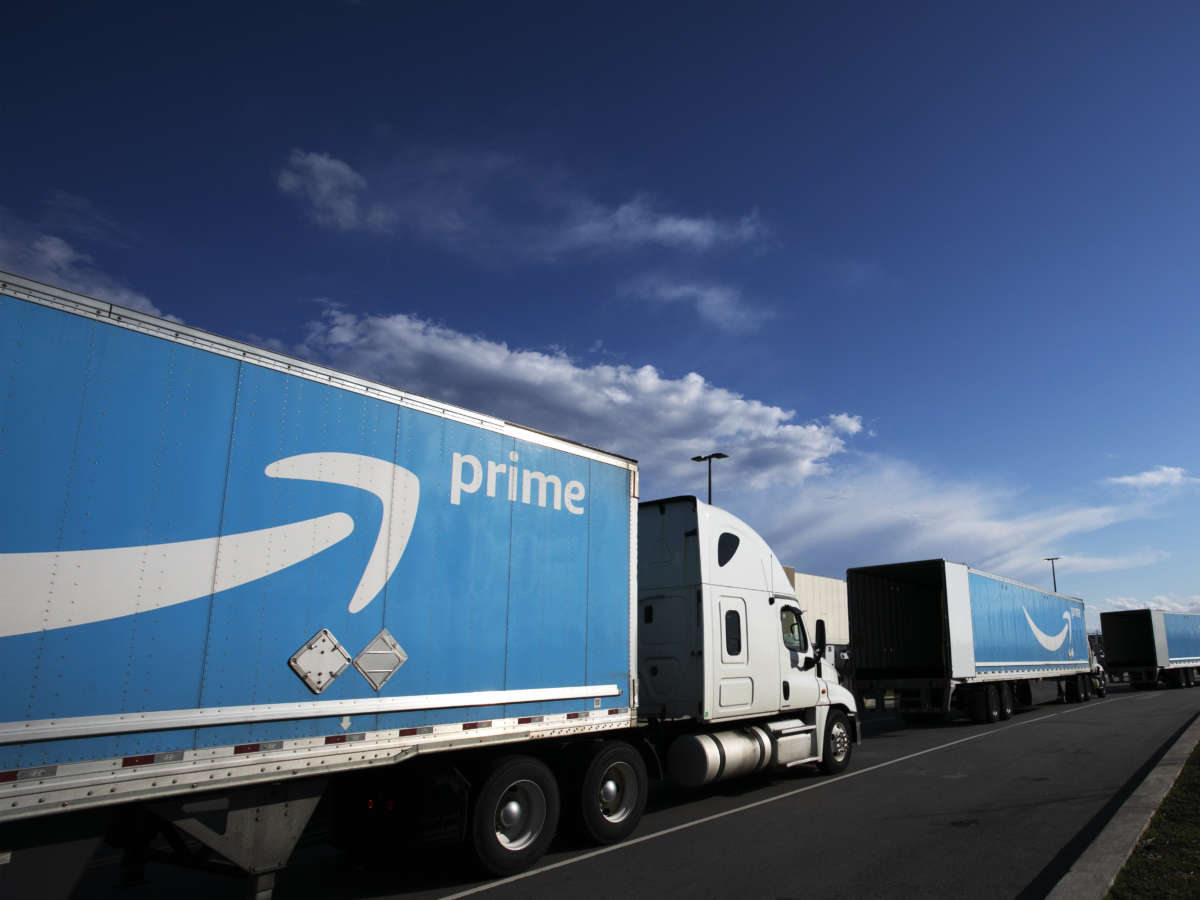 Amazon tractor trailers line up outside the Amazon Fulfillment Center in Staten Island, N.Y., in April 2020. The pandemic has been good for the company's bottom line.
Image credit: Mark Lennihan

Ballots are being counted this week in what could be a watershed election in Bessemer, Ala.

The vote will determine whether nearly 6,000 employees of the Amazon warehouse there will be represented by a union, something Amazon has forcefully resisted in its workplaces across the country.

Journalist Alec McGillis says the stakes of the vote are “enormous.”

MacGillis writes about Amazon’s growing impact on American life in his new book, Fulfillment: Winning and Losing in One-Click America. He notes that the pandemic has been very good for the company’s bottom line: Amazon’s sales jumped 40 percent last year, and company founder Jeff Bezos, whose net worth is estimated at around $180 billion, is now the richest person on the planet.

“The fact is that the company grew so much over the past year because Americans, in much greater numbers than before, really embraced the sort of ‘one-click’ approach to our daily life,” MacGillis says.

But not everyone has benefited from Amazon’s success. While the company has boosted employment and economic opportunities in some locations, other areas have become stagnant. MacGillis notes that communities that are home to Amazon warehouses don’t always come out ahead.

“Working at an Amazon warehouse has really become the mass-labor option for Americans,” MacGillis says. But, he adds, “the Amazon job also does pay quite a bit less than the manufacturing jobs of yore … despite the fact that the jobs in these warehouses are often nearly as strenuous or physically taxing as those manufacturing jobs were.”

Amazon is so ubiquitous that it can be hard to avoid its reach. MacGillis admits that he’s not an “absolutist” when it comes to one-click shopping.

“I use Amazon when I have to,” he says. “This is not about a cold-turkey approach. It’s just about thinking about our purchases, thinking about the way we live and really thinking about what lies behind that one-click.”

On Amazon’s effort to fight off the union drive in Bessemer, Ala.

They may have been somewhat more constrained because there was so much scrutiny on this particular election. They know that there are a lot of eyes on them, but they’ve still been quite aggressive in trying to head off the union. Just constant messages, anti-union messages, coming to the workers. They’ve, as usual, hired law firms that specialize in fending off unions. There’s just been a very strong sense of just how displeased they would be if workers were to vote to organize, to the point where there’s some concern that Amazon might actually shut down this entire warehouse if there were, in fact, a vote to organize. So they’ve been very, very aggressive while being somewhat more aware of just the fact that the eyes of the country are on them in this case.

On what its like to work in an Amazon warehouse

It’s not only demanding, but it’s incredibly repetitive. I think a lot of us kind of hoped that as work got more automated in warehouses like this, and you got more and more robots into there, that it would kind of free up people to do more autonomous, fulfilling kind of work. In fact, the opposite has happened. Bringing the robots in has actually made the work more repetitive and more essentially robotic. … And it’s also just so isolating. The isolating quality of the work has gotten even worse during the pandemic, because there’s been an effort to separate people out more on the floor so they don’t give each other the virus. So work that used to be done maybe by two or three people in a given part of the floor is now done by just one person, which not only makes the jobs tougher, but also makes them more isolating.

The loss of community in these jobs is one of the big parts of what’s changed, the fact that you used to know all the people you worked with, you were maybe related to some of them. After you left work at the steel mill on Sparrows Point [in Baltimore], you would often, of course, roll out of your shift and go to the bar, go to the diner, whatever it might be with the people you worked with. Now you go in, you do your shift, your 10-hour shift — it’s very grueling, repetitive, demanding — and then you get the heck out of there. A former mill worker who lives nearby says … that they’ve had full speed bumps [put] in because people are just desperate to get out of there.

Typically, it’s some form of a tax subsidy, where the company will not have to pay all the taxes that would normally be due both on the property itself (the warehouse [or] the data center) or payroll taxes on the workers that will be employed at them. So, essentially, just a great reduction in its tax bill in the community where it’s setting up shop. And the effect of this is, of course, to erode the local tax base and to greatly reduce the amount of money that’s coming into local coffers, to support local services, to support the roads and the police and fire and schools.

One reason this is a special problem is that Amazon, when it comes into a community, of course, brings much greater demands for public services. There’s all the wear and tear on the roads that come with the incredible increased traffic of cars and trucks [and] delivery trucks. There are frequent calls for emergency assistance at the warehouses. The Amazon warehouses tend to have their own in-house medical teams that are called AmCare, but they’re not always on duty or they can’t sometimes handle the severity of a given case, including some of the fatal accidents that I wrote about in the book. And so you have police and fire and EMS in the local community having to respond to the warehouses for lots of calls when Amazon is itself not supporting those services through the tax dollars that it has essentially been able to avoid paying.

On how Amazon uses its data to knock out competition

The company is able to collect so much data about what kind of products are doing well and then in many cases … it has then managed to come up with products of its own where it’s actually selling products under its own labels. So it’ll go out and get some manufacturer to make a given product that strongly resembles the one that was doing well on the site from some other seller and then sell it under one of its own private-label names. Amazon says this is hardly any different than retail companies that for years now have offered their goods under their own own labels. You go into the grocery store and you see all manner of goods that that grocery store or other retailers [are] selling under their own label. The difference is the data that Amazon has been able to collect and the way it’s been able to use the data it’s collecting on sales on the site to inform its own decisions to go after a particular product. And there’s just been all sorts of examples of it being able to essentially just knock out a product that was doing well on the site and then sell it under its own name.

The Washington Post has benefited greatly from the investment by Bezos, and I’m very happy for my former colleagues there who simply have more resources now to do their jobs. There is a fundamental awkwardness that comes with one of the richest men in the world, the founder of this enormous, powerful company, owning the newspaper. The newspaper has done quite a good job of covering various aspects of Amazon. They have a very good reporter based in Seattle who covers the company. They occasionally do tough stories about various aspects of the company, whether it’s the counterfeit goods on the site or other things.

What the newspaper has been in an awkward position to cover is the whole scale of the takeover of Washington by Amazon. That is a huge story that has not yet really been covered by the paper. One can’t help but think that if a different company had acquired as much influence and scale and presence in Washington, that the local newspaper would have been writing about this in a big way. That you haven’t really seen yet in the Post. All of my former colleagues there assure me that there’s no calls coming from Seattle telling them not to do this or that story, and I believe them. It’s a more existential problem than that. It’s really tricky for the paper to tell in a big way what is happening with the Amazon takeover of Washington.

Sam Briger and Thea Chaloner produced and edited the audio of this interview. Bridget Bentz, Molly Seavy-Nesper and Meghan Sullivan adapted it for the Web.