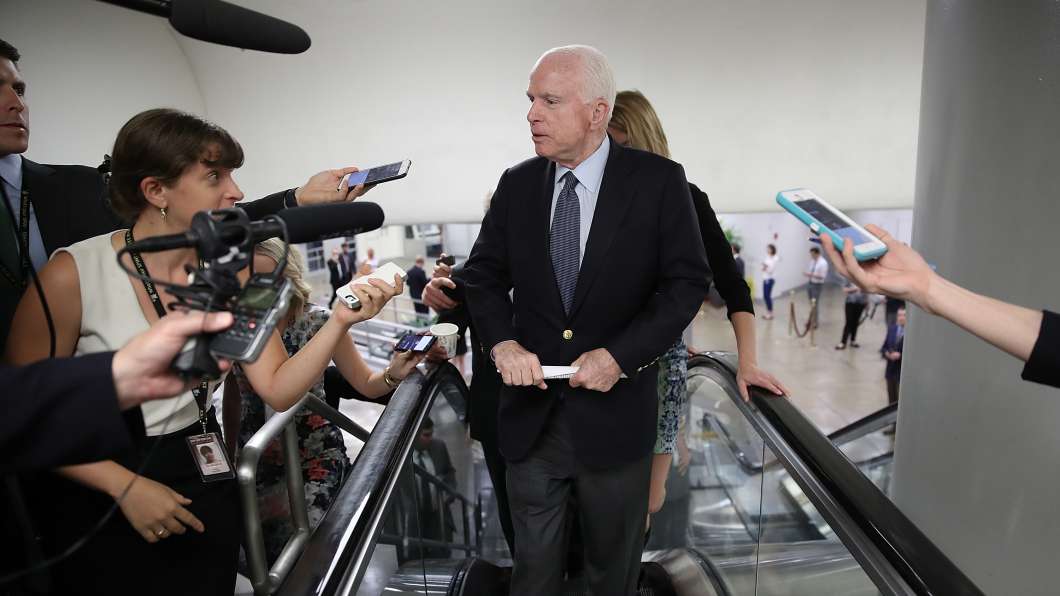 Sen. John McCain, R-Ariz., answers questions from reporters on Capitol Hill earlier this month. He makes his return to the Senate for the first time since being diagnosed with brain cancer last week.
Image credit: Win McNamee

It was just five days ago that John McCain, the longtime Arizona senator, two-time presidential candidate and perhaps America’s most famous prisoner of war, was diagnosed with a deadly form of brain cancer.

And yet, McCain is set to make a dramatic return to the U.S. Senate Tuesday for a key vote on health care.

It will be a remarkable moment, to see this man, whom his daughter described poetically as a “warrior at dusk,” take his place again in the “world’s greatest deliberative body,” where he has represented his southwestern state for 30 years.

But what is he coming back to? It’s not clear what the Senate is going to vote on exactly. And the ostensible leader of his party, Donald Trump, is lashing out at the GOP.

McCain’s presence is an indication that Republican Senate leader Mitch McConnell, who controls the agenda, may believe he has the votes to pass a motion to proceed on health care.

A motion to proceed is what it sounds like — a measure to allow debate to begin. There would be 20 hours of debate, which would expire Wednesday, NPR’s Susan Davis reports.

And it’s not even clear the GOP has the votes to pass that. Republicans can only lose two votes for a majority without Democrats, and Sen. Susan Collins, R-Maine, is a no on the motion to proceed.

McCain is a yes, and without him, that would give zero cushion, and as it is, the cushion is pretty flat.

Beyond the motion to proceed vote and the ensuing debate, no one is quite sure — not even Republicans — what of substance the GOP will try to pass to overhaul health care, which affects one-sixth of the U.S. economy.

McConnell promised to bring a full repeal bill with a two-year delay to the floor, which President Trump seemed to be on board with. But, to this point, the votes aren’t there for that. Too many Republicans came out publicly opposing that idea.

So then what? If the full repeal isn’t brought to the floor, or if it fails, then it’s on to the Senate’s version of no-holds barred — a “vote-o-rama,” where anyone can bring any amendment to the floor and have it voted on.

That’s kind of like doing the work normally done for months in committee out on the Senate floor in a matter of hours and days.

This is just the latest chapter in Republicans’ difficulty replacing Obamacare. Legislatively, they have been plagued by starts and stops during the Trump presidency, unable to get their differing ideological factions on the same page.

“Obamacare is the law of the land,” House Speaker Paul Ryan declared after the House’s health care flame out months ago.

But, through arm twisting and legislative tweaks, the House eventually passed a version that tinkered with the Affordable Care Act. The Congressional Budget Office said the law would increase the number of uninsured by tens of millions, especially because of how it would change Medicaid.

Nonetheless it was a political victory, if only a lead at halftime. It was greeted by Bud Lights in the House and a Rose Garden celebration with the president of the United States. There was no “45” jersey with GOP up front and “Trump” on the back, but there might as well have been.

One would have thought a new law had been signed. It hadn’t. The House version was headed to the Senate, where it would certainly change and have to be reconciled with the House.

Back to the drawing board.

Nearly three months later, and that Rose Garden ceremony remains the high point for Republicans. The GOP has not been able to gather the votes in the Senate — and that has started to really rankle President Trump. His irritation was evident during his appearance Monday at the Boy Scouts National Jamboree in West Virginia.

“As the scout law says, a scout is trustworthy, loyal,” Trump said. He added, “We could use some more loyalty, I will tell you that.”

Speaking of Health and Human Services Secretary Tom Price, an Eagle Scout who was on stage with him, Trump said, “Hopefully he’s going to get the votes tomorrow to start our path toward killing this horrible thing known as Obamacare that’s really hurting us.”

Trump spoke of Price as if he were McConnell, as if he had some control over whipping the votes on health care. Price wasn’t even a senator; he was a member of the House from Georgia.

He turned to him, smiling, as if to say, “Only kidding.”

Or maybe not. That came on the same day he called his attorney general, Jeff Sessions, “beleaguered”:

On Tuesday morning, he tweeted criticism of Sessions, calling him “weak” on Hillary Clinton and “leakers” from the intelligence community:

Sen. Capito is West Virginia Sen. Shelly Moore Capito, one of the holdouts on voting for what Republicans have so far proposed when it comes to health care. She’s one of a dozen or so senators who have not committed to even voting for the motion to proceed.

Nevermind that Boy Scouts is supposed to be an apolitical organization. The group put out a statement after the speech saying it does not endorse any candidate.

Trump has begun referring to Republicans as “they” and “you” (“they” promised to repeal and replace Obamacare for seven years, “you” didn’t do it). It’s a remarkable effort to separate himself from the party he’s supposed to lead.

He tweeted that any senator who votes against the motion to proceed is for Obamacare:

And he seemed to threaten them politically:

Where any of this goes is anyone’s guess. But as a nation watches a new president, who is blowing through with Twitter maelstroms and appears ready to politically fire in all directions, the Senate will pause for a moment to recognize a man in McCain who means something very different.

And then it’s back to the wind.