John Glenn, First American To Orbit The Earth, Dies At 95 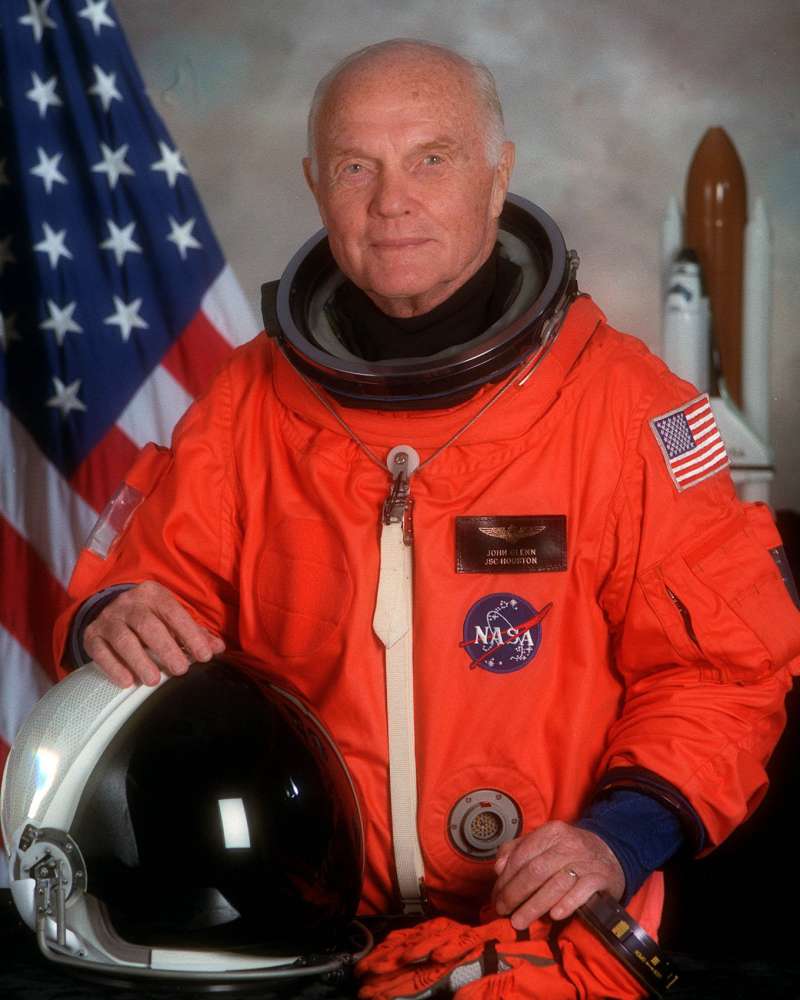 Portrait Of U.S. Sen. John H. Glenn Jr. in 1998, when he served as Payload Specialist For Space Shuttle Sts-95. Glenn has died at the age of 95.
Image credit: NASA

The first American to orbit the Earth has died. John Glenn was the last surviving member of the original Mercury astronauts. He would later have a long political career as a U.S. senator, but that didn’t stop his pioneering ways.

Glenn made history a second time in 1998, when he flew aboard the shuttle Discovery to become the oldest person to fly in space. Glenn was 95; he had been hospitalized in an Ohio State University medical center in Columbus since last week.

Glenn had been battling health issues since a stroke a few years ago. His death Thursday was confirmed by Hank Wilson, communications director of the John Glenn College of Public Affairs at the Ohio State University.

On Feb. 20, 1962, when John Glenn rocketed into space, it was momentous and nerve-racking. Space travel was in its infancy. Every launch and mission captivated the imagination of America.

A few minutes after liftoff, Glenn’s Friendship 7 capsule reached orbit and people listened in with excitement and awe.

“Roger, zero G and I feel fine,” Glenn relayed from space. “Capsule is turning around. Oh, that view is tremendous!”

So much about space in those days was unknown and laughable today. Scientists designed experiments to study whether astronauts could eat or drink in space. Doctors were concerned that human eyes would change shape, making it hard to operate during re-entry.

Then there was the technology. Rockets exploded during testing, sometimes with the astronauts watching. In 2012, on the 50th anniversary of his Mercury flight, Glenn reflected on the danger.

“It was important because of the Cold War,” Glenn said at a Smithsonian forum. “It was a new step forward, and we were proud to be representing our country there. And so … you made it as safe as you possibly could, and what little bit of risk was left, we accepted that.”

Any trip to space is risky, and Glenn’s mission was no exception. During his three-orbit flight, controllers were concerned about an automated warning that the capsule’s heat shield had come loose.

After the flight, he became a national hero. He befriended President John F. Kennedy and received a ticker-tape parade in New York City.

“I think John Glenn will be remembered as an actual hero at a time when heroes are often called heroes but are not,” says Francis French, the author of many books on the space program’s early days.

French says Glenn was basically an all-American boy with a photogenic smile and a quick wit.

“I think John Glenn is one of those people that’s going to stay in the history books,” he says. “And even the most cynical of history readers is going to go, ‘This guy actually is what everybody says he was.’ ”

French says Glenn was “exactly at the right place at the right time for when America needed somebody to not only become the first American to orbit the Earth, but to actually project what it meant for America to put a person into space.”

A life in flight and politics

Glenn was a highly-decorated Marine who flew 59 combat missions in the South Pacific during World War II. During the Korean War, he flew 90 combat missions, using different models of new jet fighters.

He remained in the military through the 1950s, testing supersonic aircraft and other military models. In all, her earned the Distinguished Flying Cross five times. In 1958 he was one of 508 pilots tested for what became the Mercury program, an accelerated response to the Soviet Union’s successful launch of the first satellite in 1957.

He left NASA in 1964. Later he would learn that, at the time, NASA and President Kennedy had deemed him too valuable to fly in space again.

In 1974, he was elected to represent Ohio in the U.S. Senate. Two years later, Glenn’s name was among those mentioned as a running mate for Democratic presidential nominee Jimmy Carter, but Carter ended up picking Sen. Walter Mondale of Minnesota.

Glenn campaigned in the Democratic primary for the 1984 presidential election, but ended up losing to Mondale.

But he remained in the Senate, serving four six-year terms.

During his Senate career he was noted for his attention to NASA and to national defense. He was also remembered for his support for the Panama Canal treaty in the late 1970s and for his resistance to the decision to televise the Senate floor debates on C-SPAN. He warned that the Senate’s reputation for deliberation would suffer if it became, in effect, a TV show. He retired from politics in 1999.

A pioneer once again

But as his political career was ending, he wanted to go back to space. In 1998, he lobbied NASA to fly again. Glenn spent nine days aboard the shuttle Discovery — for science.

“For four days, I had 21 different leads — brainwaves and respiration and EKG — 21 different body parameters being recorded and sent down to the ground,” Glenn said in 2011.

As a 77-year-old, he became the oldest person to fly in space. His flight revived public interest in NASA. But when NASA canceled the shuttle program and scaled back its ambitious exploration efforts, Glenn lamented the loss. He spoke during a 2011 forum at the Smithsonian National Air and Space Museum.

“The average person [was] better educated … back years ago than most people in the world. And then we put more into basic research and learned the new things first,” he said. “That little combination is just as true today. If we lose that edge in research and education, we won’t be a leading nation in the world. It’s that simple.”

Ron Elving contributed to this story.