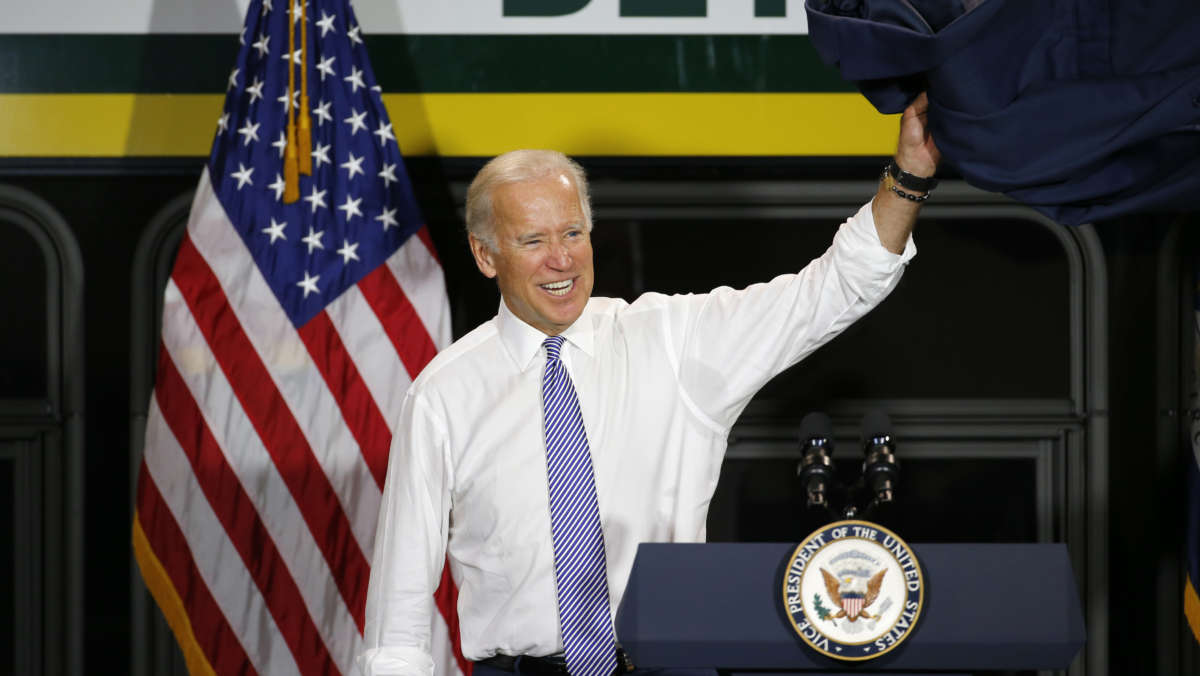 With a shiny, city bus as backdrop, Vice President Joe Biden rolled up his shirtsleeves for a 2015 speech in Detroit.

“Detroit isn’t just an important city,” he told the crowd at an event celebrating the arrival of 80 new city buses. “It’s an iconic city.”

As vice president, Joe Biden visited Detroit nearly a dozen times, more than President Obama. He was in Detroit again on Monday, this time campaigning for the White House before Michigan’s Tuesday primary.

In Detroit, Biden often talks about his affinity for the city. He tells audiences how he’s a car guy, that his father sold cars for a living, that he connects with the city’s working class character.

But the voters in this majority black city are also key to Biden’s political future. The question now is how much Biden’s history in Detroit, and as Obama’s vice president, will drive the decisions voters make here in 2020.

“We would never, never abandon the people of Detroit,” he told the crowd in 2015. “It’s like abandoning the heart of America. And so folks, the president and I decided to bet on the automobile industry, bet on Detroiters, bet on this city.”

The city had a year earlier emerged from the largest municipal bankruptcy in U.S. history. During the recession, unemployment had soared into double digits and the auto industry teetered on the brink before President Obama expanded a multi-billion dollar bailout initiated by President George W. Bush.

Over dinner in Detroit, Biden had asked the city’s new mayor, Mike Duggan, what he could do to help the city. Duggan said buses. The city needed new buses.

Detroiters sometimes waited hours for a bus to show up, if it came at all. Most of the time, only 58% of the aging fleet were on the road. The vice president came up with a plan. He pointed Duggan to a new Obama administration grant competition.

For months, Biden kept checking in. Once, Biden called from an official trip to Ukraine to tell Duggan he hadn’t forgotten about the buses.

“He must have called me back a half a dozen times to make sure the project was on track,” Duggan said in an interview from his office, with sweeping views of the Detroit Riverfront.

“President Obama, when I went to the White House once, referred to him as the Vice President of Detroit,” he said.

Duggan, who endorsed Biden early on, says the former vice president kept tabs on efforts to replace the city’s dismal streetlights and tear down vacant houses. He once showed up at a backyard barbeque and several times headlined the city’s Labor Day parade.

“His heart naturally goes to the underdog,” Duggan says.

That feeling is common among many Detroiters, particularly older voters.

Cindy Reese introduced Biden at that event in 2015.

“I was shaking in my boots,” she said, showing a photo of her and Biden on that day. “But he said, ‘If you get nervous, just say here’s Joe!’ And that relaxed me.”

Back then, Reese told the crowd how her grandson had to walk miles to school in the middle of a Detroit winter when his bus didn’t show.

“The buses were ragged, they were breaking down,” she says now. “We hadn’t had buses in so long. And it was just pitiful.”

Reese says Biden’s dedication to Detroit has literally helped make her family’s life better. And she says that’s true for a lot of people.

Over at the Adams-Butzel Recreation Center, Gloria Rogers is in water aerobics class for seniors, doing a move called the “cross-country.”

While she swayed her foam bar-bells back and forth in the water, Rogers said there’s no question who she’s voting for: Joe Biden.

“We need to feel embraced, we need to feel like we did when Obama was president, that we’re loved and that we’re going to be protected,” she said. “No drama Obama. We need that. We want that.”

Wilson is a big Biden guy. He’s seen him speak twice and met him once.

“It’s like somebody that you’ve known, seemingly forever,” he said. “Where else have you heard of a public elected official, that will get on public transportation, and go from D.C. to Delaware everyday. You can’t get any more warm and fuzzy than that.”

Wilson, who is the sergeant-at-arms for the 14th District Democratic Party, says he’s feeling good about 2020.

“In 2018, there was a blue wave,” he said. “Let’s turn that wave into a roaring, crushing, resounding tsunami.”

But there’s an undercurrent to all this.

Branden Snyder had a close up view. In 2016, he led youth outreach for Clinton’s campaign in Michigan.

As he knocked on doors that fall, Snyder said he got the sense from many voters, especially young people, that they weren’t enthusiastic about the former secretary of state.

“That started to feel deafening as it got closer to November,” he said outside a rally last week for Sen. Elizabeth Warren in Detroit.

Snyder is now executive director of a community organization called Detroit Action. The group has endorsed Sen. Bernie Sanders. Snyder said Warren was his first choice, but now he plans to vote for Sanders.

The Vermont senator won the Michigan primary in 2016, and he’s been aggressively campaigning in Michigan this weekend, banking on another upset win to propel his campaign forward.

Snyder voted for the first time in 2008 for Barack Obama, but his politics have been evolving since then. That’s in part because of issues he says the Obama years left on the table, like dealing with student loan debt and police brutality.

“So a lot of folks don’t necessarily see Biden as a savior kind of candidate,” he says. “They see him as emblematic of all the things that went wrong or the failed promises. It’s only so long he can talk about 2008 to 2016 because many of the voters were children at that time and don’t have any memories of that.”

Snyder worries if Biden doesn’t rejigger his pitch, some voters will stay home again in November.

Michigan Lt. Gov. Garlin Gilchrist is trying to bridge that gap. He endorsed Joe Biden last week. He’s also a black millenial from Detroit who voted for Bernie Sanders in the 2016 Michigan primary.

Together with Gov. Gretchen Whitmer, he flipped Michigan’s governor’s mansion blue in 2018 by 10 points. On Friday, the 6′ 8″ lieutenant governor arrived in Detroit’s Arden Park neighborhood carrying treats to celebrate the opening of a Biden field office here.

“The path to turning Michigan blue starts in neighborhoods like this one,” he told a cheering audience of staff and volunteers.

Gilchrist says in 2018, ground game and showing up in communities mattered when the votes were counted.

He also says it’s important to make a pitch to millenials that’s not just focused on Biden or Obama’s identity, but also on what their administration achieved for young people, like health care reform.

“It was important he served alongside Obama,” Gilchrist told NPR. “What also matters is the substance of what he delivered for people.”

Bringing young people into the fold and letting them take some ownership of the campaign will also be critical, Gilchrist says.

That fall, she was living with a friend, bouncing from place to place for the first time. Powell was working three jobs, trying to get back on her feet.

On Election Day, she had car trouble and had to pick up her niece, so she just didn’t make it to the polls.

Powell says she didn’t like Trump or Clinton and figured her vote didn’t count for much anyways.

“Whether I do this or not, this country’s going to run the same way, it’s going to look the same way for me, so I didn’t feel like it would matter,” she said.

Since Trump’s election, Powell got involved with a non-profit called Mothering Justice that organizes around issues like paid sick leave and affordable childcare. The experience influenced her outlook on the political process.

She calls Biden “a wolf in sheep’s clothing.”

But if he’s the nominee, she’ll vote for him.

“I know that one day is not all of the work,” she says. “It’s just the tip of the iceberg, the beginning of the work.”

Powell says she’s ready to cast that ballot and then get back to work.