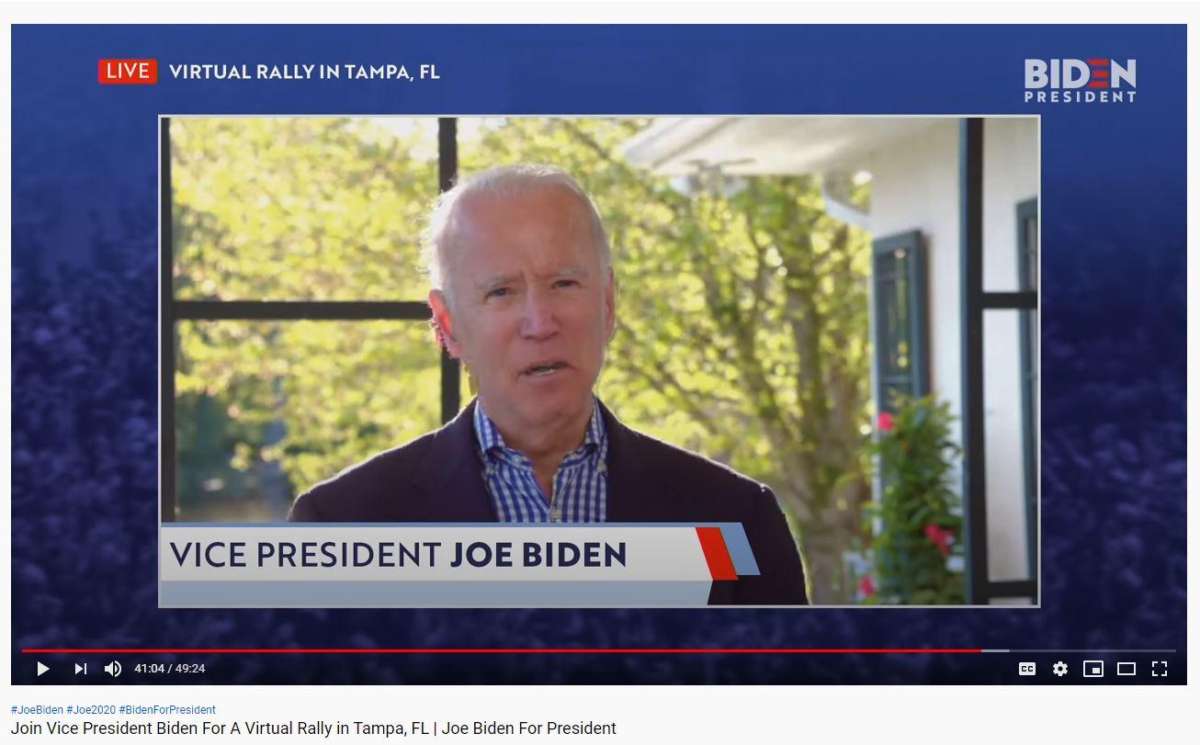 Democratic Presidential candidate Joe Biden took to the internet with his first “virtual” rally late Thursday, billed as being from Tampa. But this new way of campaigning in the age of coronavirus could use a bit of tweaking.

The campaign tried to keep it as close to an in-person rally as possible. First, anthemic Bruce Springsteen music sounded as the screen showed a smiling Biden, with suggested levels of monetary support.

The event started 15 minutes late. And the announcer’s introduction that welcomed people to Tampa and thanked people for joining was the least glitchy part of the rally.

After patchy computer video appearances from Florida Democratic Chair Terrie Rizzo and Larry Bowden, Biden’s Florida regional organizing director, a startled student from Jesuit High School in Tampa missed his cue when it was time to say the Pledge of Allegiance.

Viewers then spent several minutes listening to music as slick Biden campaign photos were interspersed with close ups of a man named “DJ Jack” on the rally’s screen.

Like the student, other speakers like Tampa State Senator Janet Cruz and Congresswoman Kathy Castor of Tampa didn’t seem to know it was their turn to speak from their homes. Or the audio and video links from their different locations didn’t sync.

Congressman and former Governor Charlie Crist took to the virtual stage, reminding the several thousand people watching that Florida has been pivotal in past presidential races.

“So, it’s this simple. You win Florida, you become president of the United States of America,” Crist said, in front of a backdrop of palm trees and condominiums. “And what’s at stake here, as the Vice President says himself, is the soul of our country. This is a fight for the soul of America.”

A pixilated Congresswoman Kathy Castor, D-Tampa, next spoke in a patchy audio about Biden’s support of the Affordable Care Act. She said the vice president helped President Barack Obama lead the country out of its last recession.

Then, Biden appeared on a sunlit porch, apparently outside his home in Delaware. It was the first time he addressed Floridians since he became the presumptive Democratic nominee.

That too, was a glitchy affair.

“Did he introduce me?” Biden asked to someone off camera. “Good evening, Tampa. Thanks for tuning in. I wish we could have done this together, but I’m grateful we’re able to connect virtually.”

He then spoke for 11 minutes, fighting glitchy audio and loud birds. He attacked President Donald Trump for not rising to the crisis posed by the coronavirus. He disparaged the ways minorities have been unfairly affected by job closures and a lack of emergency loans for black-owned small businesses.

He had spoken – virtually – earlier Thursday in Jacksonville with black Democratic leaders.

“In Florida, more than 1.7 million have filed for unemployment support. But over 70 percent of them have been ignored,” he said. “In the thick of this crisis, Florida has the worst rate of filling unemployment claims of any state in the country.”

He blamed the breakdown of the unemployment compensation system on Sen. Rick Scott, who was Florida’s Republican governor when the troubled computer system was installed.

Biden ended on a high note, serenaded again by the birds near his porch.

“We need to remember who we are. We’re the United States of America. There’s nothing – nothing we cannot accomplish if we work together,” he said. “Come this November, we’re going to prove it.”

Through all the glitches, blacked-out screens and patchy sound, Joe Biden was heard in Florida once again.