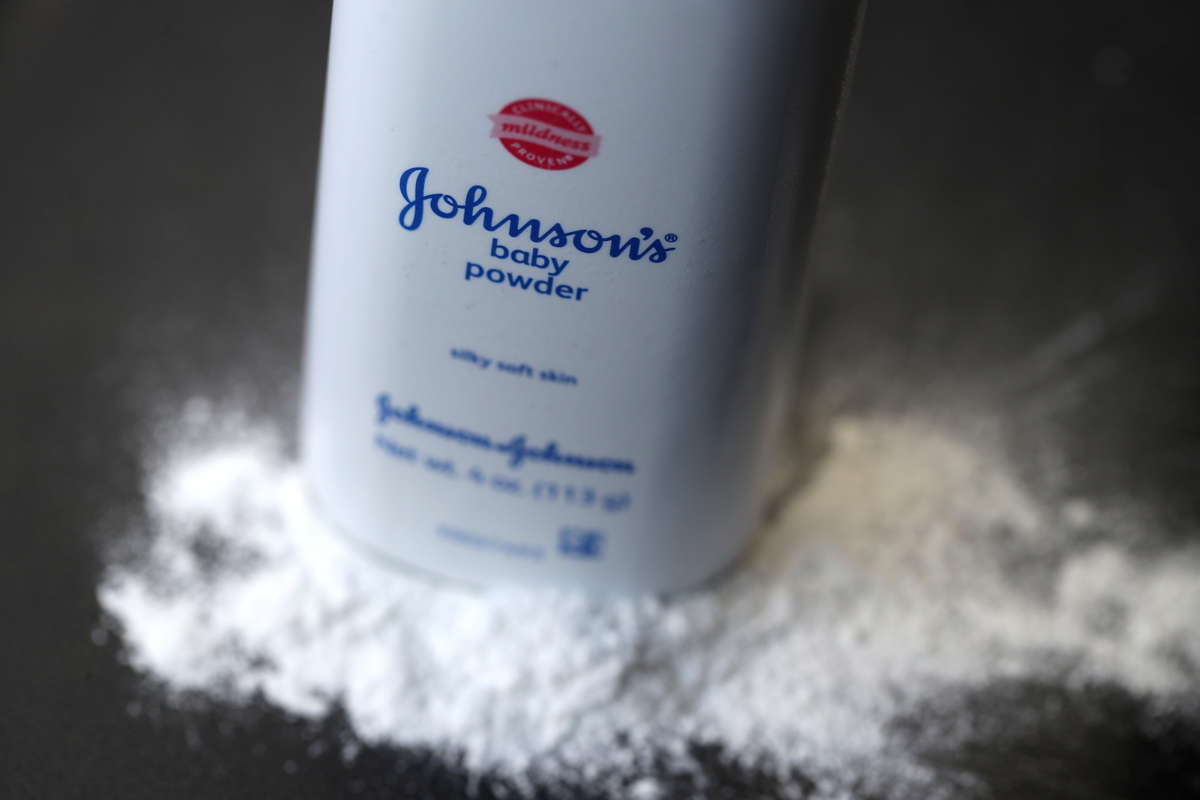 A bottle of Johnson & Johnson baby powder is displayed on a table. J&J pulled its iconic Johnson's baby powder off the shelves in the U.S. in 2020.
Image credit: Justin Sullivan

An attorney for Johnson and Johnson faced probing questions Monday over the corporation’s use of a controversial bankruptcy maneuver that has frozen tens of thousands of lawsuits linked to Johnson’s baby powder.

During the hearing, members of a three-judge panel of the United States Court of Appeals for the Third Circuit in Philadelphia asked whether J&J had used the legal strategy to gain “a litigation advantage” over roughly 40,000 cancer patients who have sued the company.

The cases were filed mostly by women. They claim Johnson’s iconic talc baby powder was contaminated with asbestos, which caused their mesothelioma or ovarian cancers.

J&J, which announced last month it would suspend all talc baby powder sales worldwide, has denied any wrongdoing.

Attorney Neal Katyal, representing the company, responded by arguing that the bankruptcy maneuver — known as the “Texas two-step” — would benefit victims by producing a faster settlement, possibly worth as much as $61 billion.

Katyal acknowledged criticism that a “big company that has all these profits is somehow trying to evade liability.”

But he said that if the tsunami of baby powder-related cases were allowed to play out in civil courts it would create legal chaos and “reduce the number of dollars available to claimants.”

The “Texas two-step” and how it worked for J& J

Here’s how the legal maneuver known as the “Texas two-step” worked in this case.

In October of last year, J&J — which is headquartered in New Jersey — used a wrinkle in Texas state law to spin off a new subsidiary called LTL.

The healthcare giant pushed all baby powder-related liabilities onto the new firm’s books.

Within a matter of days, LTL relocated from Texas to North Carolina and filed for bankruptcy, effectively halting the baby powder lawsuits.

The U.S. Appeals for the Third Circuit will eventually rule on whether LTL’s bankruptcy was filed in good faith and whether it should shield J and J from baby powder related lawsuits.

“Talc victims … are mired in bankruptcy as they die,” said attorney Jeffrey Lamken.

He noted that during the LTL bankruptcy process, Johnson and Johnson has paid out billions of dollars to shareholders and for stock buy-backs – a practice not allowed for firms that are actually bankrupt.

Meanwhile, women who filed cancer lawsuits against the corporation have been forced to wait and “can only get more desperate as they face medical expenses and come closer to their own deaths,” Lamken argued.

Attorneys representing cancer patients say the civil court system, not the bankruptcy court, is the proper venue for establishing the corporation’s liability.

This case that could reshape civil justice in the U.S

On Monday, a DOJ attorney argued that if this legal strategy is upheld by the courts, it would open the door to other non-bankrupt companies and wealthy individuals using similar maneuvers to avoid liability.

“If Johnson and Johnson can get away with this bankruptcy, what’s to stop any other company in America from doing the same thing?” asked Sean Janda, an attorney representing the U.S. Trustee, a division of DOJ that oversees bankruptcy cases.

J&J’s strategy has also sparked criticism from some members of Congress as well as public outrage.

Speaking late last year, Hanna Wilt who was sick with mesothelioma voiced fury over the delay in her baby powder lawsuit against the company.

“What I see is who can play the game best,” Wilt told NPR. “Big corporations trying to work the system in a way they don’t have to take full responsibility is not something new.”

Wilt died in February of this year at age 27.

It’s unclear how quickly the Third Circuit will rule, though judges tend to move quickly in bankruptcy-related cases. Legal experts have suggested that regardless of the outcome, an appeal will likely be filed to the US Supreme Court.