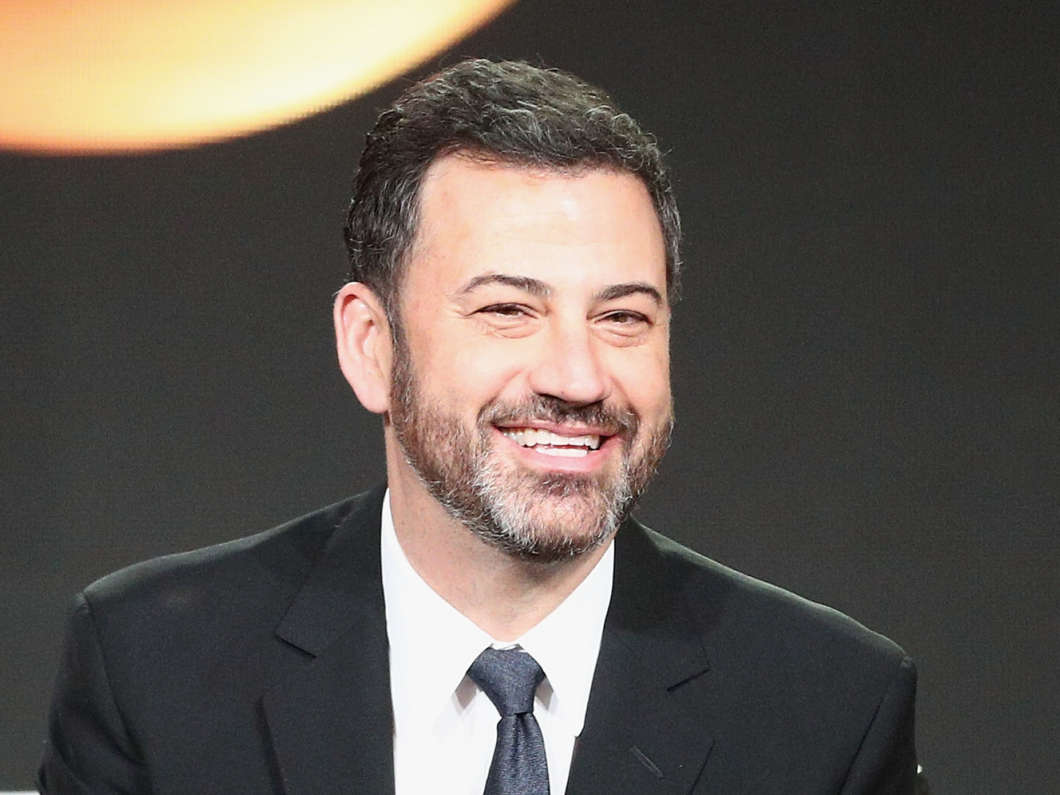 Jimmy Kimmel wants parents to know one thing about his debut children’s book: It takes just five minutes to read.

Kimmel is all too familiar with bedtime negotiations … you know, where your kid asks to read five books, and you try to compromise at three, but, let’s be real, you end up reading five. “You never win,” Kimmel says.

The comedian has spent his late night career cracking up adults, but The Serious Goose is aimed at a younger audience — most notably, the two silly geese of his own, Kimmel’s youngest kids, Jane and Billy. The idea for the book — which asks kids to help get a serious goose to crack a smile — came from a nickname Kimmel has for his daughter.

“I’d ask her: ‘Today, are you a serious goose or a silly goose?’ It was really kind of a way of getting her out of a bad mood …” he says. “I liked trying to change her from the serious to the silly goose.”

This sweet and silly book was preceded by a scary and serious event: Kimmel’s son Billy was born with a congenital heart defect and underwent heart surgery as a newborn. All proceeds of the book will go to Children’s Hospital Los Angeles and other children’s hospitals around the country.

On illustrating the story himself

On whether he prefers adult audiences or kid audiences

Adults are much, much harder. If I could do a kids’ show, I’d be perfectly happy. Kids are always ready to laugh. It’s an interesting thing — when you host a talk show and you start out most people don’t know who you are. So you can go out on the street and you can have fun with people, and you can take them by surprise. But when people know who you are, they’re expecting something — and you don’t get that from kids. Kids are a clean slate when you meet them, and that’s weirdly refreshing.

On learning that his newborn son, Billy, would need heart surgery

It was really a shock. It went from me sending an email to the family saying, “Hey, he was born, William John Kimmel, here’s his weight, mother’s doing great, everybody’s fantastic,” to two hours later: “Hold up on that. I just need to tell you that not everything is great. And please just stand by and leave us alone for a few hours and I’ll let you know.”

On his decision to share this private story with the public

I know this is dumb but: [Years ago] I ran out of gas and I had to push my car like the last half mile to the gas station. … And the next morning I went on the radio and I told this … funny story about running out of gas. And I realized that one of the great things about being a comedian and having a show is: When something bad happens to you, you can make something good out of it. So I do try to see if I can make something good out of something bad, it’s my go-to reaction.

As I was sitting in the hospital, the Affordable Care Act was being threatened. And I decided that instead of just telling the story of Billy and thanking the doctors and nurses — which I definitely wanted to do — I would also tie it to the other families who aren’t as fortunate as we are, who don’t have that kind of medical care and the ability to leave their jobs for a week or however long they have to, and all of these things that I saw with the other parents at Children’s Hospital.

Sometimes I worry about that. I always used to worry about that. I never wanted to be the guy preaching to the choir. But when I got involved in the health care debate and in the gun control debate, I got branded in a certain way. And like it or not, that’s what it is.

So I see no reason to be even-handed anymore. I mean, I don’t think you can be even-handed. I think we’re in a situation — I really think we’re being attacked from the inside. And the idea of ignoring it just seems weird to me. It’s also the news of the day and that’s what our show does, is we talk about what people are talking about.

Will Jarvis and Samantha Balaban produced and edited this interview for broadcast. Beth Novey adapted it for the Web.