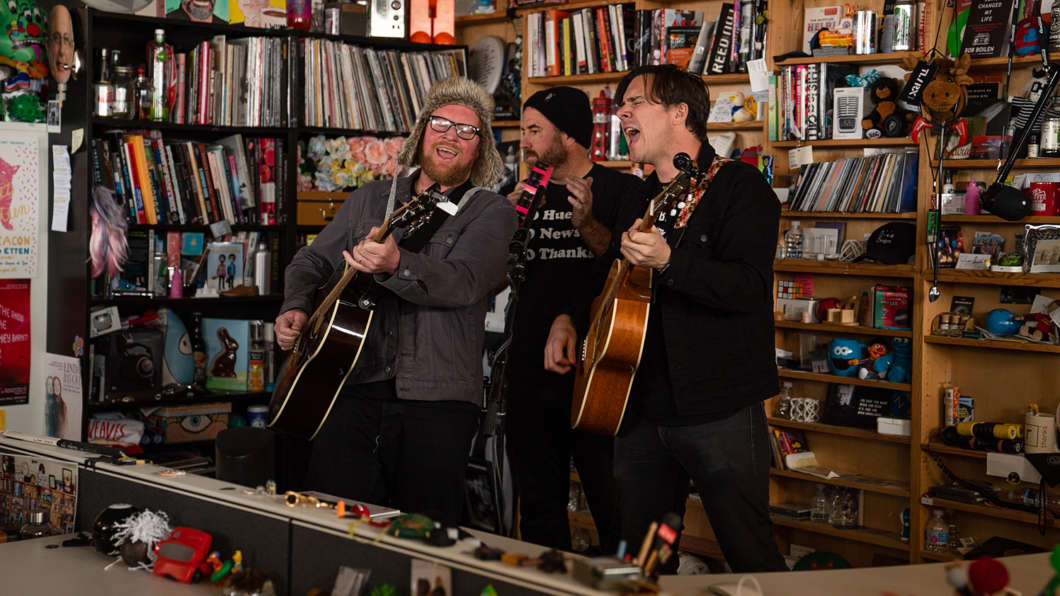 Jimmy Eat World showed up to the NPR Music office all smiles and no guitars, goofing off with toy instruments behind the Tiny Desk and cracking jokes. They borrowed a couple acoustics, a miniature gong and tambourine emblazoned with Bob Boilen’s face, which set the tone for a slightly silly, but altogether gracious performance.

For 27 years, Jimmy Eat World has been the rock band with a bleeding, beating heart. Both its music and message have evolved in kind, from brokenhearted ballads to anthems of self-empowerment and the lessons of age. Joined by touring multi-instrumentalist Robin Vining and percussionist Zach Lind, Jim Adkins opens the stripped-down set with “Love Never,” a song about the hard work of sustaining love, which was originally released as a 7-inch in 2018. Adkins’ and Vining’s harmonies ring out brightly, and then Lind rings the gong.

“All The Way (Stay)” comes from the band’s tenth album, Surviving. Many of these new songs reflect older Jimmy Eat World themes: “Your sense of self-worth coming from external validation is an empty pursuit,” Jim Adkins tells the crowd. So as guitarist Tom Linton joins the band, they launch into “The Middle.” Over time, this feel-good Bleed American single has remained a constant source of goodness in a sometimes bleak world. When the audience joins in for the last chorus, an uplifting catharsis streaked through our hearts as we all sang, “Everything, everything will be just fine / Everything, everything will be all right, all right.”