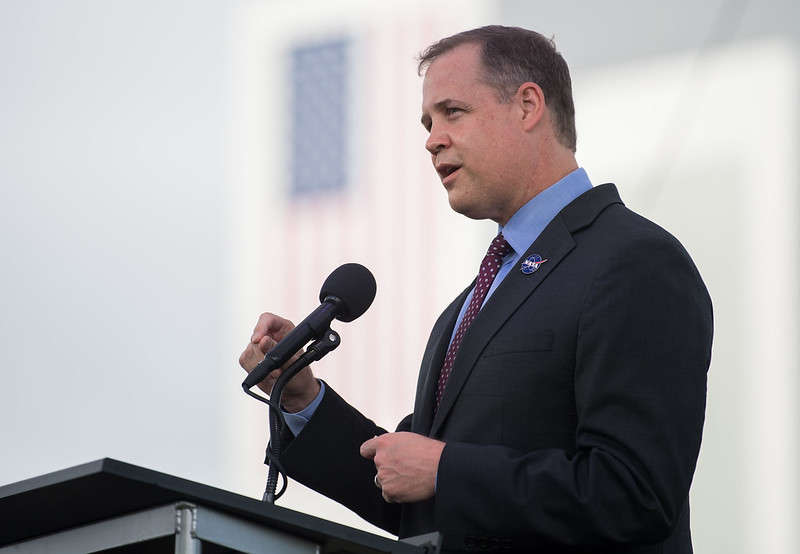 NASA Administrator Jim Bridenstine speaks to members of the media during a press conference ahead of the Crew-1 launch, Friday, Nov. 13, 2020, at NASA’s Kennedy Space Center in Florida. Photo: NASA

In his final address as NASA administrator, Jim Bridenstine thanked NASA workers for what he called “an amazing experience.” He also called for a continuation of the agency’s ambitious goal to land humans on the moon.

After his nomination, Bridenstine faced criticism across the aisle, especially from then Senator Bill Nelson. Bridenstine was serving as a Republican Congressman and critics said nominating a politician to the position would politicize the office.

Instead, he found widespread support in his nearly three years on the job. He was able to convince Congress to increase NASA funding and expedited the agency’s new moon-shot.

It has been my great honor to serve as your @NASA Administrator. I will miss the amazing NASA family and will forever be grateful for my time at this incredible agency. Ad astra. pic.twitter.com/Zba4MTawPV

Under Bridenstine, commercial partnerships expanded and NASA, leveraging a partnership with SpaceX, launched the first humans from the U.S. since the end of the Space Shuttle program. In his address, Bridenstine urged for unity as a new administration takes the reins and asked for support as the Biden administration continues NASA’s moon shot.

“If we eliminate division, and we can get the the bipartisan a political consensus with commercial partners and international partners, I think it sets us up in a great position to move forward in a meaningful way that crosses not just multiple administrations, but multi decades, and in fact, multi generations,” said Bridenstine in a video message posted to Twitter.

Holding back tears, he thanked the NASA workforce. “This was this was, as you know, the job of a lifetime. I don’t know how I will ever match it again, for all of my years.”

It’s unclear who President Biden will nominate for the now-vacant position. NASA’s Steve Jurczyk  is currently serving as the acting administrator of the agency.