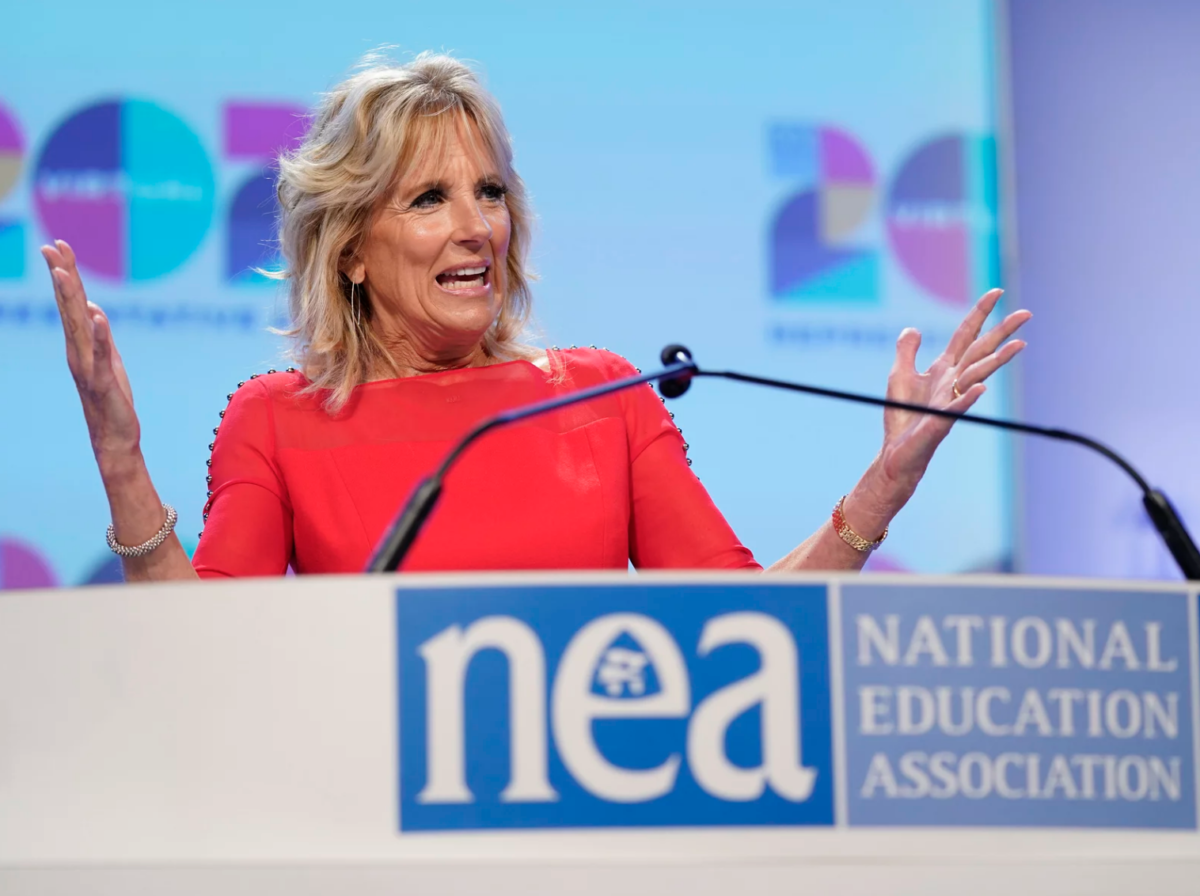 WASHINGTON — Jill Biden is going back to her whiteboard.

After months of teaching writing and English to community college students in boxes on a computer screen, the first lady resumes teaching in person Tuesday from a classroom at Northern Virginia Community College, where she has worked since 2009.

She is the first first lady to leave the White House and log hours at a full-time job.

“There are some things you just can’t replace, and I can’t wait to get back in the classroom,” she recently told Good Housekeeping magazine.

The first lady has been anxious to see her students in person after more than a year of virtual teaching brought on by a pandemic that continues to challenge the Biden administration.

The nation’s early first ladies did not work outside the home, especially when home was the White House. They supported their husbands, raised children and performed the role of hostess.

Some first ladies acted as special ambassadors for their husbands. Eleanor Roosevelt was especially active, traveling around the U.S. and reporting back to President Franklin D. Roosevelt, whose activities were limited by polio. She advocated for the poor, minorities and other disadvantaged people, and began writing a nationally syndicated newspaper column from the White House.

More recent first ladies, like Laura Bush, who was an elementary school teacher and librarian, had stopped working outside the home after having children and were not employed when their husbands were elected. Hillary Clinton and Michelle Obama were working mothers who decided against continuing their careers in the White House.

Jill Biden, 70, is forging a new path for herself and her successors.

The first lady has said she always wanted to be a career woman. She taught at the Virginia community college during the eight years that her husband was vice president and was not about to let the added responsibility of being first lady force her to give up a career she so closely identifies with.

Women made up nearly half, or 47%, of the U.S. labor force in 2019, according to Catalyst, a women’s workplace advocacy group.

Leaders of the nation’s largest teachers’ unions are pleased that one of their own is now in a position to help influence the administration’s education policies and raise the profile of a profession in which many have long felt unappreciated.

“She sees it up close and personally and now, in the position as first lady, not only does she give voice to that from a place of understanding, she has an opportunity to create a platform and to have influence,” said Becky Pringle, president of the National Education Association.

President Joe Biden told teachers attending the NEA’s annual meeting that he learned about what they were going through by watching his wife as she learned how to teach online.

“It gave me an appreciation firsthand that I thought I had, but I wouldn’t have had had I not seen it,” he said at the July meeting. “And then going out and teaching — she was working four or five hours a day, getting ready to teach, putting her lesson plans together … a different way.”

In 1976, a year after she met and began dating then-U.S. Sen. Biden, Jill Biden started teaching English at a Roman Catholic high school in Wilmington, Delaware. She later taught at a psychiatric hospital and at Delaware Technical Community College.

She earned two master’s degrees and a doctorate in educational leadership during those years.

After Joe Biden became vice president in 2009, she joined the faculty at Northern Virginia Community College. She continued to teach there after he left office and throughout his 2020 presidential campaign, including virtually after the pandemic hit.

Her virtual teaching continued as first lady, from her office in the White House East Wing or hotel rooms when she traveled to promote administration policies. She grades papers on flights.

“It shatters the norms of what first ladies do,” said Randi Weingarten, president of the American Federation of Teachers.

Jill Biden tries to keep her political identity out of the classroom and has said that many of her former students in Virginia had no idea she was married to the vice president. She also did not talk about it. Secret Service agents accompanied her for security, but she had them dress casually and tote backpacks in an attempt to blend into the campus environment.

But being first lady, for which there is no job description or pay, comes with a much higher level of visibility, security and scrutiny.

First ladies make numerous public appearances — with or without the president — to promote their own or the president’s issues, garnering coverage from national and local news media. Vogue magazine splashed the first lady on the cover of its August issue.

Jill Biden will teach on Tuesdays and Thursdays, with travel on days when she is not in the classroom. Her employer, the commonwealth of Virginia, requires everyone to wear face coverings indoors on Northern Virginia Community College campuses, regardless of vaccination status. The first lady is fully vaccinated.

The school is offering fall classes in a variety of formats, including fully remote, in-person on campus and a hybrid.

Anne M. Kress, president of Northern Virginia Community College, said she looked forward to welcoming the students and faculty, including Jill Biden, for the fall semester and expressed gratitude for their commitment to “excellence in instruction and equity in opportunity.”

“Their belief in our students is deep, real, and transformational,” Kress said.