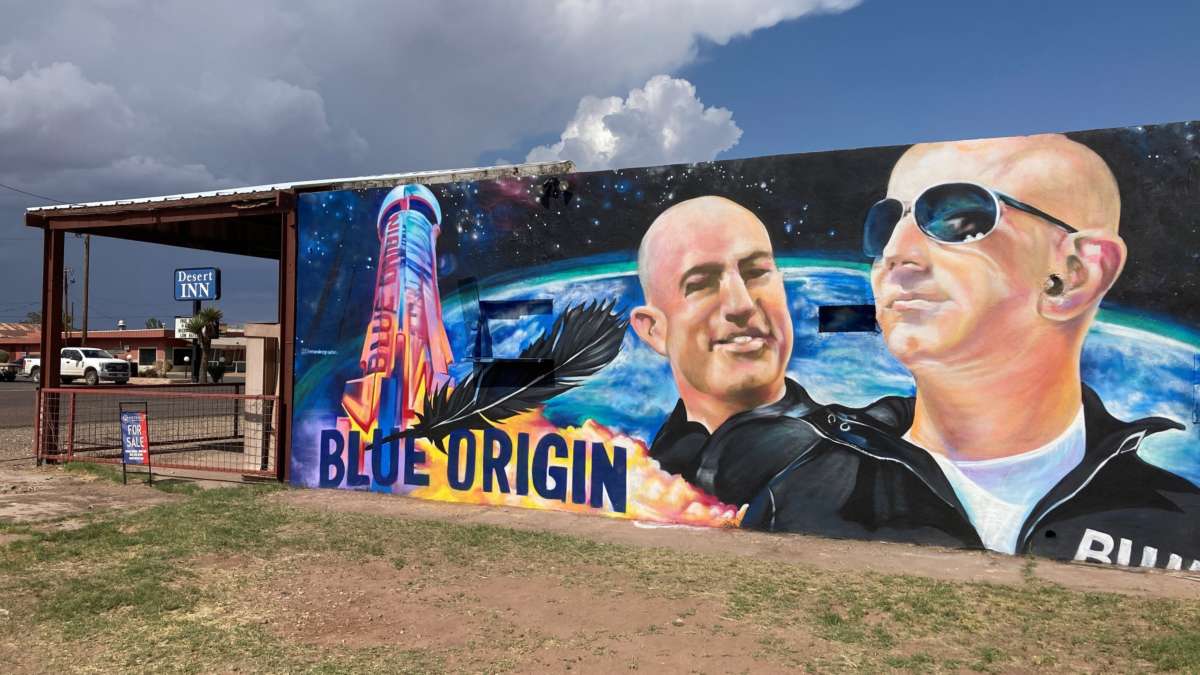 The side of a building in Van Horn, Texas, is adorned with a mural of Blue Origin founder Jeff Bezos over the weekend. Bezos is set to launch into space from Blue Origin's facilities in the town Tuesday morning.
Image credit: Sean Murphy

Jeff Bezos is set to become the second billionaire this month to reach the edge of space, and he’ll do so aboard a rocket built by a company he launched.

The founder of Amazon, who stepped down as CEO earlier this month, is scheduled to lift off early Tuesday with three crewmates on the maiden flight of Blue Origin’s New Shepard launch vehicle.

Riding with Bezos on the planned 11-minute flight will be his brother, Mark Bezos, as well as the oldest and youngest people ever to fly into space – 82-year-old pioneering female aviator Wally Funk and Oliver Daemen, an 18-year-old physics student. Daemen, whose seat was paid for by his father Joes, the CEO of Somerset Capital Partners, was put on the crew after the winner of an anonymous $28 million auction for the flight had to postpone due to a scheduling conflict.

How to watch the flight

New Shepard is set for lift off from the company’s facilities in Van Horn, Texas, at 9 a.m. ET. Blue Origin will have coverage on its website starting at 7:30 a.m. ET.

The date of July 20 for the inaugural flight is significant – it’s the same day in 1969 that Neil Armstrong and Buzz Aldrin aboard Apollo 11’s Eagle became the first humans to land on the moon.

Bezos will travel deeper into space than Richard Branson

If all goes well, New Shepard’s suborbital flight will take the crew past the Kármán Line, the internationally recognized boundary of space, at nearly 330,000 feet, or roughly 62 miles above the Earth. That will give Bezos and Blue Origin — which he founded in 2000 — bragging rights over Virgin Galactic’s Richard Branson, whose flight earlier this month aboard Galactic Unity 22 hit a peak altitude of around 282,000 feet, surpassing NASA’s designated Earth-Space boundary of 50 miles, but falling well short of the Kármán Line.

Besides the altitude, the New Shepard launch has some other key differences with Branson’s July 11 flight: instead of lifting off from a pad, Galactic Unity was dropped from under a specially designed aircraft at about 50,000 feet before firing its ascent engines. The Virgin Galactic spacecraft also glided back to Earth for a Space-Shuttle-like runway landing.

By contrast, the 60-foot tall New Shepard launches like a conventional rocket and its capsule is designed to return home dangling from three parachutes in a manner similar to NASA’s human spaceflights of the 1960s and 70s. However, its booster will return to the pad for a soft touchdown so that it can be reused later. And the capsule, with Bezos and his crewmates aboard, will come back to the high plains of Texas using braking rockets, instead of splashing down at sea.

New Shepard, which is fully autonomous, is named after Alan Shepard, who in 1961 became the first American into space.

Elon Musk has hasn’t made it to space, but his company has

Once Bezos’ flight is complete, Elon Musk, the head of SpaceX, will be left as the odd man out in the billionaire space race. Even so, Musk’s SpaceX, which has flown astronauts to the International Space Station, is a heavyweight in the commercial space business compared with either Virgin Galactic or Blue Origin.

Branson and Bezos are hoping to tap into the potentially lucrative market for space tourism, while Musk is more focused on working with NASA, gaining market share in the satellite launch industry, and on his dream to send humans to Mars.

Even so, Musk turned up to watch Branson’s flight and has reportedly put down a $10,000 deposit to reserve a seat to fly on a future Virgin Galactic flight, where tickets are thought to go for $250,000 a pop, but it’s unknown if or when he will buckle in and blast off.