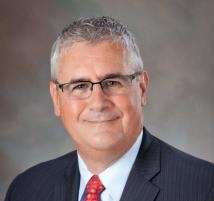 Jeff Ashton has admitted he had an Ashley Madison account, but he said he has no plans to step down. The state attorney for Orange and Osceola Counties said he logged into the website on his personal laptop using public wi fi at the courthouse complex.

Ashton’s use of the website was first reported by the East Orlando Post.   In a press conference on Sunday, Ashton said he signed up for the site two years ago.

“While I indulged my curiosity about the site, it never went beyond that,” said Ashton.

“While no laws have been broken, these were incredibly stupid choices.”

Ashton said his actions had caused ‘stress and heartache’ to his wife and children,  but he did not actually meet anyone through the website, and it had no bearing on his work.

“I regret that I have given ammunition to those who seek to discredit the work our office does,” he said.

“I am proud of the work and what we’ve accomplished thus far. But today I am not very proud of myself.”

Ashley Madison brands itself as “the most successful website for finding an affair and cheating partners.”

The mayor has asked county I.T. staff to comb through the database of Ashley Madison account holders that was released by hackers.

Ashton said he would prosecute anyone who used county resources – such as a county credit card- to access the site.

“I think we would still prosecute it, because that is a crime,” he said.

“As embarrassed as I am about what I did, I did not commit a crime, so I don’t see any difficulty with that.”