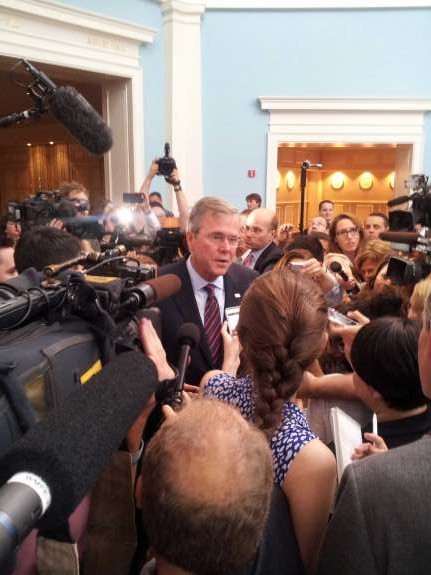 Jeb Bush talked to the media after speaking at an economic summit in Orlando last month. Photo: Matthew Peddie, WMFE

Bush, who served as Florida’s 43rd Governor from 1999 to 2007, has been criss-crossing the country in recent days- with stops in South Carolina and New Hampshire.

Bush says if he’s elected president he’ll apply the same conservative, small government principles that he did he did in Florida.

Political commentator Ed Pozzuoli, a former chair of the Republican Party in Broward County, said Bush’s experience will help him in the race.

“In a state like Florida that has both diverse population, a diverse economy and is geographically diverse, it’s a great microcosm for the type of leadership that he would bring to the White House,” said Pozzuoli.

“Candidates, especially like Jeb Bush, who have strong values and principles, who have experience and led a diverse population like Florida from that principled position, all of that bodes well over time,” he said.

Bush begins his visit to Central Florida with a meet and greet with church leaders in Orlando- followed by a small business tour and meet and greet in Longwood and Maitland.