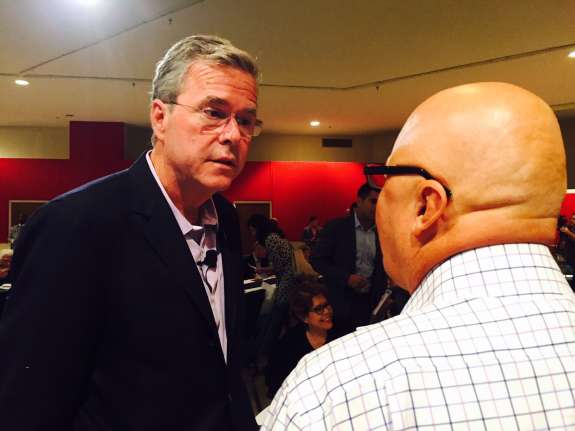 Jeb Bush talks with community and faith leaders during a swing through central Florida./Photo: Catherine Welch

Jeb Bush told a crowd of faith leaders that rounding up people in the country without papers is not an American value. The Republican presidential candidate made the statement during his swing Monday through central Florida.

At a Spanish speaking church in Orlando, Bush touched on religious freedom, reforming the tax code and education. He also dove into immigration saying the border needs tightening and there needs to be a path to a legal status for the country’s 11 million undocumented immigrants.

“You have to have a path to earn legal status, where people get a provisional work permit, they come out from the shadows,” said Bush. They work, they pay a small fine, they pay taxes, they don’t receive federal government assistance, and over some extended period of time they earn legal status.”

Answering questions from the crowd, Bush said Puerto Rico should have statehood and residents full citizenship.