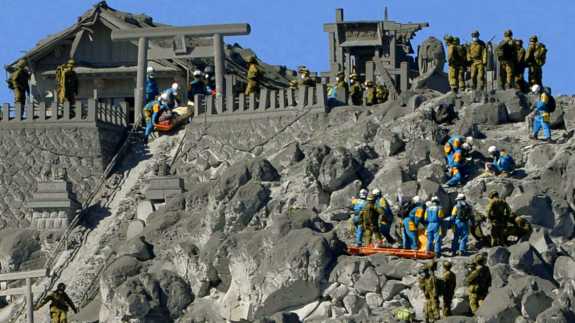 A photo taken from a Kyodo News helicopter shows Japan's Self-Defense Forces personnel rescuing climbers who were in critical condition near the top of Mt. Ontake Monday, before rescue operations were suspended.

The volcano whose eruption surprised hikers in central Japan Saturday sent a plume of ash and gas more than 1,500 feet into the air Monday as it continued to erupt, officials say, complicating efforts to find victims and survivors. Rescue efforts have again been halted; at least 36 people are feared dead.

Hitting just before noon Saturday, the eruption stranded people who had been ascending Mt. Ontake to take in views of the colorful fall foliage. But they suddenly found themselves in peril, as the volcano erupted and a huge cloud of ash rolled down the mountain.

More than 200 people eventually reached safety, but officials are unsure how many others might still be on the mountain. They’re reportedly investigating cars still that are in parking lots near the mountain’s base for clues of how many hikers remain stranded on its heights.

The incident has raised questions about any warnings people might have had that a large eruption was imminent. From Tokyo, John Matthews reports for NPR:

“Officials at the Japan Meteorological Agency say they sent messages to communities surrounding Mt. Ontake on the 11th of this month, warning them about a recent increase in volcanic earthquakes.

“Follow-through after receiving the warning varied from community to community, according to national broadcaster NHK. Most important, however, the volcano’s warning status was left at its lowest level until Saturday’s eruption.”

While the 10,000-foot Mt. Ontake is known to be active, the last large eruption before Saturday’s was back in 1979.

The eruption has led to calls for increased research and monitoring of Japan’s more than 100 volcanoes. But as The Yomiuri Shimbun reports, predicting volcanic activity is notoriously difficult.

As an example, the newspaper says, no data predicted Japan’s Mt. Shindake would erupt in August, despite the volcano being in one of the few regions that are under “full-fledged volcanic observation.”

The people who survived Mt. Ontake’s eruption are describing scenes of desperation and solidarity, as hikers crammed into lodges and huts on the mountainside.

“I was able to survive because many people took care of me,” a 52-year-old man tells The Asahi Shimbun, after saying he had been certain he was about to die.

“It was as if hell was unleashed,” says Fumio Seko, 67, who manages a small hut that sheltered dozens of people. He tells the newspaper that he spent hours convincing one woman who had lost contact with her husband to leave with other climbers, for her own safety.

After all the hikers were gone, Seko says, he and the rest of the staff cleaned the place up and spent the night. They were rescued by helicopter the next morning.