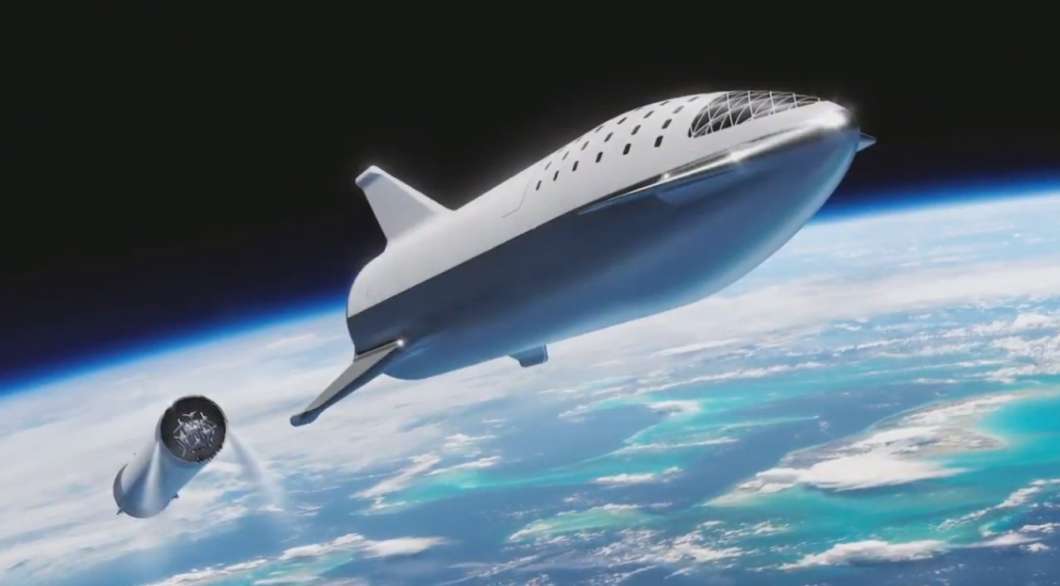 A rendering of the Big Falcon Rocket, or BFR, at a company announcement September 2018. Photo: SpaceX

SpaceX announced its first paying customer on a trip around the moon — a Japanese billionaire who could make the lunar trip in 2023.

The rocket is still under development, but Musk says Maezawa purchased a trip for himself and six to eight artists. The trip would take the party on a trajectory around the moon and come close to the lunar surface.

“The exact mission profile has not been decided but I think it would be exciting to skim the surface, come real close, zoom out far and then come back around,” said Musk at an announcement Monday at the company’s headquarters in Hawthorne, California.

The almost 400 foot tall rocket is still in the development stages. Musk said the total cost of the development of rocket will likely cost $5 billion but could cost as much as $10 billion as development progresses.

SpaceX has a revenue stream to help pay for the rocket. The company plans to use profits from commercial and government launches of its Falcon 9 rocket and revenue from a future satellite internet constellation called “Starlink.” Musk said about 5 percent of the company’s budget is going to BFR development, and that will soon increase.

Laura Forcyck, space analyst and founder of Astralytical, said even with the money, there’s still a technical challenge to build a brand-new rocket system like BFR.

“Whether this project succeeds, even [Musk] couldn’t say [Monday] night, he said he was going to try to do everything humanly possible to make this flight happen, but it might not.”

Musk says SpaceX is targeting a launch in 2023 and preliminary tests of the BFR will happen next year. The rocket could launch from Florida’s space coast, but Musk said the company hasn’t decided on a launch pad just yet.

“In terms of looking at all the spaceports around the world, Kennedy Space Center would be one of the top, if not the top, candidates for a launch such as this,” said Forcyck. “But it’s not the only candidate.”  SpaceX could use a brand new launch site in Texas or send the BFR into space from a barge at sea.

Despite the budget and technical challenges, Forcyck said Musk is changing the way people think about who can, and will, go to space.

“I think that this project, whether it goes or not, will open up people’s eyes as to who is eligible to go to space. When we think about astronauts we think about highly technical people, but the reality is in the future anybody will be able to fly.”